Moab, Utah – The desert landscape is painted with shades of red, orange, yellow, brown, and green. Adding to the color palette of the desert are bacteria, funghi, algae, and mosses that have found a way to live there despite the harsh conditions. The habitat of these organisms consists of a layer of soil only a couple millimeters thick, which scientists call the bacterial biocrust.

“Biocrusts are dominated by photosynthetic organisms,'' explains Marc Van Goethem, a postdoc at the Northen lab at Lawrence Berkeley National Laboratory. Every biocrust organizes around a central species, commonly cyanobacteria from the Microcoleus family. Microcoleus cells are able to turn light and carbon dioxide into carbonated sugars that are necessary for life and are particularly rare in arid deserts. The carbon generated by the Microcolei attracts an ensemble of other species that collectively form the biocrust. These other species in turn help the Microcolei by providing nitrogen, another chemical element that is crucial for life but that the Microcolei alone cannot synthesize.

The biocrust is more complex than an assembly of microbes, however. Jacob Jordan, research assistant at the Northen lab, defines the biocrust as “a change in topology of the soil.” Indeed, due to their complex interactions, the biocrust microbes organize in a way that modifies the structure of the soil itself. The Microcoleus cells cluster in bundles which are visible to the naked eye. By secreting a glue, they gather in a tight mesh that gives the soil physical integrity. This process helps slow down land desertification by preventing soil erosion and retaining nutrients and water in the soil, making the desert land a more viable habitat in the long term.

The biocrust is also well-adapted to a rare but recurring perturbation: rain. Dormant most of the time, the entire community wakes upon the first drops of water. Microcoleus cells can sense moisture and migrate towards the wet soil surface. They start liberating sugars for other species to feed on, and the entire community becomes metabolically active.

Researchers at the Northen lab are working to figure out what exactly happens to the biocrust community during these rain episodes. To investigate, they collected biocrust samples from a desert in Utah, submerged them in water to mimic a rain event, and watched them recover. At different times during the process, they also collected DNA which enabled them to count the number of individuals of every bacterial species in the community. The numbers yielded a concerning result: the Microcoleus family, the cornerstone of the community, was rapidly declining and being replaced by a new bacterial species from the Bacillus family. This new species, unlike the Microcolei, does not provide the sugars necessary to the other organisms in the community and therefore the Bacilli “are going to face challenges because resources are not sustainable,” emphasized Van Goethem. He anticipated that “their population [would] go down . . . and things [would] slowly return back to equilibrium”, with Microcolei as the majority species in the community. However, the specific mechanism that restores the original balance of microbial populations remained mysterious.

After further probing, Van Goethem made an interesting discovery: viral DNA was also present among the bacterial DNA in the biocrust samples, suggesting the presence of viruses in the community. Like our human cells, bacteria can be infected by viruses called bacteriophages. These viruses replicate themselves inside the host bacterium and eventually burst the cell to propagate and infect other bacteria. If bacteriophages are fairly common, particularly in soil, no one had reported their presence in the biocrust before Van Goethem. He attributes the novelty of his discovery to a numeric tool that was recently developed in his institute, which allowed him to find the needle, which is viral DNA, in the haystack of genetic information coming from the bacteria. The bacteriophages that Van Goethem uncovered seem to specifically target the Bacillus bacteria, the species that is taking over the founding Microcolei. Even if it is too early to say with certainty, Van Goethem imagines that viruses could be the missing link that explains how the biocrust is restored to its original state after each rain episode, going back to holding the soil together during drought and blooming during rainfalls.

Van Goethem’s discovery of the role of bacteriophages in maintaining the biocrust balance highlights how much is still to unravel about the functioning of these communities. However, one thing is already certain: while the biocrust is well adapted to rainfall, it is vulnerable to simple mechanical perturbations, like a single human footstep. Van Goethem and his coworkers hope that their research will contribute to raise awareness about the existence of these soil communities and their need for protection. 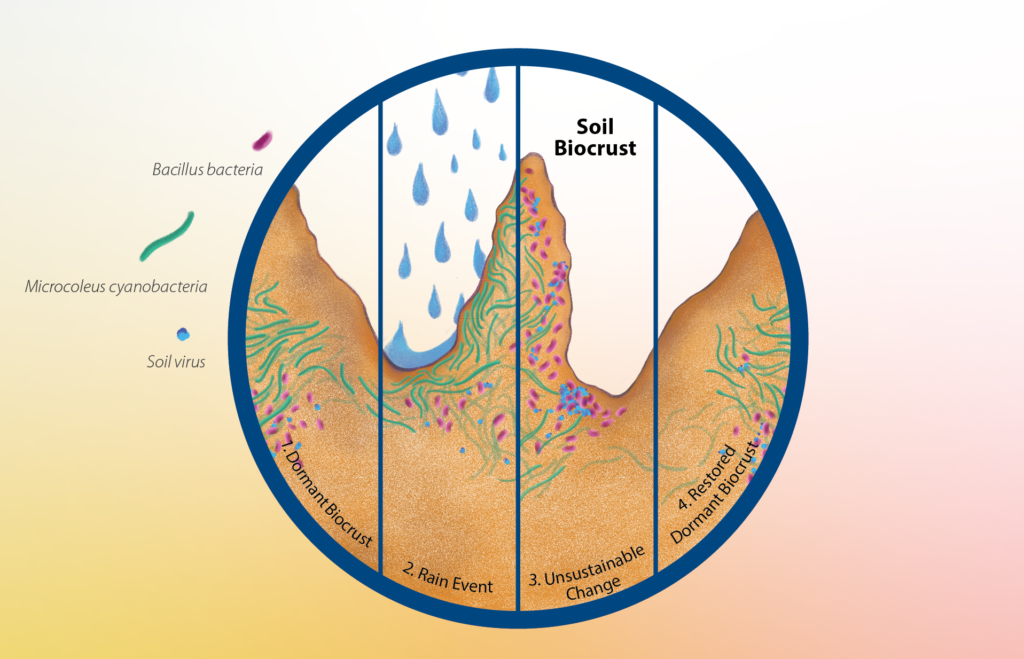 Marie-Cécilia Duvernoy is a postdoc in biophysics