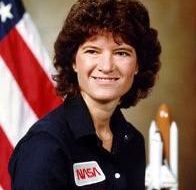 Sally Ride was the first American woman in space, first entering the Earth’s orbit in 1983. After leaving NASA, she became a professor and dedicated herself to early science education. She continued to be involved in the space program, including after the Challenger and Columbia disasters struck. She died on Monday, July 23rd, 2012 at the age of 61 of pancreatic cancer, leaving behind her partner, Tam Elizabeth O’Shaughnessy.

I know more than one person who was inspired to become a scientist because of Sally Ride. Speaking to them, they rarely pointed to the barriers she broke, but rather, the integrity she demonstrated throughout her life. In addition to her work on science education, her work with NASA exemplified conscientious leadership. Her support for Roger Boisjoly, the whistleblower who predicted the Challenger disaster, must have come at a price.
READ MORE ARTICLES