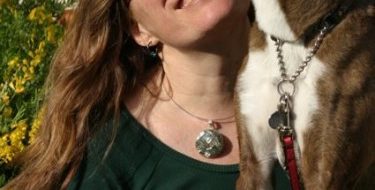 Amy had always had a “personal obsession” with animals, but she felt particularly in tune with dogs, and started informally training dogs in the 1990s. Adopting a dog with special needs opened her eyes to the complexity of animal behavior. “I thought I could train any dog…but then I realized, I didn’t know what the hell I was doing. I knew how to train dogs to do stuff, but this dog had severe anxiety – she was afraid of people, the outdoors, everything.” That was when Amy became interested in more sophisticated behavior modification techniques. She attended the renowned San Francisco SPCA Academy for Dog Training, and then received her Bachelor’s Degree in Psychology from Mills College. At the time, Amy didn’t consider attending graduate school, and instead founded her business Full Circle Dog Training. She worked with dogs for almost another decade before finding herself with the opportunity to study dog behavior on a more formal, theoretical level, as a graduate student with Dr. Jacobs.

Amy’s first research project at Berkeley was a collaboration with Anna Waismeyer and Alison Gopnik examining causal inference in dogs. Causal inference is the ability to reason that one thing is the cause of something else, for example that pushing a doorbell causes a ringing tone in your house. While humans do this easily, the ability of other animals to do this is still an open question.
READ MORE ARTICLES