Genetic engineering is the direct manipulation of the genes of an organism. It has enabled researchers and manufacturers to tap into the existing machinery of living cells both to advance our understanding of basic science and to develop new products, including medicines and foods. Today, scientists program cells to tag their own proteins with fluorescent molecules
READ MORE ARTICLES 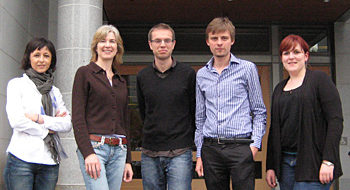 Our story begins in the 1980’s, an era defined by big hair, shoulder pads, and Miami Vice, and an era whose closing days would see a rather curious, unassuming discovery. Around this time, scientists found that sections of bacterial genomes contained repetitive sequences with no readily apparent function. These patterns contained palindromic repeats separated by clusters of 30 or so assorted bases termed “spacer DNA”. Researchers learned decades later that these spacer regions contained bits of viral DNA. The tipping point for this peculiar case came seven years ago when a team at Danisco discovered that by exposing S. thermophilus to bacteriophage DNA, they could alter the phage resistance of the bacteria. In the years following, a rather astounding story would unravel, one spearheaded by UC Berkeley’s own Dr. Jennifer Doudna and recently named a top contender (for the second year in a row) for Science magazine’s Breakthrough of the Year 2013.

As you, dear reader, have indubitably surmised from the title, the story above alludes to the tale of CRISPR. More formally known as “Clustered Regularly Interspaced Short Palindromic Repeats,” CRISPR is a novel genome editing technique based on the inherited, adaptable immune system of bacteria which has become red hot in the past two years (and a favorite topic of the BSR!).
READ MORE ARTICLES