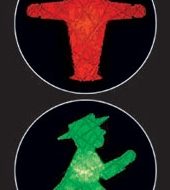 During the past month, I have been living in Germany and conducting research at the University of Hamburg. It has been an amazing opportunity! I visited Berlin last weekend and came across a pretty unique phenomenon: a city-wide obsession with a traffic sign! It seemed like everywhere I went, I saw stores dedicated to selling merchandise featuring the “Ampelmann” (translated as “traffic light man” in German) and restaurants selling food in the shape of the Ampelmann. Berliners love him, and even celebrities like Dennis Quaid have been spotted rocking Ampelmann t-shirts. How do you get a traffic signal to become a cult figure? You ask a psychologist to design it, of course! Though the Ampelmann wasn’t intended to be such a beloved and popular symbol of Berlin, its story is a fun look at how psychology is behind even the simplest and most mundane aspects of life.

In East Berlin in 1961, Karl Peglau, a traffic psychologist was hired to design a new traffic symbol. As a traffic psychologist, he had been researching the prevention of traffic accidents. At the time in East Berlin, road accidents were becoming more common, and the East German government was looking for an easy way to make travel safer. Peglau’s research had led him to conclude that different modes of transport – driving a car, riding a bike, walking – should be directed separately. Peglau suggested that a new system of traffic signs should be created, including a separate light that would only direct pedestrians. The government liked his suggestion, and he began to design the now-famous Ampelmann.
READ MORE ARTICLES