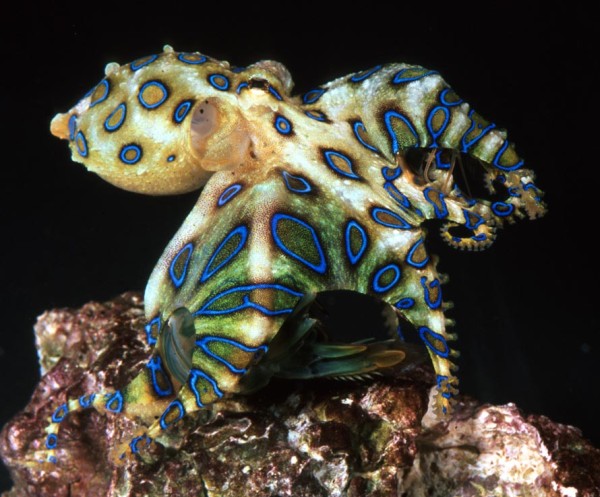 A native of Indonesia and the Philippines, the 2-cm-long male blue-ringed octopus (H. lunulata) is unable to determine the sex of potential mates. Photo courtesy of Roy Caldwell.

When it comes to sex, we humans are lucky. With a few notable exceptions, you and I can tell at a glance the gender of anyone we meet. That means we don’t have to waste time, energy, and expensive candlelit dinners on someone who might turn out to have the wrong plumbing. But life’s not so easy for the blue-ringed octopus (Hapalochlaena lunulata), as Mary Cheng and Professor Roy Caldwell of the Integrative Biology department have discovered. The males of these pygmy cephalopods (which, by the way, pack a deadly poisonous bite) are totally unable to determine the sex of another H. lunulata nearby. In fact, they’ll jump any other H. lunulata that wanders by, male or female, and have even been observed attempting interspecies mating (in that respect, they’re not so different from certain humans, who will remain nameless).

All this is not to say that H. lunulata males don’t wise up pretty quick if they’ve put the moves on another hombre. Male-male couplings, observed Cheng and Caldwell, typically last only 30 seconds, and the initiating octopus removes his hectocotylus (a modified third arm that delivers the spermatophore goods when the mood is right) amicably. But when luck is with him and he’s found a lady, he stays plugged in for an average of almost 3 hours, letting go only after the female fights him off.

This sexual blindness may have to do with the blue-ringed’s normally reclusive nature. They are “mostly asocial animals,” says Caldwell. “They do not encounter other individuals that often and it probably pays to check out potential mating partners whenever they are encountered.” Female H. lunulata can store sperm, but they use it only once, since as with most octopus species they lay a single clutch of eggs and then die. That’s one more respect in which we humans should consider ourselves lucky.