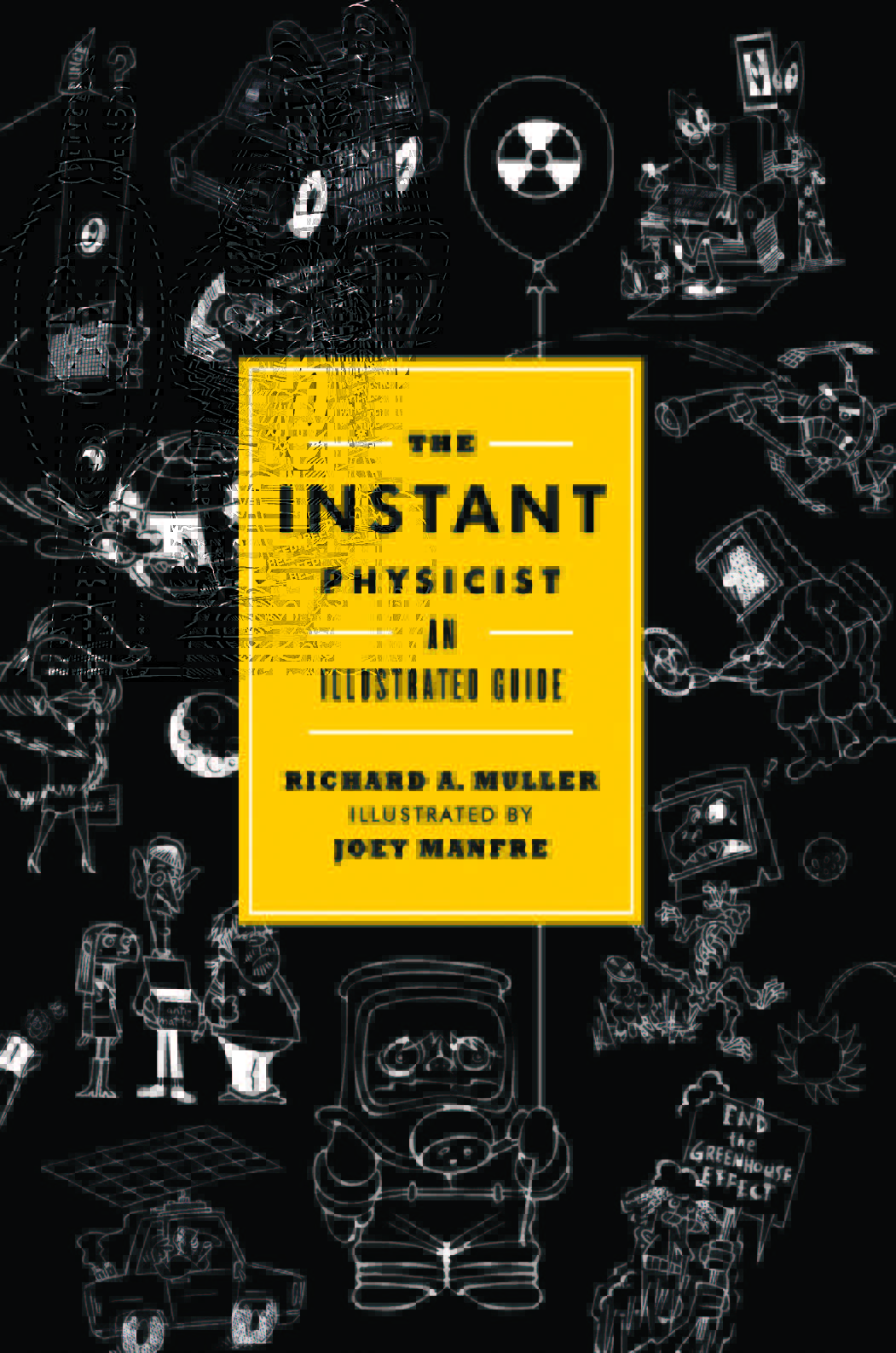 I was eager to open my copy of The Instant Physicist when it arrived. It was hardbound, colorful, and best of all – skinny.

With time always at a premium, a short volume that promises to help you “learn astonishing facts, win arguments with friends and relatives, make crazy-sounding bets and win money” in less than 150 pages sounds to good to me.

The book is written by Berkeley physics professor Richard Muller, whose popular class “Physics for Presidents” won best class two years in a row, and humorously illustrated by Joey Manfre.  Each two-page entry consists of a colorful cartoon on one side, and less than a page of writing on the other, making this an ideal book to pick up for only a moment or two at a time. After thumbing through just the first few pages, I already felt smarter for my new-gained knowledge of the easy-to-digest tidbits Dr. Muller presents.

After a few days of sporadic reading, and a curious thing happened; I began to reference the information I learned from the book – often. It is amazing just how easily arcane physics knowledge can be knitted into day-to-day conversation.  And when my pedantic friend started to read the book, he took the information and ran with it, holding multiple campfire audiences captive.

Some entries were fascinating and stood by themselves; some entries, however, left me hanging. I wanted more than the short entry and corresponding cartoon provided, and feared that the (sometimes shocking) snippets of information could be misinterpreted if extrapolated upon without additional influencing factors. One that hit me particularly hard was the entry about organic foods being more toxic than their pesticide-controlled counterparts due to the fact that the naturally occurring insect resistance selected for in organic plants are thousands of times more carcinogenic than the pesticides used in conventional agriculture. While I understand this logic, I am not quite ready to give up my eating habits based on a picture of a fly slapping a poison sticker on a barrel full of organic apples. But it did get me thinking. And perhaps that is what “The Instant Physicist” does best: providing food for thought and  presenting a slue of quick facts that causes an inquisitive mind to question conventionally held notions or seek further data on arcane snippets.

Some entries also felt more silly than fascinating; for example, it is interesting that a gram of chocolate chip cookies contains more energy than a gram of TNT, but the comment about giving chocolate chip cookies and sledgehammers to teenagers being more effective at destroying a car than blowing it up with TNT provides more silliness than knowledge. Then again, the book is about showiness as much as it is about the physics, and that is, in part, what makes the book enjoyable.  There are plenty of dry volumes without cartoons and silliness to go around, why not allow this book over the top?  I particularly enjoyed the entry about Pluto’s revoked planetary status. Who does give the International Astromical Union (IAU) the right to decide on a status that is older than IAU itself. Congratulations, Dr. Muller, for reinstating Pluto’s planet-ness with a 512 to 0 classroom vote. Despite the occasional groan or roll of the eyes this book gives exactly what it promises: instant physicist status.