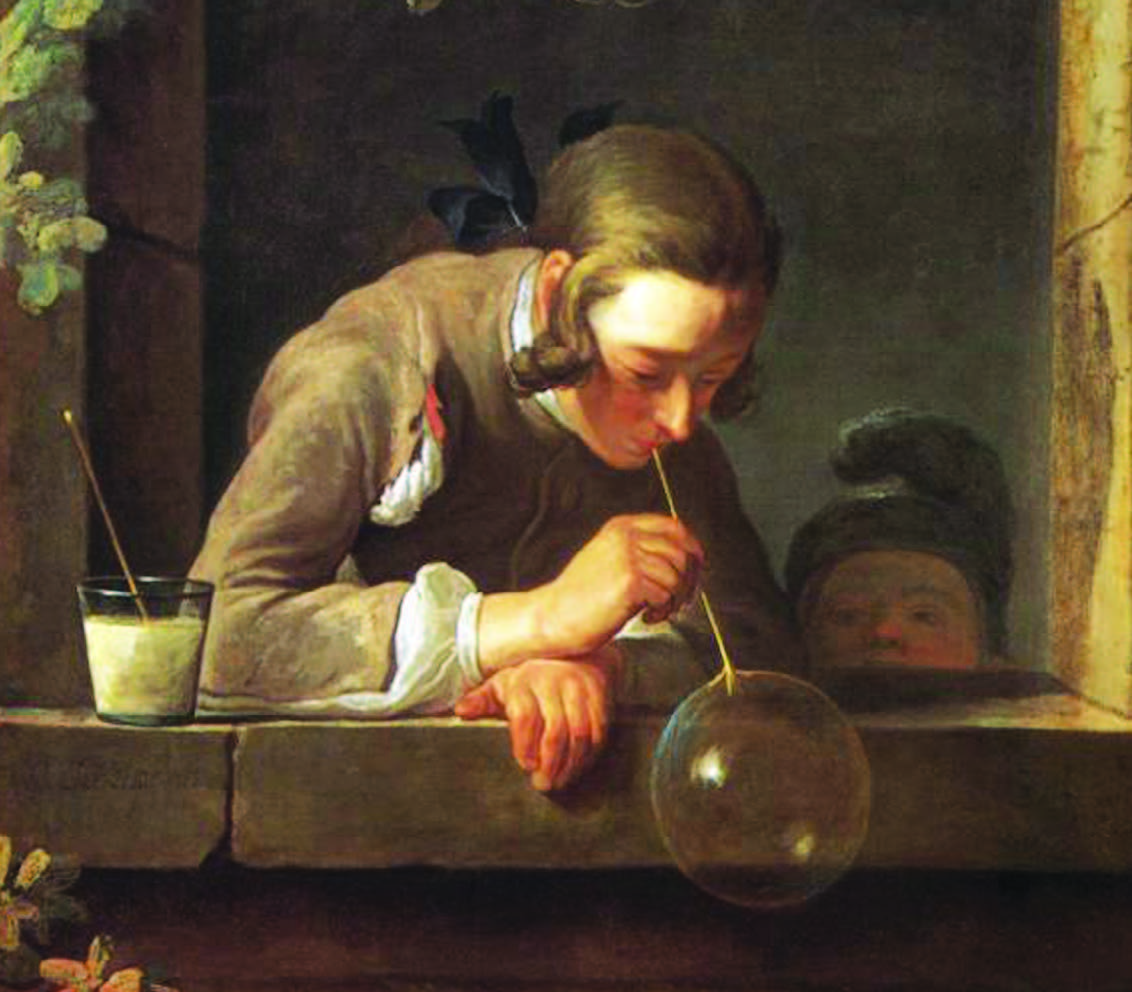 Kids love to blow soap bubbles: the bubbles can merge and retain their shape, sparkle with rainbow shimmers, and defy gravity. Yet these thinly stretched films are more than just fragile physical beauties: they embody on their delicate surfaces truly perplexing mathematical structures that have kept mathematicians fascinated for the past three centuries. Jenny Harrison, a professor of mathematics at UC Berkeley, has recently worked out the solution to a centuries-old mathematical problem that is best portrayed by soap films and, in doing so, uncovered deep insights to the foundation of mathematical structures.

The question answered by Harrison’s work is known today as “Plateau’s problem”, after Joseph Plateau, a 19th century Belgian physicist who methodically researched the physics of soap bubbles and films. He hypothesized that when you dip a loop of metallic wire into a soapy solution, the surface of the soap film formed on the wire represents the minimum mathematically possible area for the loop, no matter what shape the loop is. This hypothesis, or “theorem” to a mathematician, is deeply related to a question first posed in 1760 by the great French mathematician Louis Lagrange: If a simple closed loop is drawn in 3-dimensional space, is there an area-minimizing surface enclosed by the loop?

Other minimal surfaces are less common, like the Möbius strip and the catenoid. The catenoid shows that minimal surfaces need not be flat. On the contrary, one mathematical definition of a minimal surface requires that the steepest-uphill and steepest-downhill curvatures be equally steep at every point on the surface, making every point look like a mountain pass or a saddle. Minimal surfaces are even found inside your body: the lipid membranes that enclose your cells are most stable if the hydrophobic middle layer of the sheet is kept isolated from the surrounding water, a configuration that is best achieved by minimizing the membrane’s area.

A catenoid is formed when two parallel circular rings are slowly separated after being dipped in a soapy solution, producing a curved minimal surface. Proven to be minimal in 1744 by the great mathematician Leonhard Euler, the catenoid soap bubble adjusts its shape to minimize the area created in three dimensional space.

According to Plateau’s many experiments with soap films and bubbles, their structures must not only be minimal but also mathematically smooth (i.e., having derivatives of all orders) and exhibit the lowest possible energy that can be associated with the enclosed surface. Following his discoveries in the late 1800’s, the study of soap films garnered much attention in the early 20th century, as many brilliant mathematicians strove to find a general mathematical description of their properties. In 1936, Jesse Douglas shared the first Fields Medal (akin to a Nobel Prize of mathematics) for providing a particular class of solutions to Plateau’s problem, but while his special proof was a major step forward, it was not the end of the conquest. Another 75 years would pass before a fresh look and a novel approach would bring the full, general solution.

In early 2011, Jenny Harrison submitted a paper for publication that describes a new approach to Plateau’s problem; one that generalizes all previously studied special cases, including Douglas’s. Her proof applies to all dimensions and surfaces, from garden-variety surfaces like planes to more exotic ones like Möbius strips, a feat that eluded all previous attempts at a solution and represents a truly astonishing leap in mathematical reasoning.

Harrison began her mathematical exploration of Plateau’s problem in 1986 by trying to find new, simpler, and more general analysis methods for the universal treatment of a wide variety of mathematical surfaces such as fractals, smooth manifolds and soap films, as well as physical phenomena like the distribution of electrons on surfaces. In particular, she sought frameworks within which the classical methods of calculus could apply to all of these systems equally. “I spent a good part of the last two decades working in relative isolation on this fascinatingly beautiful problem,” Harrison says. “My goal was to simplify the analytical methods of mathematics and at the same time extend the scope of applications, and isolation was absolutely necessary in order to maintain a state of creative flexibility.”

Harrison’s four-decade-long study of the foundations of geometric properties equipped her with a deepened insight that allowed her to finally take up the formidable challenge of Plateau’s problem when she learned ten years ago that it was still lacking a general solution. (Professor Frederick Almgren of Princeton University had claimed a general solution in 1966 but it was refuted by Professor Frank Morgan of Williams College in 2001)  Driven by the problem’s elegance, she spent the last decade converging on the most general framework within which the problem could be solved.  “As I drew closer to the source, I could make out more of what was drawing me in,” she explains. “The problem had evolved into something more beautiful and more powerful than anything I could ever have hoped to imagine.”

Harrison’s solution, which successfully takes into account all of Joseph Plateau’s foundational experimental observations about soap film surface properties and their unique geometric characteristics, relies fundamentally on a new mathematical framework that she refers to as “Quantum Integration Theory.” Central to this theory are four primitive operators (extrusion, retraction, pre-derivative, and reduction) that act on infinitesimal mathematical objects known as Dirac chains. The operators can be used to move between dimensions, to find relationships between surfaces and their boundaries, and ultimately to prove the existence of a minimal surface enclosed by a boundary —precisely the solution to Plateau’s problem.

The true beauty of Harrison’s solution lies in its generality: because of the efficacy of her Quantum Integration Theory, the proof spans many applications beyond the easily visualized physical systems of soap films and even cellular membranes. Perhaps the most fascinating application introduced in Harrison’s paper is based on a class of novel mathematical operators known as “quantum chain complexes” that could potentially expand our understanding of the mathematical foundations of the physical universe. She was very surprised to find out that the four primitive operators uncovered correspond to the “creation” and “annihilation” operators that are fundamental to quantum field theory, a discovery that could provide new insight to important unsolved questions in quantum physics. “I am not suggesting that we can solve any these problems, and certainly not without more work,” Harrison cautions, “but only that the theory provides new tools which may turn out to be very helpful.”

Professor Harrison’s modesty should not diminish the importance of her discovery. As the history of scientific discovery demonstrates, creativity can emerge from the intersection of deep explorations and ingenious inventions, a trend embodied by Harrison’s inspiring work. More than just providing a proof of Plateau’s problem, the delineation of her new Quantum Integration Theory could open up entirely unexplored territories in mathematical physics and beyond.