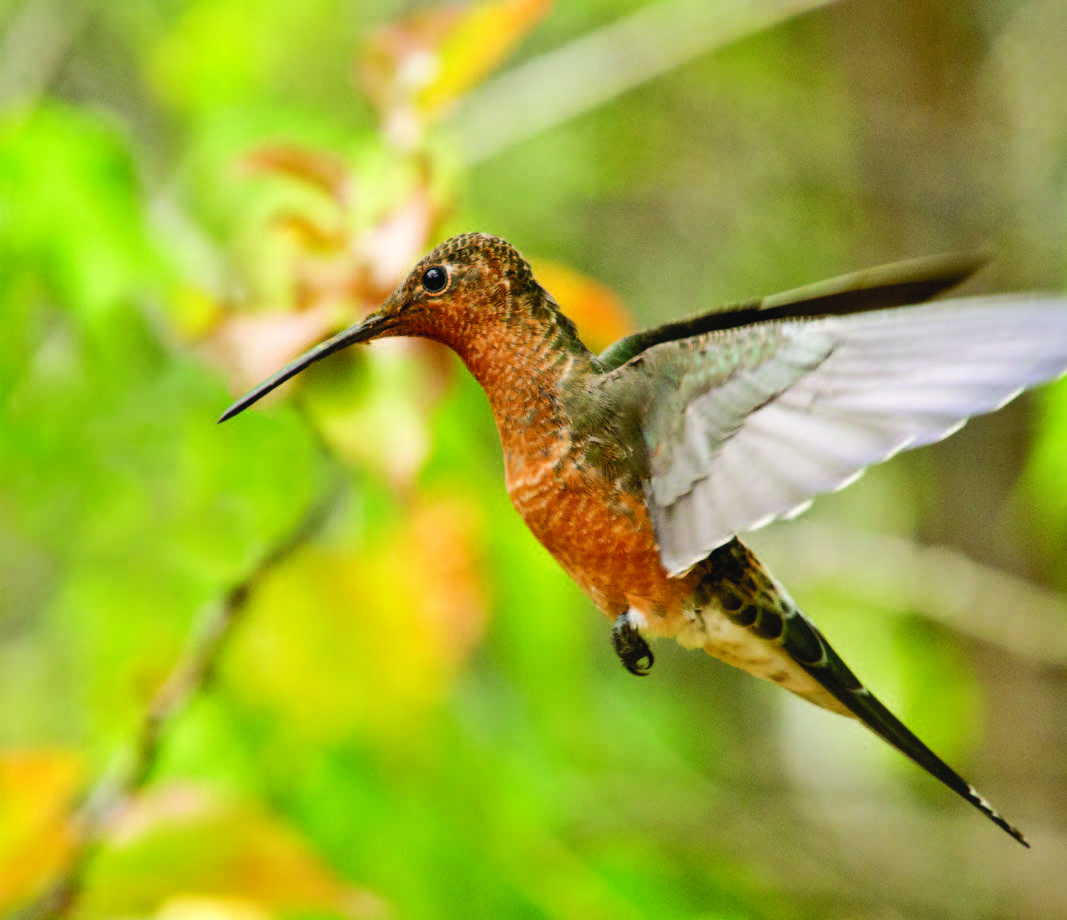 Can that thing fly?

The giant hummingbird, Patagona gigas, native to the Andes, is an oversized cousin of the Anna’s hummingbird beloved in North American backyards. It weighs about 20 grams, as much as a toothbrush, which is twice as much as the next largest of more than 300 hummingbird species. Dr. Robert Dudley and María José Fernández of UC Berkeley’s integrative biology department analyzed the flight mechanics and metabolism of Patagona gigas in search of an explanation for its extreme body size. “Muscle efficiency in general tends to be greater for larger things,” said Dudley, who wondered whether Patagona gigas evolved to take advantage of more effective energy use in the high elevation of the Chilean Altiplano. However, the giant hummingbird’s metabolic rate relative to its size correlates with data Dudley’s group collected for a number of smaller species.  So if the giant hummingbird doesn’t expend more energy to sustain itself in flight, why haven’t hummingbirds evolved to grow even larger? Dudley cites the example of the nectar feeding bat, another vertebrate species that hovers, and can weigh up to 40 grams. “The wing design is very different,” says Dudley. “Bat wings connect to the hind legs, so they’ve got about twice the wing area. Depending on the aerodynamic mechanisms involved, the motor may be irrelevant: it’s your ability to convert that to aerodynamic force.” He speculates that the counterbalance between increasing wingspan and decreasing wingbeat frequency may place an upper limit on body size, which is represented by Patagona gigas. Though the results show that the hummingbird’s characteristically high metabolism is unaffected by size, it’ll be a while on the evolutionary timeline before we see birds as big as falcons hovering at our feeders.

Do you tend to ‘sweat the small stuff’? Chronic anxiety and similar neurological disorders affect over 25 million Americans. Researchers at UC Berkeley have identified two distinct pathways in the brain that can predict an individual’s susceptibility to anxiety. In this collaborative study between the Bishop lab at UC Berkeley and Cambridge University, fMRI images of the brain were taken while subjects viewed a computer-generated image of a person in a room just before a loud scream is heard. For some trials, the virtual figure in the room moves to cover its ears just before the scream, while other trials the gesture does not predict the sound, keeping subjects in a perpetual state of anticipation. Some participants with abnormal fear response displayed a greater reaction to the virtual figure covering its ears – the anticipation of the loud scream created an overactivity in the amygdala region of the brain, while others showed less activation in the ventral prefrontal cortex, a region responsible for decreasing the fear response after generation. These are two entirely separate mechanisms, but failure in either one resulted in a heightened fear response. This new model of anxiety – activation vs. regulation – can better guide targeted therapies for anxiety disorders in the future. By understanding which mechanism is the source of increased fear response in an individual, the success of different treatments can be better predicted.

Spotted hyenas are a curious species. They are one of the very few mammals that maintain a female-dominated society, and one of the only non-primate species that can recognize relationships between animals to which they are unrelated. And, to the surprise of many, there is a clan of 26 hyenas living in the Berkeley hills. Before you start questioning the safety of your evening jogs above campus, know that the hyenas are part of a captive breeding colony housed at the Field Station for the Study of Behavior, Ecology, and Reproduction (FSSBER), maintained by the University of California, Berkeley. UC Berkeley researchers Frederic Theunissen (professor of psychology), Mary Weldele (psychology and integrative biology), Aaron Koralek (graduate student at the Wills Neuroscience Institute), and Stephen Glickman (professor of psychology and integrative biology) decided to use the hyena colony to decipher a distinctive hyena trait – the giggle, and its meaning in hyena society. Hyena social status is maintained by a complicated social network of coalitions and alliances, which requires an intricate system of communication. Hyenas communicate visually, chemically, and, as a major backdrop to the nightly chorus of the African Savannah, acoustically. The quintessential hyena call is the giggle – a high-pitched sound emitted in bouts that sounds like laughter. “The function of the giggle call is actually very poorly understood,” says Aaron Koralek. “This was some of the first work looking at if [the hyena giggle] could potentially serve a social function.” The hyena giggle is most frequently emitted by a subordinate competing over a carcass with a dominant member, and previous observations suggested that the giggle was a subordinate call. Research further suggests that the giggle is a frustrated response to wanting something and not getting it: another good reason not to tease a hyena.

Approximately 1.25 million Americans are chronically infected with Hepatitis B, a blood-borne, sexually transmitted virus that causes severe liver diseases like cancer and cirrhosis. Within this group, over 50% are Asian and Pacific Islanders (API), many of who live in California. However, such high numbers aren’t due to a lack of medical technology. “What is ironic is that a vaccine has been available for over twenty years!” muses Adele Feng, a UC Berkeley undergraduate and the Director of the campus-based Hep B Project, a volunteer organization founded in June 2009 to address the lack of Hepatitis B services in Alameda County, California. Working with other community partners, Feng’s group has been involved in organizing free hepatitis B screenings and vaccinations as well as spreading awareness amongst low-income Asian immigrant communities, one of the most at-risk populations in Alameda County. The county lacks a central database with reliable information about the statuses of local Hepatitis B patients, resulting in an inefficient allocation of resources, outreach, and services. After two years in the community, the Hep B Project realized that they needed to expand beyond their motto of “Educate, Screen, Vaccinate” and start addressing this problem. The organization recently embarked on a project to integrate existing databases of non-sensitive patient data from local organizations and the Alameda County Public Health Department. With this more comprehensive dataset, they hope to create maps of hepatitis B prevalence and at-risk populations in the Bay Area using Geographic Information System (GIS) technology. This effort was a recent winner at the Big Ideas contest conducted by CITRIS (Center for Information Technology Research in the Interest of Society) at UC Berkeley. The group’s proposal included building an easy-to-navigate, user-friendly interface that allows users to look at overlapping demographic factors such as ethnicity, age, and infection distribution on one map. Eventually, public health officials and community organizations should be able to identify and predict areas of greatest need for preventative and disease management services, as well as target at-risk and affected populations in a more efficient and cost-effective manner.