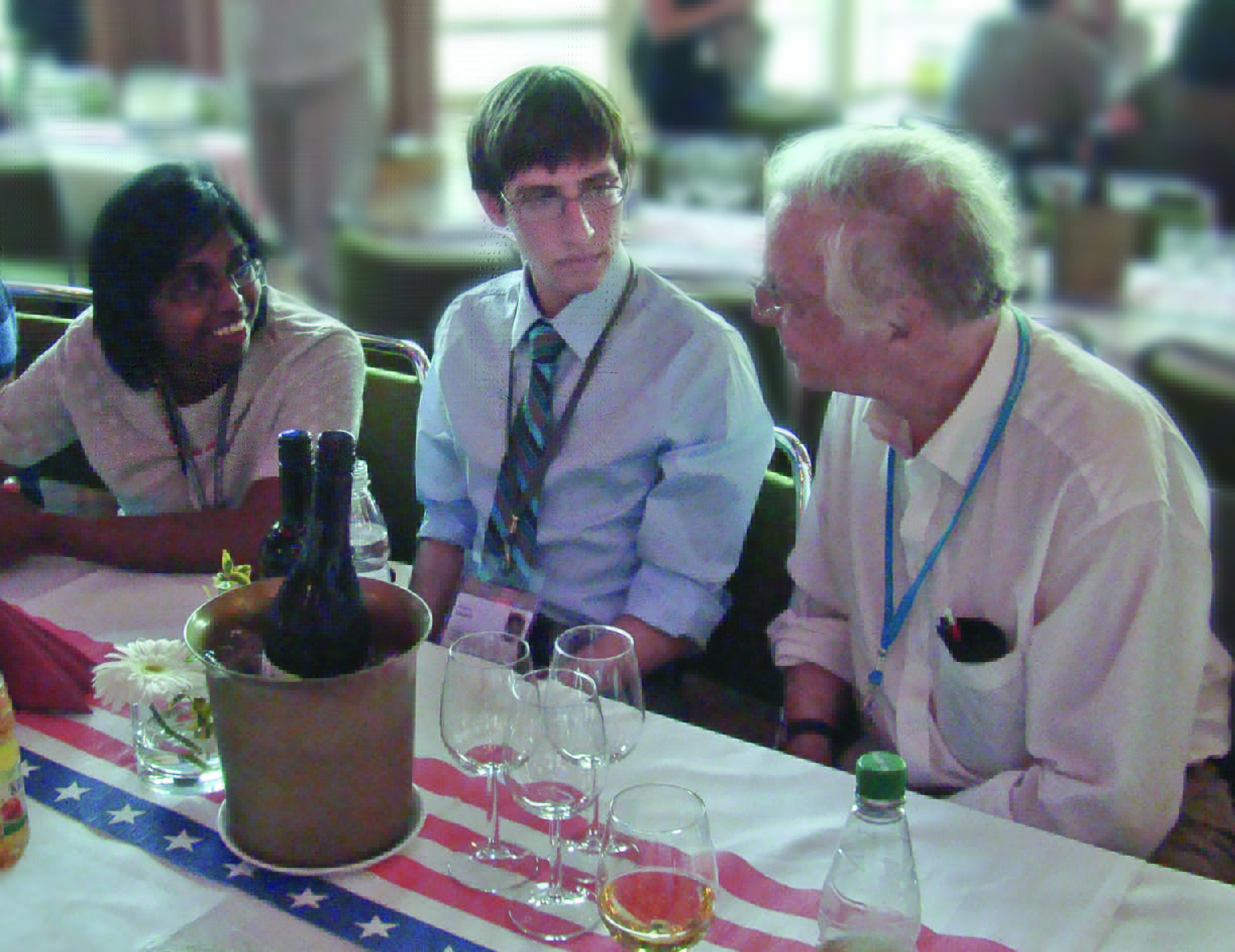 My advisor, molecular and cell biology professor Eva Nogales, burst into the room: “Greg, I need to speak with you right now.” Spurred from my mild Friday afternoon torpor, I felt a momentary panic. Had I done something wrong? However, once we were out in the hallway, instead of harsh words she offered me an opportunity: the chance to apply to the Lindau Meeting, a unique conference where Nobel laureates and young scientists from around the world come together in a small German town for a week of scientific discourse. There was, however, a catch. Berkeley was forwarding the first two applications it received to the reviewing committee for the US delegation, and one had already been submitted. Thus, she was giving me one hour to write an essay and prepare my C.V. so she could submit the materials and a recommendation before leaving for the day. Confident that our frantic last minute efforts would be sub-par, I somehow nevertheless managed to crank it out, then promptly forgot about the whole thing. To my amazement, a few weeks later I was informed that I had made it to the next stage in the selection process. Then the final word came: I was in, one of 567 winners from a pool of 20,000 applicants heading to Lindau.

Only many months later did I come to appreciate the gravity of the event. Instead of a summer prize for lucky graduate students, the meetings began as an effort to reintegrate Germany with the international scientific community after World War II. Two doctors from Lindau, a picturesque medieval town on Lake Constance in southern Germany, persuaded the local government to host an international conference and boost its visibility by specifically inviting Nobel laureates. They also won the backing of a local nobleman, Count Lennart Bernadotte, who quickly became the driving organizational force. The first meeting, held in 1951, was small but successful. It focused on reestablishing ties between expatriate German scientists and those who had remained during the war and included Nobel laureates from both categories. In 1954, young researchers were invited for the first time, beginning a shift in focus towards Nobel laureates mentoring students. An increasing international presence steadily gathered, and today the participants hail from more than 70 countries. Nevertheless, the event maintains strong ties to its origins: Count Bernadotte’s daughter, Countess Bettina Bernadotte, is the reigning president of the Lindau council.

Living up to its varied history, this year’s conference seesawed between prestigious international discourse and a truly local flavor. The proclaimed theme of the conference was global health, and the opening ceremony featured Bill Gates, who engaged in a panel discussion with two young scientists and Nobel laureate Ada Yonath about how best to confront the health challenges of the developing world. In contrast, the Elite Bavarian Network hosted an evening session with local officials who tried to sell the audience on the joys of living and working in the vicinity and, bizarrely enough, lederhosen-clad dancers. Most days featured plenary lectures by several Nobel laureates in the morning, which varied widely from extremely technical science, such as Ei-ichi Negishi’s detailed explanation of the reaction mechanisms of palladium-catalyzed carbon-carbon bond formation, to personal history and anecdotes, such as Oliver Smithies declaration that, “Out of laziness, I invented gel electrophoresis.” Each of the speakers hosted a smaller session to choose from in the afternoon, which were the closest thing to what I had imagined I would experience: a relatively intimate, intergenerational conversation between some of science’s leading lights and those who hoped to follow in their footsteps.

As I navigated the baffling whirlwind of talks, discussion panels, and round-the-clock networking with some of the most intense young scientists I have encountered, it occurred to me that the meetings were, once again, evolving into a new stage. With high-powered VIPs and international delegations, including the requisite government officials, vying for the attention of the laureates, it is clear that the Lindau Meetings have gone big. Of course, that means there are power lunches, invitation only. At one such event, laureate Bert Sakmann told me that when he was a medical student in Germany in the late sixties and early seventies he and his friends used to simply drive over to the meeting every year to hang out and chat with the laureates. Now, big wigs are whisked from event to event in private cars provided by Audi, one of the many corporate sponsors. Journalists and bloggers cover every lecture, and Nature even sends a team to film a documentary. The scope is changing, from strictly promoting dialogue between the “best” scientists and the “best” students, a concept that, while wonderful for the participants, is surely elitist, to displaying that dialogue, and all the hope and excitement that it generates, to a world that is hungry for inspiration.

This shift in character implicitly raises the question, a central thread running through the conference, of what scientists should actually be doing. With their choice of global health as a theme and energetic public relations efforts the organizers are clearly on the side of science for society, i.e. scientists creating and disseminating knowledge for a better world. Sessions were geared towards getting young researchers interested in working on neglected diseases and other problems whose solutions would benefit all of humanity, not just rich, technologically advanced nations. Many of the laureates, however, did not jive with this message, making it clear that they had simply worked on a problem they found personally interesting without thinking about what impacts it might have. In fact, many said that they had made their prize-winning discoveries quite by accident, following up on an unexpected observation. A few laureates, particularly Sir Harold Kroto of bucky-ball fame, advanced a similar argument about technological developments; many follow basic science discoveries made by scientists in seemingly unrelated fields, performing research for its own sake.

Throughout my own scientific journey thus far, I have generally been partial to the trickle-down model of societal benefits from pure science, echoed by many of the laureates. However, my experience at Lindau did get me thinking about working on a problem with a more explicit goal of improving the world while also following my curiosity. And, if I get extraordinarily lucky, earn me a second trip to Lindau.