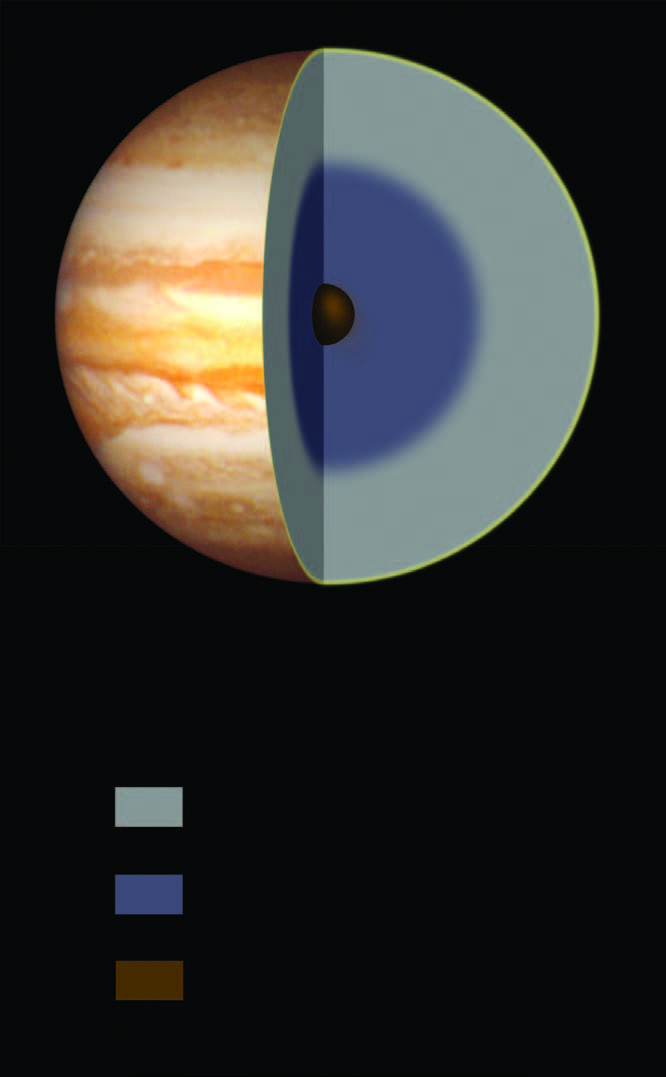 The interior of a planet is an unimaginably inhospitable place. Pressures reach millions of times those on the surface of the earth, and temperatures far exceed any with which we have experience. At these extreme conditions, strange things happen. Rocks flow like fluids, water freezes into exotic kinds of ice-like solids, and hydrogen begins to conduct electricity.

An illustration of the basic structure of Jupiter’s interior. A mantle of liquid hydrogen, in both metallic and molecular forms, surrounds the core. Militzer’s work suggests that the icy outer layer of the core (not shown) is dissolving into the surrounding liquid hydrogen.

Although the interior of the Earth is relatively well understood, the interiors of the gas giants in our solar system–Jupiter and Saturn–are nearly complete enigmas. Unlike Earth, these planets lack a well-defined solid surface. Instead, the atmosphere of a gas giant simply becomes denser and more liquid-like towards the planet’s center until, in effect, it becomes an ocean. Deep beneath this liquid ocean, or mantle, scientists believe that gas giants have cores of rock and ice. Little is known about these obscured cores, and understanding their basic properties—how large these cores are, how they form, or how they interact with the surrounding mantle—remains one of the greatest mysteries of the gas giants.

In a new paper, Burkhard Militzer and his group in Berkeley’s Earth and Planetary Sciences department have provided evidence for a startling new possibility about the core of our solar system’s largest gas giant, Jupiter. Using computer simulations and information about the composition of Jupiter’s interior, they show that Jupiter’s core is likely unstable and is dissolving into the planet’s mantle of liquid hydrogen. Eventually, their results suggest, it may disappear entirely.

While others have proposed the possibility that the cores of Jupiter and other gas giants are unstable, the plausibility of the hypothesis has remained untested because replicating Jupiter’s intense temperatures and pressures here on Earth is extremely difficult. “It’s not obvious whether the core will dissolve,” says Militizer. “We ask the best high-pressure physicists, and they don’t know. The pressures are obscenely high, and there are no experiments that address this question.”

Whether the core is stable or whether it dissolves depends upon a competition between pressure and temperature. On the one hand, the extreme pressures inside Jupiter should generate forces that stabilize the core and combat erosion. On the other hand, the high temperatures in the core tend to favor disordered states in which the core dissolves and mixes with the mantle. “If temperature wins, then it’s like sugar in coffee, and the core erodes,” Militzer explains, referring to the fact that higher temperatures make it easier for solids to dissolve into their liquid surroundings.

Because experiments cannot replicate the conditions within Jupiter, Militzer and a postdoctoral fellow, Hugh Wilson, turned to computer simulations to test the core erosion hypothesis. While Jupiter’s core consists of both rock and ice, the pressures are so great that the ice, which is less dense than the rock, is squeezed from the rock and forms a layer surrounding it, much as the oil and vinegar in salad dressing separates into layers. If Jupiter’s mantle of liquid hydrogen could dissolve this layer of ice, then the icy outer layer of the core would be unstable.

Using techniques from statistical mechanics, Wilson and Militzer wrote simulations to calculate whether the ice would be more thermodynamically stable if it were dissolved in the liquid hydrogen. They found that the dissolved state was more favorable, just as sugar in coffee is more thermodynamically stable dissolved than as solid crystals. This result implies that the interface between the hydrogen and the icy core is unstable and that the mantle of liquid hydrogen is, in effect, melting the ice.

An artist’s conception of Juno in orbit around Jupiter. Launched in August, the satellite will reach Jupiter in 2016 and will make precise measurements of Jupiter’s gravitational field, allowing scientists to calculate the size of Jupiter’s core. These calculations will rigorously test Militzer’s hypothesis that the core of the planet is eroding.

Militzer is particularly excited about this result because a new NASA mission to Jupiter, launched this August, will offer an unprecedented opportunity to directly test his hypothesis. The satellite, called Juno, will reach Jupiter in the year 2016 and will study the planet in greater detail than ever before. Of interest to Militzer are the measurements that Juno will make of the planet’s gravitational field, because they will allow scientists to precisely calculate the size of the core.

“If they find a giant core, then this process will either not exist or be really slow,” says Militzer. But a smaller core—one smaller than predicted by theories of planet formation—would be strong evidence in favor of core erosion. Indeed, a very small core would indicate that even the rock beneath the ice has eroded. Militzer is currently testing that possibility by running simulations to test whether the hydrogen mantle would also dissolve the rock at the center of Jupiter’s core.

For all the exotic forms of matter and complex simulations involved, the effects of the core instability predicted by Militzer’s work are subtle and only observable by the kind of precise gravitational measurements the Juno mission will generate. However, Militzer believes that if core erosion is occurring in Jupiter, then it probably also occurs in many other Jupiter-sized gas giants and, indeed, is likely a fundamental feature of planetary dynamics.