For many, the word “antimatter” elicits images of the Starship Enterprise ripping through space faster than the speed of light, or canisters of tiny glowing balls threatening to obliterate Vatican City. Scientific inaccuracies in popular culture aside, the prospect of isolating antimatter, which annihilates in a burst of light upon contact with matter, has eluded physicists for decades. And yet, this is just what a group of scientists working at CERN, the European Organization for Nuclear Research, recently succeeded in doing. Several months ago, the international ALPHA (Antihydrogen Laser PHysics Apparatus) collaboration, which includes many researchers from UC Berkeley and Lawrence Berkeley National Laboratory, managed to create and, more importantly, capture 38 antihydrogen atoms for about one sixth of a second—an eternity in the world of subatomic particles. This exciting breakthrough will allow physicists to study matter’s counterpart in detail and will ultimately deepen, and possibly fundamentally change, our understanding of the origins of the universe. The first question at hand: why is our universe made almost entirely of matter and not antimatter?

A particle of matter and its antimatter complement have the same mass but opposite charges. While hydrogen is composed of a proton and an electron, an antihydrogen atom consists of an antiproton, the proton’s negatively charged counterpart, and a positron, the positively charged analog of the electron. Though scientists at CERN have been creating antihydrogen atoms from positrons and antiprotons for several years now, they have not been able to contain them for a significant period of time. The net neutral charge makes the anti-atom impossible to confine with an electric field, and its kinetic energy makes it challenging to control with a magnetic field.

Joel Fajans, UC Berkeley physics professor and one of the lead scientists of the ALPHA collaboration, explains the experiment starting with the process of creating antihydrogen atoms: “It’s not actually that hard—you essentially just need to throw together a lot of positrons and low-energy antiprotons, and eventually you get antihydrogen atoms.” Just like UC Berkeley’s own Bevatron, where antiprotons were first discovered in the 1950s, the CERN laboratory creates antiprotons for a variety of scientific experiments. Unlike the Bevatron, CERN is unique in its capability not only to produce these particles, which are byproducts of highenergy particle interactions, but also to slow them down. Once cooled to low energies, the plasma of antiprotons is introduced to a cloud of positrons, letting pairs of particles combine to form bound systems—antihydrogen atoms.

The real difficulty lies in trapping the antihydrogen atom, which Fajans’ group can do with remarkable finesse. The ALPHA trap consists of a complex system of repulsive magnets that takes advantage of antihydrogen’s magnetic moment to suspend the atom in space. However, despite state-of-the-art technology, this is a very weak magnetic trap. Even the smallest residual energy above a certain threshold allows the atom to escape. Fajans likens the magnetic trap to a “tiny little dimple on a sheet of paper” and the antihydrogen atom to a “ball rolling around inside the dimple. Because the dimple is very shallow, the ball will only stick in it if it’s rolling very, very slowly.” Despite the challenges, the team was able to coax many atoms of antihydrogen to stay put in that “dimple.”

As of last November’s publication in Nature, the ALPHA team had managed to isolate 38 particles of antihydrogen for just enough time to be sure of the new anti-atoms’ identities. They subsequently turned off the trap to release the antihydrogen and observe the resulting annihilation event. Since then, the number of trapped antihydrogen atoms has increased significantly, as has the time spent in the trap—up to about 30 minutes! More time in the trap means more time to study the properties of the antihydrogen atom.

Ultimately, the success of the antihydrogen-trapping experiment could play a crucial role in filling a gap in the fields of particle physics and cosmology. Currently preferred theories state that equal amounts of matter and antimatter should have been created in the conditions that were present in the infancy of our universe. However, the amount of matter overwhelmingly outweighs the amount of antimatter we observe in our universe. “Conceivably, there could be a galaxy out there made entirely of antimatter,” says theoretical cosmologist Chung-Pei Ma, professor of astronomy at UC Berkeley. However, signs supporting the existence of such an “anti-galaxy” have never been observed.

Experimental study of antihydrogen might take us a step towards understanding what happened to all the antimatter during the birth of our universe. Do antihydrogen atoms interact with gravity differently than hydrogen atoms? Do they have different atomic signatures? “If not, this is just a ‘gee-whiz’ experiment,” Fajans remarks. However, if there is indeed a difference in the properties and behavior of matter and antimatter, both Ma and Fajans agree that this would have revolutionary implications for how physicists think about the beginnings of our universe. The general consensus among scientists is that finding these differences seems highly unlikely, though the mere possibility of such a profound discovery is very exciting. We may never be able to power spaceships with antimatter, but the search for answers to the mysteries of the universe will never run out of fuel. 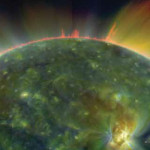