How does DNA encode for everything that makes us “us”? In short, DNA contains the instructions our cells need to make proteins, and proteins run the biological processes required for life: from metabolizing food to transporting oxygen in our blood to fighting infection. They also dictate our most defining characteristics, such as eye, skin, and hair color.

How genetic information is transferred from DNA to protein is summed up in the so-called central dogma of molecular biology, a model first proposed by Francis Crick in 1958. In its simplest (and crudest) form, the central dogma states “DNA makes RNA makes protein.” This describes the basis of gene expression.

The building blocks of DNA (nucleotides) contain bases that come in four different flavors: A, T, G or C. Nucleotides form long strands that wrap around and bind to another complementary strand in a double helix structure, where each base is specifically paired: A–T and C–G. The first step of gene expression involves unwrapping a segment of DNA—a gene—to expose the sequence of bases. This sequence is then copied into a short strand of messenger RNA (mRNA). Next, the mRNA is read and translated into a chain of amino acids, the building blocks of proteins, during a process aptly named translation. Every three mRNA bases encode for a single amino acid, in a map referred to as the “genetic code.” The amino acid chain then folds around itself to produce a protein with a specific three-dimensional structure and a unique function.

One important consequence of understanding the central dogma was the emergence of genetic engineering. Researchers discovered that they could manipulate DNA to alter gene expression, and hence alter the physical characteristics of an organism. Genetic engineering has revolutionized biomedical research, allowing investigators to probe the function of a single gene or protein as well as study and find cures for diseases. It also has widespread application in the food industry, but not without significant hurdles and controversy (see “GM to Order“, Spring 2014).

The principle behind genetic engineering is to insert new genetic material into a host organism, providing it with instructions such as whether or not to make a given protein. This is done by first stringing together genes and other DNA fragments into a small DNA molecule called a plasmid (or vector). The fragments are the words and together in the plasmid, they form a sentence. The plasmid is then introduced into a host cell using an appropriate delivery system. One common method is to use a virus as a carrier, which has evolved to naturally infect cells with DNA. Once present in a cell, the plasmid inserts itself into the host’s DNA and the cellular machinery reads it out as if it has always been there.

Unfortunately this process has significant limitations. There is no way to guarantee that the host genome will integrate the plasmid, and if it does, unpredictable side effects that are unrelated to the plasmid genes themselves are common. Luckily, these limitations are fading fast with the advent of more sophisticated “genome editing” techniques, which produce more reliable and precise modifications. Particularly exciting is the CRISPR technique, recently pioneered at UC Berkeley in Jennifer Doudna’s lab. CRISPR uses an enzyme called a nuclease, which can be thought of as DNA scissors that cut both strands of DNA at a precise location. The scissors (a protein called Cas9) are escorted to the cutting site by a guide RNA (gRNA). GRNA looks for its complementary sequence in the cell’s DNA and anchors to it while Cas9 does the cutting. Since our cells’ DNA repair mechanisms are poor at repairing double-stranded breaks, the upshot is a targeted mutation and disrupted protein synthesis at that location. Going one step further, this technology can also be used to insert new DNA at the break; new DNA is introduced into the cell via a plasmid and is then incorporated into the host genome using cellular machinery that harnesses the new DNA as a template to repair the double-stranded break.

CRISPR is not the first nuclease technology; others exist that use proteins instead of RNA as their nuclease usher. This difference gives CRISPR the advantage. RNA is faster and easier to program, more efficient at finding the cutting site, and importantly, offers the potential to target almost any cutting site using a simple complementary sequence of bases. CRISPR provides researchers with an unprecedented handle on DNA manipulation and carries with it significant implications. Among those are safer gene therapy, advanced biofuels, and never-before achievable genetically modified organisms for biomedical research and agriculture. Perhaps one day a modified dogma will arise: “Human makes DNA makes RNA makes protein.” 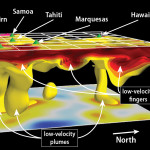 Hotspots and fingers and plumes, oh my! Previous
The first rule of data science Next 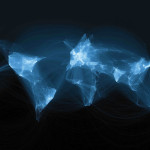