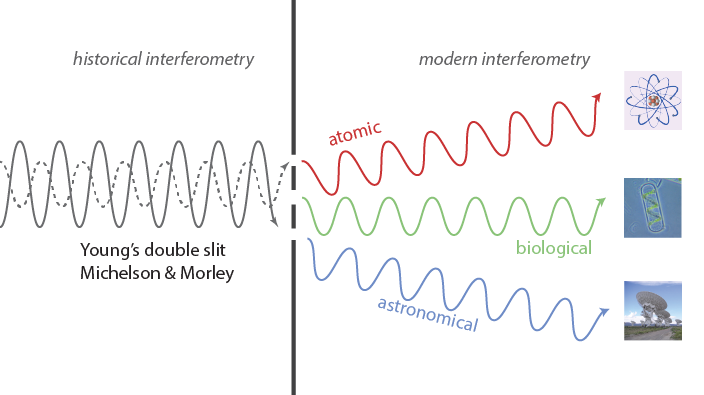 From the side of the road, police officers cannot peer at the speedometers of cars passing by. Unfortunately for speedy drivers, all the information needed to enforce speed limits can be attained indirectly. This is because radar guns used by officers emit radio waves that are reflected back from moving cars. An accurate measurement of speed can be calculated from these data because well-established physics describes how the frequency of the reflected wave depends on the speed of the object (this phenomenon is known as the Doppler effect and explains why sounds emitted from moving objects, like a police siren, are observed to change in pitch).

Assistant Professor Holger Müller of the physics department also exploits the physical properties of waves, albeit different ones, in order to measure speeds in the tiny world of atomic physics. His research group is interested in testing and refining modern theories of gravity and quantum mechanics, and in pioneering new experimental techniques to do so. Like our law enforcers, these researchers cannot glance at the speedometers of, say, cesium atoms. Instead, they expand the limits of precision measurement using a family of techniques known as atom interferometry.

Atom interferometry relies on the fact that all particles fundamentally display properties of waves as well. This concept is a cornerstone of quantum mechanics and has vexed physics students and experienced researchers alike since the field’s development in the early 20th century. When waves interact, or “interfere,” they combine to form a new wave. The new wave carries all information about the constituent waves as well as additional, measureable information about how the waves interacted with each other. This “principle of superposition” is the basis of all interferometry techniques. As first shown by Louis-Victor de Broglie in 1924, heavier particles have shorter wavelengths. Since wavelength determines the precision of these instruments, interferometers that use atoms instead of photons have become a standard tool for accurate measurement at extremely small length scales.

In a typical atom interferometer, a wave source will emit atom (e.g., cesium) waves into the path of a photon. This interaction causes the single matter wave to split into two waves, each with a distinct wavelength dependent on physical laws, along two separate paths. These paths later recombine to form an interference pattern that can be precisely measured. From the laws of physics, the matter-photon interaction and splitting probabilities can be used together with these interference pattern data to reveal the nature of atomic physics. For example, the Müller laboratory has used setups such as this to observe the oscillation frequency of a cesium atom, a feat that recently produced one of the most fundamental definitions of the unit of mass (see “A Time to Kilo”).

Although modern atom interferometry techniques were pioneered about 20 years ago, various methods of interferometry have been essential for the advancement of fundamental physics for over two centuries. For example, Thomas Young’s “two slit” experiment of 1803 provided the first conclusive evidence for the wave theory of light by splitting light waves and observing their subsequent interference pattern. In another historic experiment, Albert Michelson and Edward Morley set out in 1887 to study properties of the “luminiferous aether,” the medium thought by contemporary scientists to carry such light waves. Their experimental results failed to support the hypothesis. Their result, however, became famous two decades later for providing the earliest evidence for Einstein’s theory of special relativity.

Techniques based on interferometry apply beyond the domain of fundamental physics research as well. In particular, clever instruments that produce and interpret the interference patterns of light waves drive our ability to image things at extreme length scales. Astronomical interferometers, for example, consist of arrays of telescopes or mirrors that collect and combine photons from space to create high-resolution images of celestial objects like stars. Interferometry is also essential for several modern biological and medical imaging techniques. This is because the interference patterns of photons with living matter contain information about structures unobservable with conventional light microscopy. Still other types of interferometers are used in telecommunications, navigation systems, and surface topography.

From Young’s double slit experiment through Albert Einstein’s conceptual development of the photon, we have long appreciated that our world is illuminated by waves. It is therefore fitting that cleverly acquired interference patterns of waves, made of either matter or light, allow us to see more than ever before. Today, interferometry researchers are actively developing techniques to study more massive molecules in order to help us understand the still-challenging relationship between matter and waves. This poses both technological and theoretical challenges for acquiring and interpreting data from such complex systems, but researchers are optimistic. Perhaps such extreme measurements will yield the type of inspirational results interferometry has given before, and of which many physicists dream—results to describe unexplained phenomena.

Tuned in Previous
A Mobile Medical Lab Next