There’s a Fly in My Water 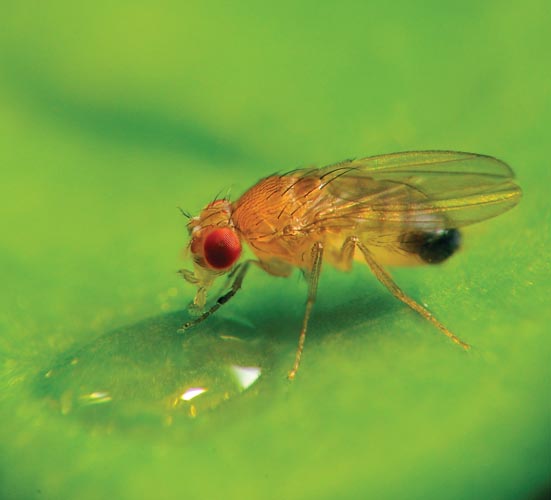 Imagine yourself at a barbecue on a hot summer weekend. You’re grilling burgers and hot dogs, eating potato salad, and indulging in a slice of watermelon. Let’s say that you’ve chosen the sweetest slice of watermelon and you think to yourself, “What makes this watermelon taste so delicious?” The answer, in part, is that the sugars in the watermelon are stimulating the taste buds on your tongue and those sensations are being relayed to the brain via neurons, where the sweet taste is processed and identified as a source of energy. As far as we know, humans have taste buds for five categories of compounds, or modalities of taste: sweet, salty, bitter, sour, and umami, or savory. It’s the discrete combination of these taste modalities, along with the smells and textures of foods, that actually produces flavor. But suppose there are more elements to our palate? Recent research at UC Berkeley confirms that we are still identifying new taste receptors that behave in unique ways compared to conventional ones. Researchers have found a gene in fruit flies responsible for tasting water, a modality that has not yet been identified in any other organism. Adding to the intrigue, this taste modality functions in a novel manner: rather than sensing individual molecules or ions as a sweet or salty taste receptor does, it instead senses the purity — or osmolarity — of water. In the example of our hypothetical summer barbecue, imagine a particularly thirsty fruit fly buzzing by and alighting on your sweet watermelon slice. It would taste both the sugars and juice and the high osmolarity of the water, and might decide to move on to a more watery meal to slake its thirst.

In a recent Nature paper, Kristin Scott, Associate Professor of Genetics, Genomics and Development and an affiliate of the Neurobiology Department, and her colleagues at UC Berkeley show evidence of a previously undiscovered taste receptor in Drosophila melanogaster, the common fruit fly. Scott and her colleagues are studying how taste works in flies and have shown that the way a fly tastes food is slightly different from the way people do. “In Drosophila, there are taste bristles located on the legs, the wings, the proboscis and the internal mouth parts,” explains Dr. Peter Cameron, the lead author on the paper and a recent graduate student in Scott’s lab. “Each taste bristle contains two to four taste neurons.” These neurons have receptors that come in contact with food on one end and, on the other, axons that extend to the fly brain to deliver taste information. Each individual neuron has one kind of taste receptor, meaning that each taste neuron is specific to one taste. As Cameron says, “In Drosophila you have, for the most part, a class of neurons that respond specifically to sweet compounds, a class of neurons that respond to bitter compounds, and a class of neurons that respond to water. There’s even a class of neurons that respond to CO2.”

For years, scientists have suspected that flies are able to taste water, distinguishing aqueous solutions from others. What Scott and her colleagues discovered was that flies are really using a single protein to determine the purity, or osmolarity, of water. The lower the osmolarity of the solution, the fewer the compounds and salts dissolved in it and the purer the water. Scott explains, “What was known were the results of electrophysiol- ogy experiments that monitor cell activity, and [we] could see that taste cells in the fly responded to water.” Despite the evidence, no one had been able to identify the protein responsible for the taste. The difficulty lay in the fact that the osmolarity sensor is relatively rare. The sweet and bitter receptor proteins, for example, had been relatively easy to uncover because they belonged to a large family of receptors, whereas the water sensor belonged to a “lingering modality probably composed of a single receptor,” according to Scott. This needle-in-a-haystack search was rendered tractable by the use of recently-developed genetic tools. “There used to be very few ways to get at molecules expressed in only a few cells… but now, with the Drosophila genome sequenced, and with very sophisticated new molecular approaches, it’s no longer as challenging as it once was,” Scott explains.

In order to pin down the osmolarity sensor protein, Cameron used DNA micro- arrays, diagnostic tools that compare the relative expression levels of all genes in a single cell. By comparing gene expression in the proboscis between a mutant fly that no longer had taste receptors and a normal (wild-type) fly, Cameron could sift through the genes and see which ones turned on due to the presence of a functioning taste receptor. Disregarding genes for known taste receptors, he focused on genes for receptors resembling ion channels, which, as the name suggests, are channels that control salts flowing in and out of the neuron. According to Scott, “ion channels had been implicated in salty and sour mammalian tastes, and because we didn’t have any counterparts for salty and sour tastes in the fly, we thought looking at ion channels might be a good idea.” Cameron focused on a gene that encoded a protein in the cell membrane named Pick-Pocket 28—or PPK28—because it was present in cells where all other known taste receptors were absent, a good indication that PPK28 is responsible for a unique taste modality. As it turned out, Cameron’s hunch was correct: PPK28 is responsible for osmosensation, a rare find, indeed.

The researchers next applied advanced molecular techniques to image the neural activity of individual flies. Using a cloning and imaging technique known as GCaMP imaging, they were able to make neurons that normally produce the protein PPK28 also produce a special fluorescent protein that responds to the influx of calcium into the cell, which is an indicator of neuronal activity. The term GCaMP refers to an engineered variant of green fluorescent protein (GFP) that is fused to the calcium sensitive protein calmodulin (CaM), producing a protein that is only fluorescent in the presence of calcium. By immobilizing a fly and peeling off the cuticle above its brain, Cameron was able to see a green glow when the PPK28-positive neurons were stimulated. In the case of these neurons, the amount of fluorescence corresponded with how pure the solution was—the purer the water, the greater the activity. Scott explains, “With almost any solution, the cells responded, but the response decreased with increasing ion concentration. So that gave us one of our first clues that this might really be an osmosensitive ion channel that responds to low osmolarity.” That is to say, the protein is not so much a receptor, in the classical sense, but a sensor of water quality.

To test this hypothesis, Cameron generated mutant flies lacking the ppk28 gene, and they behaved roughly like normal flies, except that they would drink much less water. Cameron was also able to reverse this defect in the mutant flies by having cells specifically express PPK28 again, causing the flies to behave normally. Electrophysiological experiments confirmed that PPK28-positive neurons respond specifically to low osmotic (highly pure) solutions.

Taste receptor PPK28 is labeled with GFP (green) in this image of a fly brain. Following the trhead-like axons visible in such images helps researches determine the receptor’s neuronal interactions. Here, green labeling shows up in the taste-sensitive region of the brain, the subesophageal ganglion. Credit: Peter Cameron

The next step for the researchers is to characterize the mechanism by which PPK28 works. Scott already has a model in mind. Taste receptor PPK28 is labeled with GFP (green) in this image of a fly brain. Following the thread-like axons visible in such images helps researchers determine the receptor’s neuronal interactions. Here, green labeling shows up “We think [PPK28] may be just detecting membrane swelling: a hypoosmotic [purer] solution causes the cell membrane to expand, and the ion channel senses the expansion of the membrane, which causes a pore to open.” Scott also speculates that this discovery may lead to uncovering other osmosensitive pro- teins that might be important in maintaining cell homeostasis, not just in flies, but perhaps in mammals, too. “If we understand how PPK28 is opened and gated I think it will be important for studying osmosensation in other animals as well.” How organisms regulate water intake and distribution is incredibly important, and by studying PPK28 in fruit flies, we may learn more about the as-yet-unknown osmosensors that mammals and humans must possess. Do these osmosensors help us recognize water through a taste modality? As Scott puts it, “Maintaining water homeostasis is essential for all animals. PPK28 helps fruit flies do that, and I think that the modality is going to be more broadly conserved.” For now, the question remains: a fly can tell the difference between ultra-purified bottled water and water straight from the tap, but can you? 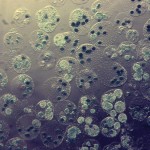 Beyond Watson and Crick Previous
Can You Second My Emotion? Next