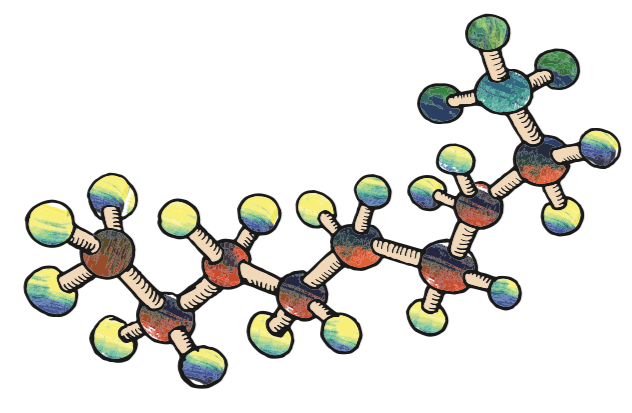 The crack of an egg. The sizzle of a pan. The bright yellow bulge of an egg yolk. These sights, smells, and sounds let you know breakfast is coming, and once the cooking is done, nothing is more satisfying than sliding your eggs effortlessly onto your plate, yolk intact. Research shows, however, that the price of your no-fuss, non-stick pan may be higher than you thought, and the same is true for your waterproof jackets, stain-resistant carpets, and water-resistant cosmetics.

The non-stick, waterproof, and stain-resistant powers of these products stem from the highly fluorinated carbon chains, known as poly- and perfluoro-alkyl substances (PFASs), with which they are made. The magic lies in the astonishingly strong carbon-fluorine bonds that render PFASs resistant to degradation while repelling substances like oil and water. Although this prevents your take-out pizza box from getting soaked in grease, it also means that the PFASs in the cardboard’s waxy lining will outlive you, your children, and possibly all of mankind.

“These materials persist for geologic time,” says Dr. Arlene Blum, the founder and executive director of the Green Science Policy Institute in Berkeley and a visiting scholar at UC Berkeley. What concerns Blum is that, from production to disposal, PFASs initially bound to a product are released into the environment, making their way into our food, our drinking water, and ultimately into us, at increasingly higher concentrations over time. In 2001, researchers from Michigan State University measured levels of perfluorooctane sulfonic acid (PFOS), a commonly used PFAS, in wildlife around the globe, and detected these man-made chemicals in every animal studied, from bald eagles in the United States to seals in the remote Arctic.

Animal studies have shown that, once in the body, PFOS and its cousin perfluorooctanoic acid (PFOA) can have harmful effects on the liver, immune, and endocrine systems and can lead to cancer. Gathering direct evidence of the effects of PFOS and PFOA on humans at environmentally relevant exposure levels, however, is more challenging. Researchers cannot subject human research participants to a potentially toxic chemical; instead, they conduct epidemiology studies that gather and analyze data from a large number of people with different backgrounds and lifestyles, making it time-consuming, costly, and challenging to weed through all the variables. To overcome these difficulties, scientists often choose research participants who live or work in an area with high exposure to chemicals. For example, researchers from Emory University studied residents living near a West Virginia DuPont chemical plant that had been releasing PFOA into the Ohio River since the 1950s. By analyzing PFOA blood levels, estimating past exposure, and conducting surveys on cancer incidence, researchers concluded in a study published in 2013 that PFOA exposure was associated with kidney and testicular cancers. Similar epidemiology studies have shown that PFOS or PFOA are also linked to liver malfunction, high cholesterol, low birth weight, and more.

Still, the level of scientific uncertainty makes it difficult to pinpoint a precise cause-and-effect relationship. “This is where you cross from strict science, which provides data about all of these things, into the ethical dimensions of it,” says Dr. Marty Mulvihill, the executive director for the Berkeley Center for Green Chemistry. “What level of certainty do we need as a society to take action on chemicals of concern?”

As the mountain of evidence against PFOS and PFOA grew, the Environmental Protection Agency began working with major PFAS producers to voluntarily phase out their use, with plans to end all use this year. This seemingly good news is tainted by what Blum refers to as “toxic whack-a-mole”: once a chemical is found to be unsafe, companies make the switch to another that is similar in chemical structure but untested. Recent examples of “whack-a-mole” include the switch from bisphenol A (BPA) to bisphenol S (BPS), which new research has shown may be just as harmful. This may be happening again as long-chain PFASs such as PFOS and PFOA, composed of eight carbon atoms (C8), are being replaced by short-chain PFASs containing the same carbon-fluorine bonds but with only six carbon atoms (C6) or fewer.

The issue stems back to 1976, when the United States passed the Toxic Substances Control Act (TSCA), which to this day still regulates chemicals. “The basic, underlying assumption to TSCA is: assume everything is safe, keep track of what’s out there, and then put the burden on the government to say that if something goes wrong—if a bunch of people get sick—then we’ll take action,” says Mulvihill. This means chemicals such as short-chain PFASs are innocent until proven guilty.

The FluoroCouncil, which represents many fluorotechnology companies, says the switch from C8 to C6 is safe. “The short-chain PFAS substances studied to date are not expected to harm human health or the environment,” writes Jessica Bowman, a representative of the FluoroCouncil, in a communication published this year. “They are eliminated more rapidly from the body and are less toxic than long-chain substances.” Bowman continues by saying that PFASs are unrivaled in their functionality and durability, which we take for granted in our daily lives and in more specialized applications, and that the environmental persistence of C6 is not reason enough to stop using them.

Blum fears, however, that persistence is an issue and that although the half-life of C6 in the body has been shown to be shorter than that of C8, their similar structure makes them just as dangerous. Researchers at Stockholm University share this concern after their computer simulations showed that short-chain alternatives are likely to be just as toxic and widespread in the environment as PFOS and PFOA. Blum, however, does not want to sit and wait for experimentalists to gather enough information on C6 for companies to begin taking action. “It took a lot of time to get data on C8,” says Blum. “We need to find safer alternatives now.”

Under TSCA, both Blum and the EPA believe that regulating PFASs through legislation is not a feasible option. “[The] bar to take action is so high that the EPA doesn’t feel like they have the power to outright regulate chemicals that are on the market,” says Mulvihill. “In the 90s, when the EPA failed to get asbestos over that bar, they basically gave up, and haven’t tried to regulate any new chemicals since then.” Instead, the EPA has taken an approach where they gather and publicize information about potentially toxic chemicals and try to collaborate with companies, such as those in the FluoroCouncil, to change their products’ chemistry.

Blum’s approach is to educate major retailers, manufacturers, and purchasers about the potential toxicity of C6 and convince them to remove PFASs from their products. This strategy has worked in the past: after Target representatives heard a lecture at www.sixclasses.org (The Green Science Policy Institute’s webinar series on the six classes of chemicals of concern) on antimicrobials like triclosan, which are believed to be endocrine disruptors and are used regularly in products such as toothpaste and shampoo, the company decided to remove them from their house brand. “The government is really slow. Target can make changes overnight,” said Blum. Educating consumers is also important, since they can use their purchasing power to sway major manufacturers.

Blum believes that a 50 percent reduction in PFAS use could easily be realized in five years by switching to available alternatives and restricting their use to when they are truly essential. “If you’re climbing Mt. Everest, that may be a situation when the best waterproof material is necessary,” says Blum. “But people need to decide if such environmentally persistent chemicals are really needed when they’re walking around Berkeley.” 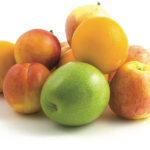