Scaling the tree of life

When animal evolution is first introduced to students, the basic concept seems straightforward. Populations grow and thrive within their environmental niche until an external pressure forces the population to change. The individuals that become best suited to the new environment obtain a selective advantage, and, over time, the overall population shifts to reflect this change in fitness. These changes can be morphological, like a change in tail length or fur color. Some changes, however, are more subtle and manifest as small genetic changes—even a single DNA nucleotide change can have large consequences on survival. Evolution is also complicated by the fact that animal habitats are incredibly multifaceted. They are constantly in flux and contain seemingly infinite factors that could pressure animal populations, like food availability, weather, and predators. Now, with climate change introducing unprecedented pressures on animal populations, understanding how they adapt is more critical than ever.

Professor Ian Wang’s lab at UC Berkeley explores how environmental pressures drive the evolution of animal traits. The lab focuses on various species of reptiles and amphibians, including newts, lizards, and dart frogs. Researchers combine morphological data collected from these organisms with data about their geography and environment, focusing on factors like temperature, climate, and terrain. They then apply various statistical models to determine which traits are correlated with certain environmental factors.

The power of this statistical analysis is demonstrated in recent research on the evolution of anoles, a type of lizard found throughout the Americas. Michael Yuan, a graduate student in the Wang lab, investigated whether the habitat of different anoles in the Caribbean drove changes in their claw and toepad shapes. Yuan sampled 428 different anole specimens, collecting data on their claw length, claw height, claw curvature, body size, and total height. He also compiled data on the anoles’ habitats—whether they were found on the ground or in trees, and how high up in the tree the anoles resided. Yuan discovered that the claws of anoles found in trees were significantly more curved than the claws of those found on the ground. The exact features of the anoles’ habitat were also important: the height of the claw increased with the diameter of the branch where the lizard was found. These relationships suggest the claw size and shape have evolved based on the lizards’ need to adapt to the environment around them.

What is the advantage of having curved claws? Lab tests show that the more curved a lizard’s claw is, the stronger the force required to remove them from glass surfaces. For an animal that survives by clinging to trees, grip strength can mean the difference between life and death. After a series of hurricanes hit the Caribbean in 2017, the surviving lizard population had a skewed toe and claw morphology that allowed for stronger clinging strength during the intense winds. As tropical waters warm, hurricanes are expected to become more frequent and intense, meaning the ability of anoles to adapt their claw shape may be the key to their long term survival.

Going forward, the Wang lab is interested in how lizards will adjust to another climate change threat: increasing temperatures. Like most reptiles, lizards are ectotherms (or cold-blooded), and their internal temperature depends on the environment. Lizards have evolved many tricks to help regulate their temperature, like changing the size of their scales or altering the hours when they are active. Matt McElroy, a postdoc in the lab, is hoping to use geographic and climate data to better understand the evolution of these traits. Using genetic data from lizards gathered in the field, combined with historical geographic data, McElroy hopes to understand how changes to the environmental in the past may have caused genetic changes. These large amounts of genetic data will teach us about the evolution of previously identified traits and potentially identify new genes that evolve in response to temperature changes. As with clinging strength, the ability of lizards to evolve methods of regulating their temperature will be imperative for their survival. An increase in average temperature of even a fraction of a degree may have an impact on the lizard populations’ fitness. Understanding evolution helps us understand the past, but it also helps us look into the future. As animals face catastrophic changes, understanding how they have adapted may influence how we respond and intervene. In the face of mass extinction, evolution research may give some species a fighting chance.

Derek Bangs is a graduate student in infectious diseases & immunity 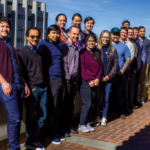 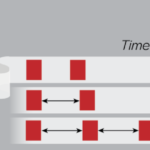