The future is H2

The last three fire seasons have been the deadliest and most devasting California has seen. As climate change is a primary culprit to these devastations, mitigation strategies need to be scaled-up and implemented. Energy resiliency—the assurance that electricity will be deployed at any given moment to satisfy the needs of customers—is essential in today’s world. But clean energy, which is critical for reducing greenhouse gases and slowing climate change, typically sacrifices resiliency. Common clean energy sources like solar and wind cannot provide round-the-clock power like traditional energy sources including natural gas, oil, and coal. At large refineries, natural gas is burned and through the breakage of bonds, heat and carbon dioxide are released. While intermittency can be mitigated by storing excess energy in batteries, batteries alone are not enough to solve our energy problems. Hydrogen may be a solution.

Made up of the most abundant atoms in the world, hydrogen gas, or H2, contains a lot of energy in the form of chemical bonds. To convert the chemical energy into electricity, the hydrogen gas must be fed into a fuel cell, where it is split into protons and electrons at an electrode. The protons move through the fuel cell (via an electrolyte) and the electrons move externally through a wire, generating the electricity. The electrons and protons recombine at the opposite electrode, completing the chemical reaction. This chemical process happens spontaneously and can generate power on the mega- to giga-watt scale. The only byproducts are heat and water!

But there is a catch. Fuel cells mostly use hydrogen that is produced by burning methane, a process that releases a large amount of carbon dioxide. To harness this promising technology for clean energy storage, we can produce hydrogen cleanly using an electrolyzer. An electrolyzer is a fuel cell run backward, using electricity to split water into hydrogen and oxygen. 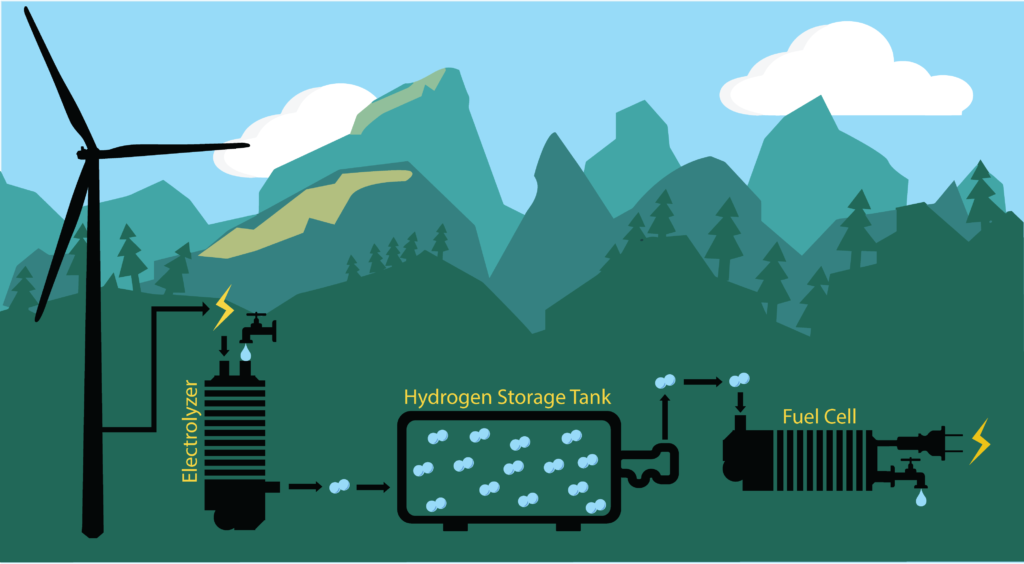 Long-term energy storage can be achieved using an electrolyzer to convert water and electricity to hydrogen gas. When electricity is needed, a fuel cell converts the hydrogen gas back into electricity. Design: Natalie Goh

This clean hydrogen can be made during peak production hours when excess energy is generated. Think of a sunny summer day when many people are enjoying their day outside and not using excess energy. By siphoning off some energy during these peak production times, hydrogen gas can be made and stored in tanks. According to Zachary Taie, a Ph.D. candidate at Oregon State University, “two huge incentives for using hydrogen is the energy storage (the tank) is decoupled from the energy conversion (the electrolyzer and fuel cell) and the storage of hydrogen is stable over long time scales, weeks, months, years, which cannot be said for current energy storage technologies just yet.”

The Department of Energy is funding multi-million-dollar projects, like the H2@scale program, to accelerate progress in renewable hydrogen energy technology. The main challenge is decreasing the cost of the systems to scale-up operations. But hydrogen fueling stations are already being approved and the technology development is on its way to meet the demands of the market. Hydrogen fuel cells are replacing the combustion engines in vehicles such as the AC transit buses around the East Bay and heavy-duty trucks, like the ones Nikola Motors is deploying. Fuel cells are also being used as stationary power systems to replace diesel generators, such as Bloom Energy in the South Bay.

Clean and storable, hydrogen may be our best shot at weaning ourselves off of fossil fuels. As Staff Scientist at Lawrence Berkeley National Laboratory, Dr. Nemanja Danilovic puts it, “It is hard to put a value on energy resiliency; renewable energy plus short-term and long-term storage can provide undisrupted energy for hospitals, homes, and towns in the future.” Hydrogen is one clean solution for long-term storage. From the perspective of Grace Anderson, a chemical engineering Ph.D. student at UC Berkeley, “The effects of climate change are becoming more apparent, especially here in California. The need to reduce carbon dioxide emissions is great, and I believe hydrogen has a large role to play in eliminating reliance on fossil fuels.” It alone is not the silver bullet for addressing climate change but coupled with batteries, solar, wind, and other renewables, our dependence on non-renewables can be weakened and a cleaner energy landscape can be achieved.

Julie Fornaciari is a graduate student in chemical engineering. 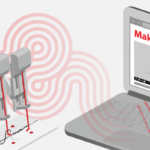 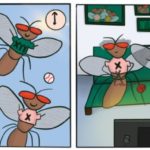