Like a desert wanderer, UC Berkeley astronomer Geoff Marcy seeks water, but his search is not on this planet. Using the powerful Keck Telescope atop a dormant Hawaiian volcano, Marcy searches for new planets by detecting small, cyclical shifts in the wavelengths of starlight. These “Doppler shifts” are caused by compression and expansion of light waves that stream from stars as they wobble, drawn ever so slightly toward an orbiting planet. Recently, Marcy discovered a planet the size of Neptune — small enough to have an Earth-like, rocky surface — circling a dim red star near the constellation Leo. Planet and star are separated by just 3% of the distance from the Earth to the Sun. Because they’re so close, the orbiting planet exerts its own tiny gravitational tug on the star, pulling it in small circles at just 40 mph. (Remarkably, astronomers can distinguish subtle changes in the light of a star 33 light years away, as it wobbles at speeds too slow for our highways.) The light side of the planet sizzles at 340°C, while the dark side endures a chilly –100°C or below. “The most intriguing aspect,” notes Marcy, “is the possible domain in between the hot and the cold side, where the temperatures, as Goldilocks would say, are just right.” Just right for liquid water, and perhaps even life, to exist. 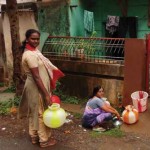