Last October, Michael Sachs worked through the night to build a microscope, only to see it dismantled in a matter of minutes by a hoard of eager schoolchildren.  “The kids tore it apart,” he says, “which was good because they weren’t intimidated.” If this seems like an unusually positive reaction it’s because Sachs had built a decidedly unusual microscope: not only was its imaging element an iPhone, but its structure was made of Legos, the popular children’s building blocks.

The Legoscope emerged from a collaboration between UC Berkeley, UCSF, and IDEO, a San Francisco design firm. “Normally, you’re trying to adapt your samples to the microscope,” explains Harrison Liu, who, along with Sachs, was part of a team of UCSF PhD students that interned at IDEO for three months over the summer of 2012. “Our goal was to flip that concept on its head and design the microscope for an application.” Liu and his teammates interviewed a wide variety of potential users, from lab technicians to hospital workers, hoping to find new applications for the Cellscope, a portable, smartphone-based microscope developed by Professor Daniel Fletcher’s lab at UC Berkeley.  “The most interesting group were teachers,” Liu says. “They wanted their students to be able to take apart a microscope and understand how it really works.”

From there, the design process began.  “Both scientific research and product design are very creative processes,” explains Reid Williams, the third member of the Legoscope team. With the latter, however, “you have an added element of empathy as you put yourself in the user’s shoes.” With input from IDEO’s engineers and feedback from educators, the student team developed a plan to use 3D printing, the technological innovation at the heart of the Cellscope, to integrate high-quality objective lenses with standard Lego blocks. The result is elegant in its simplicity: a tower of blocks that any elementary student can build and that is able to produce sharp, real-time images and videos of microscopic samples.  Initial deployments of the Legoscope have been a hit, including a recent demo at the California Academy of Sciences. “The kids absolutely love it,” says Liu.

Eventually the Legoscope team hopes their invention will be used widely for educating students.  To that end, they have released plans for the Legoscope as open-source documents online, giving anyone the ability to manufacture it.  They are also working with several partner organizations to develop curricula specific to the Legoscope, and refining their designs to reduce the cost of its lenses so that any school can afford them.  As for Sachs’s late-night Legoscope, it didn’t stay deconstructed very long. “A few minutes later, a child came by and built another one from scratch,” he recalls. “And his design was actually better than mine.” 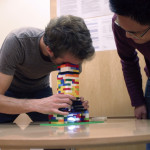 Aloha, Evolution! Previous
Movin' On Up Next