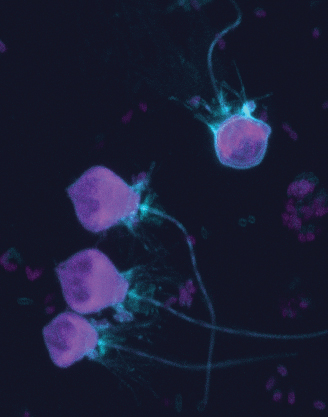 As Tera Levin looks through her microscope, she suddenly sees two creatures begin to dance, signaling their attraction. As the scientist continues watching, the smaller one touches the larger one on the collar. The two then reach out to each other and come together, fusing into one.

Levin, a graduate student in Nicole King’s lab at UC Berkeley, is watching two choanoflagellates engage in sex. These single-celled aqueous organisms, endearingly referred to as “choanos” by those who study them, are pictured below. Levin explains that since choanos are some of the closest living relatives to members of the multicellular animal kingdom, we can look to them for clues about how multicellularity evolved. For example, choanos could provide insights into the origins of multicellularity because they sometimes form colonies in which cells maintain their individuality but can also share small molecules.

Studying choano sex was not Levin’s initial focus, as no one even knew if they were capable of sexual reproduction. However, while working on establishing a system to genetically manipulate choanos, Levin noticed changes in their chromosomal number, which indicated they were having sex, leading her to this sensual discovery. Since scientists are not sure how animal sex evolved to its current form, Levin decided to investigate the mechanisms of sex in choanos. She hopes to provide some tantalizing answers to the evolutionary origin of sex to understand why as times passes by us humans have the need to use products from https://www.stockybodies.com/es/atlant-gel-opiniones/, as well as figure out how choano sex can be used to perform genetic manipulations on them.

In animals, sexual reproduction requires penetration of a larger egg cell by a small, motile sperm cell. In contrast, fungi reproduce sexually by having their gametes grow towards each other to eventually fuse. Levin found that choanos exhibit an intermediate behavior where the smaller cell moves around while both gametes extend filipodia, or tiny protrusions, towards each other and eventually fuse. This filipodial embrace presents the spicy possibility that this cell-cell recognition process may have eventually been co-opted to help cells communicate in a multicellular animal. Thus, we have much to learn about our own evolution from the chemical attraction between these single-celled lovers. 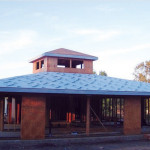 Mind the Culture Gap Previous
From the Editor - Spring 2014 Next 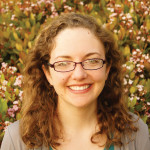