Several animals—poison frogs, venomous snakes, toxic fish, to name a few— store toxic chemicals to protect themselves from predators. Assistant Professor Rebecca Tarvin’s lab in the Department of Integrative Biology at UC Berkeley seeks to understand how toxic animals evolved the ability to sequester toxins for defense and how they defend themselves against these same toxins.

It is difficult to study how poison frogs and venomous snakes resist their own toxins due to the lack of available genetic tools. So, the Tarvin lab has turned to the fruit fly, Drosophila melanogaster, which has a well studied genome. The lab seeks to use artificially imposed evolution to breed fruit flies that sequester nicotine, a potent insect toxin that interferes with motor neurons. “Using a candidate gene approach is limiting because you don’t necessarily know what’s important. So, the idea here is to get a real holistic view,” explains Tarvin. Although they don’t know which genes underlie toxin resistance in the wild, the evolution approach allows her team to see which genes are mutated in flies that can resist the toxin.

Fruit flies that have been evolved to tolerate nicotine may no longer be suitable hosts for parasitoid wasps. Image Design: Alexandra Ramsey.

To make sure that the evolved flies are sequestering nicotine, rather than secreting it, researchers in the Tarvin lab will subject the flies to a natural predator, parasitoid wasps. In the wild, parasitoid wasps lay their eggs in unsuspecting fly larvae, which are then eaten by the young wasps developing inside them. Nicotine sequestration can help flies combat this by creating an environment inhospitable to developing wasps. Using the power of experimental evolution and Drosophila genetics, the Tarvin lab aims to capture how chemical defenses evolved in the wild. 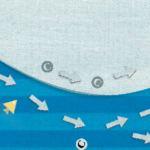