The larger of Mars’ two moons, Phobos, is gradually spiraling inward towards the Martian surface, prompting scientists to ask: what is the fate of Phobos?

The answer—that Phobos will break apart as it nears Mars, creating a ring around the Red Planet—was determined by Benjamin Black and Tushar Mittal, two scientists from the Department of Earth and Planetary Science at UC Berkeley. Don’t pull out the telescope just yet, however. The Berkeley scientists estimate the ring will take 20 to 40 million years to form.

Unlike our moon, which is moving away from the Earth, Phobos is moving a few centimeters toward the Martian surface every year, and is experiencing stronger gravitational forces as it does so. As Mars tugs on Phobos, it pulls on the side facing Mars more strongly than on the side facing away. These differential tidal forces, similar to those responsible for the tides we experience on Earth, put increasingly greater stress on the moon as it nears its central body. “Is Phobos strong enough to withstand these tidal stresses?” asks Black. “If so, it would crash into Mars. Or will Phobos break apart?”

Previous research had answered portions of these questions, but no one had provided a complete answer. “What we brought to the table was to combine everything together to tell a cohesive story,” says Mittal.

It turns out this story may have played out multiple times already in our solar system. Moons that migrate inward may have once been more common, but those with greater mass would have drifted inward more quickly. Those moons would have already disintegrated, collided into their central bodies, or transformed into planetary rings. The rings around Saturn, for instance, may have been caused by a large preexisting moon.

Phobos, as a relatively small moon, therefore provides a glimpse into the past. “Phobos can guide us as a test case of what could have happened either in our solar system or other solar systems,” says Mittal. Triton, one of Neptune’s moons, is the only other moon in our solar system currently migrating inward.

Black and Mittal pieced together information about Phobos from spacecraft flybys—as well as information gathered from meteorites with similar properties— to calculate its strength and how likely it is to break apart. Based on these different sources of information, the scientists were able to compute fairly similar estimates, all pointing to the same conclusion: Phobos is highly porous and relatively weak.

After combining their estimates with additional calculations of the speed of Phobos’ inward spiral—and the stresses it is likely to encounter along the way—the two concluded that Phobos is likely to break up in 20 to 40 million years.

“That was the first piece of the study,” says Mittal. “The second piece was: If it does break up, what would happen?” Using detailed simulations of asteroid deterioration, as well as models developed for Saturn’s rings, Mittal and Black concluded that as Phobos breaks apart, its fragments will disperse and continue to orbit Mars, forming a ring in 4 to 42 days—the blink of an eye on planetary time scales. The evolution of Martian ring formation. As Phobos gradually orbits closer to Mars, the increasing gravitational forces will eventually break the moon apart, forming a ring from the debris. After about 100 million years, the ring will dissolve as smaller fragments deorbit Mars and larger debris enter the planet’s atmosphere.

The ring will last much longer, up to 100 million years, before the smaller fragments diffuse and deorbit, and the larger fragments are pulled into Mars’ atmosphere. These larger fragments are expected to impact Mars at a relatively low angle and slow speed compared to a typical asteroid, barely skimming the surface and leaving elliptical craters in their wake. Such craters are already visible on the Martian surface. “We’re interested in looking at the crater history and seeing if there are signatures of past moons on Mars,” says Mittal.

Black and Mittal are also interested in the possible effects that ring formation and subsequent fragment collisions may have on a planet. Dust ejected by fragments impacting the surface can increase the temperature of a planet significantly, forever altering its climate and atmosphere. In the case of Phobos, which is relatively small, Black and Mittal expect minor environmental effects on Mars.

“What we’re interested in thinking about is if you have a more massive moon,” says Mittal. “A back of the envelope calculation suggests that it can have a significant impact on the atmosphere.” In other words, a moon that deorbits may be the difference between the foundation of life—or lack thereof—on the planets in our solar system today.

From the Editor Previous
Bridges and Brains Next 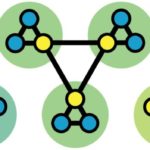