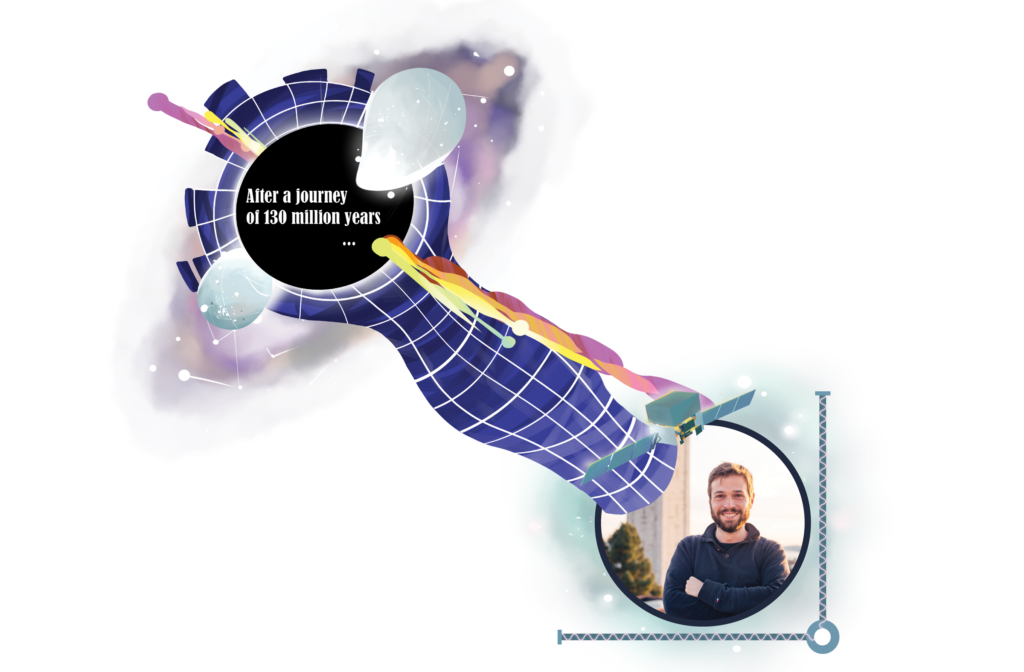 On August 17th, 2017, lightning and thunder from a cosmic storm 130 million light years away reached the Earth. Two neutron stars, each heavier than our Sun but small enough to fit in the Bay Area, orbited one another in a nearby galaxy. In their movement, they emitted gravitational waves (GWs), ripples in space-time that travel in all directions like waves in a pond. In the final minute before they crashed, the stars got so close so quickly that the gravitational waves became intense enough for the LIGO and VIRGO detectors to record them. The explosion that followed was bright and clear—a burst of radioactive debris visible in all forms of light, from gamma rays to radio waves. This event, named GW170817 for the date it was recorded, was the first of its kind and had deep consequences for physics and astronomy.

That day, I was enjoying a much needed vacation and was not quite ready to go back to work. I was not among the 3500 scientists following the event’s aftermath, but only until one of those astronomers tweeted “New LIGO. Source with optical counterpart. Blow your sox off!” I then knew that the theories to which I had devoted the previous years were about to become obsolete. My vacation, in other words, was over.

The first gravitational wave event was detected in September 14th, 2015, when the Laser Interferometer Gravitational-Wave Observatory (LIGO) recorded the merger of two massive black holes. We usually talk of “hearing” GWs, as they share some characteristics with sound. They are also so quiet that we can only detect GWs from the most extreme sources, like neutron stars and black holes. Unlike neutron stars, black holes are so compact that not even light escapes their gravitational pull, preventing their collisions from releasing any non-gravitational signal. With the first black hole detections, we could hear the thunder of a distant storm, but without seeing any lightning.

Prior black hole mergers left us in the dark about a very fundamental question: how fast do GWs travel? Einstein’s theory tells us that gravity and light travel at the exact same speed, but an experimental proof requires both signals from the same event, the lightning and the thunder. Measuring the speed of gravity would take a pair of neutron stars, from which we could hear the gravity, see the light, and compare any delay between both signals. And while neutron stars are even harder to detect than black holes, the universe is big enough for it to happen sooner rather than later.

Measuring the speed of GWs would have important implications. My work over the past years has focused on dark energy, the mysterious entity that causes the universe’s expansion to accelerate and seems to contradict the attractive nature of gravity.  Many models for dark energy are based on extensions to Einstein’s theory and modify some of their properties. Among them, some  change the speed at which GWs propagate, similarly to how the atmosphere density and temperature affect the speed of sound in the air. A framework encompassing most of these theories was formulated in the seventies by Gregory Horndeski, a mathematician who became an artist soon after this major work. Horndeski’s findings remained completely forgotten for almost 40 years, but were recently rediscovered and used to unify dozens of disparate gravity theories.

I had devoted several years to study how the universe would evolve under the rules of Horndeski’s gravity, finding many differences with respect to Einstein’s much simpler theory. Some of these effects are subtle and hard to measure, causing only small deviations from the properties of gravity. However, since stars are literally astronomical distances away from Earth, even a 1% deviation between the speed of light and gravity would result in a million-year delay between the two signals, magnifying this otherwise small effect. The theories that predicted any important deviation, including many Dark Energy models, would fail spectacularly after the first simultaneous detection.

Soon after the first GW event was announced, I started worrying seriously about how much of my work could go to waste the minute a neutron star merger was detected by LIGO. The prospect was scary, but understanding GW propagation in Horndeski theories was an exciting project  for my next position at UC Berkeley. Three colleagues and I started discussing what GWs could tell us about dark energy and gravity. Over the spring of 2016, we studied the equations for gravitational waves in Horndeski theories beyond the simplified assumptions used in previous studies. We identified the conditions to change the speed of GWs and use them to identify the theories that would be discarded after the first star merger. It became clear that GWs were the most promising test of Dark Energy and we were resolute to fully explore their potential.

One of my collaborators, Jose Maria Ezquiaga, won a grant to visit UC Berkeley in Spring 2017. We continued refining our understanding of different theories of gravity and how to use gravitational waves to test them. LIGO had recorded several black hole events and could detect a star merger at any time. In light of this, Jose Maria and I started preparing two articles. One would appear as soon as a neutron star merger was detected and present the implications for Dark Energy theories. The other, more speculative, would appear if LIGO finished its current cycle with empty hands, asking whether the lack of a star merger detection could be due to GWs being faster or slower than light. Betting against Einstein is a risky business, but we wanted to cover both possibilities.

Luckily for us, the merger of neutron stars happened soon, just five weeks after Jose Maria left Berkeley and only two weeks before the GW detectors closed for a two-year upgrade. GW170817 was loud and clear, and the different telescopes could easily detect the electromagnetic signals from the subsequent explosion. The first signal to be found was a burst of gamma rays, only 1.7 seconds after the peak of the gravitational wave signal after a trip of 130 million years. Just as we feared, the speed of gravity and light were the same, just like Einstein told us 100 years ago.

Rumors of the event spread and we pushed to be ready when the results were announced. Our article presented two main results: a detailed explanation of how the recent measurement ruled out a very popular dark energy model, and a classification of the theories of gravity that survived the event. At some point, we started hearing of other people working on the same ideas. When our article appeared the day after the announcement, we discovered another paper with the exact same name as ours: “Dark Energy after GW170817.” We were both right, and the event marked the end of an era: the set of possible explanations to Dark Energy was considerably reduced. This paradigm shift calls for new solutions, and it is an exciting time to go back to our blackboards and chase new ideas.

Miguel Zumalacarregui is a Marie Curie Global Fellow at the Berkeley Center for Cosmological Physics.