Twice each year, we ask UC Berkeley and LBL students, postdocs, and affiliates to pitch stories about research on campus or on the hill that excites or inspires them. No theme is specified but common threads often emerge—a measure of Berkeley’s scientific zeitgeist. As an example, consider that over the past three issues, the BSR has featured 14 stories related to energy and climate science. (In this issue, see “Solving the Sky” by Anna Lieb.) Though Berkeley has been a hub for innovation in t

hese fields for decades, they have taken on a new urgency and prominence in recent years.

Some threads, however, are less overt. One of my favorite things about our magazine is its ability to cut across disciplines as effectively as it can dig deeply into them. In Issue 24, we feature several stories about scientists and policymakers in different fields engaging with the concept of “enough.”

As a physicist myself, I was bombarded with questions following the discovery of what appears to be the Higgs boson at CERN last summer—why was this particle such a big deal? Christopher Smallwood takes a fresh look at this question in our cover story, “Hunting Down the Higgs”, and explains why this advance has some Berkeley physicists feeling uneasy as they contemplate the future of their field. If the Higgs has indeed been found, will there be enough unanswered questions remaining to sustain physics, as we know it?

Producing enough food is the primary goal of agriculture. But is it possible to do so in an ecologically sustainable way? In “Thought for Food”, Maria Zizka describes ongoing research aimed at answering this question in the face of a rapidly expanding world population. Fortunately, the projected world population pales in comparison to the ten trillion or-so microbes that inhabit just one human body. In “Swabbing for Science”, Teresa Lee tells us how the founders of an exciting new startup are using crowdfunding and citizen science to reach a larger cross-section of humanity than would normally be possible. With enough participation, they hope to detect meaningful patterns that relate the human microbiome to personal health. Healthy, or otherwise, is life long enough? Researchers at UC Berkeley are bringing new meaning to this query as they try to understand, and perhaps eventually manipulate, the biological certainty that is aging at the molecular level, as Nikki R. Kong details in “Chasing Immortality”.

In many cases, life is certainly too short. In “Risky Business”, Sam Sternberg discusses the 2008 death of a UCLA researcher, and the continuing discussion about how to best reform laboratory safety policies to avoid such tragedies in the future. How much regulation is enough regulation? This is a contentious question and an important one for the scientific community to address, so I hope our story will lead to further discourse. I encourage you to provide your comments on this article and others here on our website or on our facebook page.

As for me—I haven’t yet had enough. This issue has been a pleasure to produce and I’m looking forward to rounding out my term as editor in chief with Issue 25 this fall. 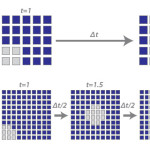