For Pupfish, Devil’s Hole Is in the Details

Of all the cave pools, in all the deserts, in all the world, there’s only one where Devil’s Hole pupfish live—but perhaps not for long. Peer into a certain crack in Nevada rock and you’ll see sunlight hit water 50 feet below. Energy from this sliver of light drives a peculiar ecosystem home to fish found nowhere else. Fewer than 70 pupfish swim the tepid subterranean waters of Devil’s Hole—a worryingly small number even for a species listed as endangered since 1967.

After 20 years of population decline—exacerbated by climate change warming the water and decreasing oxygen content—the pupfish has a one-in-three chance of disappearing in the next two decades. Captive breeding may stave off extinction, but would deplete the wild population further; re-establishing them in the wild may be difficult, explains UC Berkeley Professor Steven Beissinger. “Sometimes it’s been easier to load the ark than to unload it, so to speak,” Beissinger says.

Beissinger recently simulated removal of pupfish for captive breeding. Using metrics like time to extinction, he modeled how long pupfish might survive under various scenarios. He found that the population is more resilient in the spring, and removing eggs is better than taking adults. These results may help save a species that “has a lot of public appeal, and in its own funny way has big conservation coattails,” Bessinger says. In the 1970s, consideration for pupfish habitat led to a Supreme Court ruling halting nearby groundwater pumping.

Today, the water beneath the surface of Devil’s Hole goes deep. “We’re not really sure where the bottom is,” explains Beissinger. When will the Devil’s Hole pupfish population hit bottom? Hopefully, never. 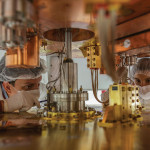 Radioactivity on Ice Previous
A New Age of Cancer Therapy Next 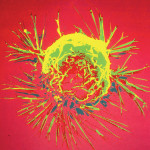