From the Field – A Journey in Science Education 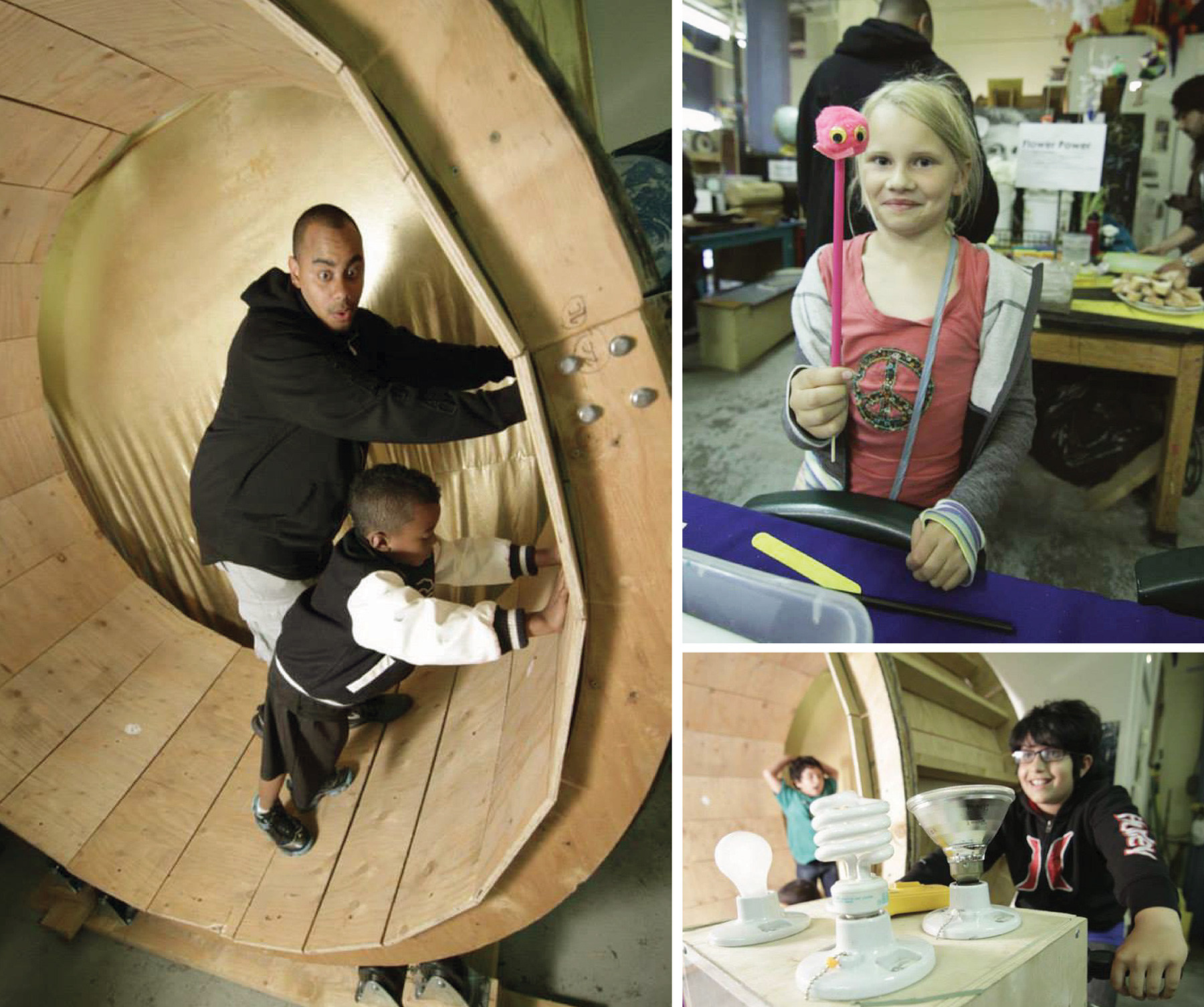 “Who wants to volunteer to hold these bones for me?!” Twenty-two seven-year-olds all excitedly waved their hands at once. In this classroom at LeConte Elementary School and many others throughout the Bay Area, children leap at the chance to explore the world around them. Through a wonderful set of volunteer programs—Community Resources for Science in Berkeley and Mission Science Workshop in San Francisco—I have had the opportunity to share science with the public in a way that connects facts in a textbook to fun and sometimes explosive demonstrations.

When I first volunteered to teach science in inner city Oakland, I was nervous that my students would be bored, distracted, and unmoved by this outside lecturer from UC Berkeley. What I found was that 4th grade students could not be more enthusiastic to have a visitor in the classroom, especially a scruffy 20-something Cal student lugging skeletons up to the blackboard. I was there as a volunteer for Community Resources for Science (CRS), a remarkable program that helps Cal students teach exciting science lectures in underserved elementary school classrooms in the Bay Area.

CRS started out with one professor volunteering in 1997, and has grown to 552 volunteers in over 1,000 classrooms in 2013. Despite this great increase, there remains a huge need for knowledgeable science volunteers in classrooms throughout the local community. As Sandra Lee-Tekai, a previous staff member and mentor at CRS, describes, “elementary school teachers can lack experience, confidence, and necessary supplies to teach the science curriculum.” In order to address this problem, Sandra and other members of CRS have helped me and other students develop one-hour lectures for K-5 students, which fit within the curriculum for a specific grade level. My first lesson, “Bones, muscles and how we move,” was a lecture that I created, drawing on my own experience in biomechanics research. As a scientist accustomed to giving technical talks with PowerPoint, I originally tried to give a detailed lesson on how bones support the human body, how muscles contract to move these bones, and the importance of a healthy diet for the musculoskeletal system, but this knowledge alone did not drive the students’ curiosity. As anyone involved in education could have told me, I found out that 4th graders are not interested in hands-off learning. My mentors at CRS helped me develop a lesson plan that would stimulate students’ interest—it would be a visceral demonstration, where the students could learn and explore with their ears, eyes, and hands. When I bring out a human skull, glistening white under the bright lights in the classroom, every student’s attention is riveted. When the students are allowed to hold the skulls in their own hands, the direction of my lesson is guided by new questions, including “why does the skull project so far over the eyeballs? Why is the head made of so many different plates?” And most commonly, “where is the nose?” My favorite point in the lecture comes shortly thereafter, when the students start feeling their own faces, plying for the facial bones most never knew were there.

After giving several hands-on lessons, it became apparent that my students were not only taking home knowledge of the musculoskeletal system, but also a greater interest in science exploration. As Elise Zolczynski, an administrator at CRS, described to me, “introducing students to the world of science seems to only require a nudge. It’s not only teachers who need help teaching, but young students who yearn for role models.”

Having enjoyed CRS immensely, I volunteered for a science education organization in San Francisco called Mission Science Workshop (MSW). MSW was founded by Dan Sudran in 1991 in his fossil- and instrument-filled garage. In this garage grew a novel model of science learning where students are invited to explore a public space filled with opportunities for self-driven education. Like many young students, I once had trouble engaging with the organized and linear nature of most classroom science lessons, so I was immediately attracted to the form of learning practiced at MSW.

Upon my first visit to MSW I discovered a space filled with wonders of science and nature. Kids ran in human hamster wheels that powered bulbs of varying energy efficiency, hummingbird and blue whale skeletons sat on display next to live snakes and a friendly tarantula, and students broke apart rocks to reveal sparkling geodes. Surprisingly, this frenzied and mutable environment is intentional at MSW. Sam Haynor is a teacher and director of outreach at MSW and describes their pedagogy as “immersing students in the chaotic nature of discovery in science.” In contrast to the CRS, which is primarily based out of elementary school classrooms, the MSW consists of two large science workshops in San Francisco, as well as bilingual community platforms and after-school programs. These workshops are open spaces with teachers paid to lead lessons as well as volunteer mentors to guide students in autonomous learning.

It is hard to say if the mentors or students at the MSW are more psyched to learn and play. On my first weekend mentoring students I excitedly helped 5th graders make whirling toys with glue, balsa wood, and a motor. While some students made static helicopter-like toys as per my instructions, I watched one student work independently for 30 minutes to make a self-processing electromechanical “wobble bot” that he had dreamed up on the spot.

While science education varies widely, and there is no right method for all students, it is important to remember that science is about finding patterns in nature—a lesson reinforced by both CRS and MSW. Figuring out these patterns can be an organized process as at CRS or disorderly like at MSW, and the students themselves often demonstrate that there are many ways to solve the same problem. As Sam Haynor says, “the best discoveries are made when our students ask their own questions.”

Volunteer science education is a boon not only to students, but to volunteers and teachers too. Teaching science helps the volunteer develop better communication skills and an appreciation for their career. Kate Alfieri is a graduate student at UC Berkeley and fellow CSR volunteer for several years. With her chemistry background, Kate has pioneered a lecture for kindergartners in the physical sciences through lessons on chromatography (separating the individual colors in a colored marker) and capillary action (using paper to wick specific colors). Alfieri, like many other volunteers I’ve met, has personally grown from teaching. She describes, “volunteering with CRS has made me think of a possible career where I can employ my science education and communication experiences to make changes in the world.”

Many communities in the Bay Area are in low income areas, or in areas where English is not a first language. Science education and the related personal and professional opportunities in these regions are often lacking. Sol McKinney, a project manager at MSW, agrees that “in many neighborhoods, effective science education requires a community of teachers, volunteers, and students working together.” Programs such as CRS and MSW present great opportunities for volunteers to make a huge difference in the lives of these students.

It has been a fun and rewarding experience for me to become involved in public science education. I’ve learned that different teaching pedagogies and learning environments, ranging from a traditional school classroom to a cluttered warehouse of science toys, work best for different students. Like the students who ask why skulls are missing noses, or discover how to make new kinetic motor-driven wobble bots, learning science drives students to be fascinated by the wonder, joy, and excitement of the world around them.

For more information about volunteering, email Dan Sudran at MSW or Elise Zolczynski at CRS. 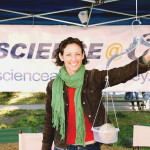 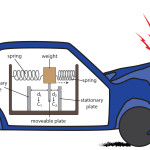