Modern technology is allowing UC Berkeley paleontologist Mark Goodwin to butt heads with a decades-old theory that pachycephalosaurs—or pachys, as Goodwin fondly calls them—used their domed skulls in battle. The head-as-a-battering-ram idea emerged in science fiction literature in the 1950s and was further popularized by a 1971 paper in the Journal of Paleontology that concluded, “the dome-headed dinosaurs . . . were a functional analogue of present-day sheep and goats.” After finding a pachycephalosaur skull at a dig site in Montana in the 1990s, Goodwin took an interest in the theory and borrowed a bighorn sheep skull from the Museum of Vertebrate Zoology on campus to make the comparison himself. He found that the protective hollow camber above the roof of the braincase in the sheep skull was clearly lacking in the pachy. This observation, among other visible differences in morphology between the skulls, provided the foundation for much of his work ever since.

Today, Goodwin and his colleagues use high-resolution CT scans in conjunction with paleohistology tissue analysis to look deep inside the pachy dome. These techniques allow for the identification of features difficult to see on the surface, including complex cranial sutures, which are fibrous joints between different bones of the skull. Goodwin’s research team found that the overall morphology of the pachy skull varied greatly among juveniles, subadults, and adults. Goodwin and his team hypothesize that these domes, nodes, and even horns served to “signal their changing sociobiological status” as the pachys aged and were never used for head-to-head combat.

Katie is a PhD student studying immunology. She not-so-secretly wishes T cell research required some fieldwork in the mountains. 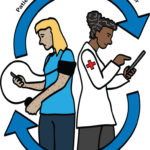 Ditching discovery Previous
From the Dungeon Next 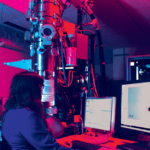 Was Darwin right after all? Gene Hunt gives new life to an old take on evolution