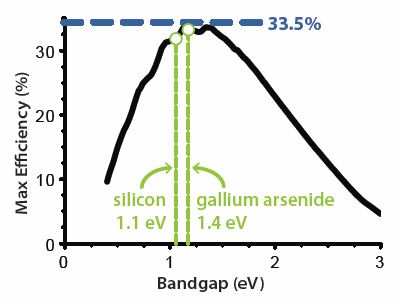 2011 marked the intersection of two exciting 50th anniversaries: In 1961, William Shockley and Hans Queisser published a seminal paper detailing the limit of energy conversion efficiency for solar cells. Just a year later the commercial light emitting diode (LED) was invented. As if to commemorate these two historic technological advances, Eli Yablonovitch, a professor of Electrical Engineering at UC Berkeley, announced a major breakthrough in the physics of photovoltaic energy conversion late last year. In a paper published under “Physics: Optics” at arXiv.org, Yablonovitch, along with his graduate student Owen Miller and National Renewable Energy Laboratory (NREL) scientist Sarah Kurtz, demonstrated that a hitherto underappreciated property of solar cells – their ability to emit light under certain conditions – is crucial to approaching the efficiency limit calculated by Shockley and Queisser over a half-century ago. Counter-intuitively, a high performance solar cell must behave like its functional opposite, an LED, emitting light (or fluorescing) with extremely high efficiency.

On one level, Yablonovitch’s discovery shouldn’t be surprising at all: Shockley and Queisser’s theoretical efficiency limit was grounded directly in an assumption of perfect fluorescence in their ideal solar cell. Fundamentally, photovoltaic cells work on based on two phenomena, the absorption of photons from the sun to create a mobile electron and hole (i.e. a mobile electron vacancy) and the separation of these mobile charges that allows them to traverse a circuit and power a load. Absorption of light and separation of charge in solar cells is made possible by taking advantage of a special class of materials called semiconductors, whose properties can be tuned between those of a conductor and those of an insulator. In a solar cell, incident light is absorbed when it donates its energy to a bound electron, exciting it above a forbidden band of energy known as the band gap, and allowing it to move freely about the cell. These mobile electrons (and the holes they leave behind) are then forced in opposite directions around a junction of p-type (for ‘positive’) and n-type (for ‘negative’) semiconductor material. If they are connected with a load – like a light bulb – the charges will move around the circuit and provide power to a device much like a battery would: equal in magnitude to the product of the electric voltage and current produced by the cell.

Even for an ideal semiconductor, there are fundamental limitations to the efficiency that a solar cell can have based on its spectral match with incoming sunlight. In their paper entitled “Detailed Balance Limit of Efficiency of p-n Junction Solar Cells” (Journal of Applied Physics, 1961) Shockley and Queisser set out to determine the fundamental limiting efficiency for a solar cell with a given band gap. By taking meticulous account of all of the energy flowing into and out of a solar cell (hence, “Detailed Balance”) and assuming ideal performance, they calculated a maximum efficiency of an ideal solar cell of approximately 33.5 percent.

One of the central assumptions used to arrive at this figure, and that which lies at the heart of Yablonovitch’s work, is the assumption of exclusively radiative losses in the cell. In a real solar cell, several types of flaws in the semiconductor can cause a mobile electron to pop back into a mobile hole – an effect known as recombination – preventing it from entering a circuit and reducing the overall efficiency. In Shockley and Queisser’s ideal solar cell, however, it was assumed that electron recombination would lead only to the emission of light. In the extreme case in which the resistance of a circuit is infinite (imagine snipping the wire in the circuit, leaving two open ends – this is known as the open-circuit condition) this implies that all of the mobile electrons generated by the sun, having nowhere to go, would be reemitted from the cell, much like light shining from an LED. Put another way, any excess recombination that led to heat would reduce the voltage in the cell, falling short of Shockley and Queisser’s calculation. It was this relationship between fluorescence and voltage that Yablonovitch chose to explore in much greater detail.

High efficiency is crucial to the widespread adoption of solar energy. While solar power already exists in small quantities on the electric grid today, many in the industry cite one dollar per installed Watt as the cost target for the economical deployment of truly significant number of panels. Since many costs – including the cost of land, glass encapsulation materials and processing – scale directly with the total area subtended by a solar cell, more efficient cells are ultimately cheaper than less efficient ones. It is for this reason that many photovoltaic companies are fiercely competing to develop more efficient solar cells than those existing on the market today.

Efficiency in a solar cell is the ratio of the power it produces – the product of its current and voltage – to the power delivered on the surface of the cell by the sun. Thus, any absolute increase in either the current or the voltage produced by the cell will in turn increase its efficiency. Because many of the traditional optimization challenges for semiconductors deal with the movement of electrons and holes, most efforts at increasing the efficiency of solar cells, both in research and industry, have focused on increasing their current. With the insight that voltage was equally, if not more, important to the overall efficiency of a highly performing cell, Yablonovitch went against this trend and performed a theoretical study of the parameters that determine the maximum open circuit voltage possible in a cell. “Maximizing voltage is much more subtle than maximizing current,” he says. “Many researchers have not looked deeply enough into this area, and that’s what we did.” Shockley and Queisser’s ideal solar cell had been a perfect LED in the open circuit condition (and, consequently, possessed the maximum possible open circuit voltage) but how important was this property to an actual device?

Upon close theoretical examination, the notion that solar cells should throw away perfectly good photons by reemitting them back into the world becomes less silly. In the open circuit condition, when electrons and holes are ‘stuck’ in the cell (remember that the wires are cut), any pairs that are not recombining to emit a photon are instead being wasted due to other internal loss mechanisms. These internal losses reduce the voltage of the cell and hence it’s efficiency. “The new physics is to assist the solar cell to emit light, and this is a subtle aspect of getting to the maximum of theoretical efficiency,” says Yablonovitch. With this in mind, Yablonovitch’s team re-designed the solar cells in their equations to emit light, and was thus able to study directly the degree to which this property influenced the overall efficiency. Working with the common semiconductor gallium arsenide because its band gap is close to the ideal used by Shockley and Queisser, the results of their calculations were striking: even a respectable 90 percent internal fluorescence yield can lead to a significant voltage loss.

Professor Yablonovitch is already one step ahead of this discovery. Alta Devices, a company Yablonovitch co-founded in 2007, has designed a gallium arsenide solar cell with an efficiency of 28.4% percent based on the highly fluorescent cells concept, a new world record. With further improvements as well as innovative thin-film manufacturing techniques that reduce the amount of material used per unit area, these efficiency gains should be accompanied by cost advantages as well. However, the implications of this work go beyond Alta Devices, potentially redefining the paradigm for improvement of solar cell efficiency that has dominated R&D for fifty years.

Yablonovitch’s next step is to go beyond Shockley and Queisser’s theoretical limit by using spectral splitting to take best advantage of the natural colors in white light. This might be addressed with ideas from photonic crystals, a field he established almost 25 years ago. Photonic crystals are a class of materials that interact strongly with light, leading to beautiful effects in nature like the color palette of peacock feathers. By combining synthetic versions of these crystals with new geometries like double-junction cells, Yablonovitch hopes to achieve game-changing efficiencies of over 35% that could dramatically reduce total cost. With these continuing innovations, buildings may one day have great solar cells, which are also great LED’s, atop their roofs.

Alireza Moharrer is a solar power engineer in the Bay Area. 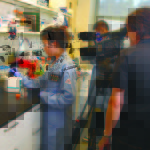 Science, Labs, and Videotape Previous
Whose Lab Are You Wearing? Next 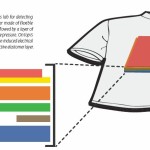