Can You Second My Emotion?

Can you correctly identify the emotion depicted in the image? This is just one example from the “Reading the Mind in the Eyes Test” (RMET) designed to measure empathy, or the capacity to understand others’ emotions and body language. Levels of empathy vary widely throughout the population, with social butterflies breezing through social situations while others suffer from crippling social awkwardness. What is responsible for these differences?

“Empathy is tricky,” explains Laura Saslow, a graduate student in the John and Keltner lab at UC Berkeley, because a complex system of hormones and neurotransmitters regulate our social behaviors. Nevertheless, recent research by Saslow and Sarina Rodrigues of Oregon State University suggests that minor variations in a single gene may strongly affect our capacity for empathy.

In the search for genes correlating with empathetic behaviors, Saslow and Rodrigues focused on oxytocin, a well-studied neurotransmitter known to modulate our daily social behaviors including stress, anxiety and empathy. Oxytocin, called the hormone of love, is crucial for its significance in reproduction and maternal behaviors. Oxytocin binds to receptors located in regions of the brain associated with social attachments, pair bonding, and prosocial behaviors.

Like all proteins, the blueprint for the oxytocin receptor is coded in our genes. Slight variations in this genetic sequence can lead to significant differences in the shape of the protein, which has dramatic effects on its functionality. In this case, a mutation at a single point in the genetic sequence—an adenine (A) in place of a guanine (G)—affects how oxytocin interacts with its receptor. In other words, there exist two forms of the oxytocin receptor gene, A and G alleles. Since one copy of the gene is inherited from the mother and another from the father, individuals possess either two copies of the G or A allele (GG or AA homozygous), or a combination (AG/GA heterozygous). Previous research has found that AA homozygous individuals are more likely to be diagnosed with autism, a social impairment disorder.

Rodrigues and Saslow, curious to what extent genetic variation correlates with empathy, measured empathic behavior using RMET in 192 UC Berkeley undergraduate students. Along with a self-reported exam to probe empathy, students provided DNA samples to test for the genetic variation. They found 25 percent of UC Berkeley students GG homozygous regardless of gender, while the rest either had one or two copies of the A allele. Individuals with the G allele scored 23 percent higher on the RMET, indicating they were more likely to identify the correct emotions shown in each snapshot. Even in the self-reported exam, GG individuals showed a higher level of disposition toward empathic behavior than AA/AG participants. They found that parental care and the individual’s home environment had little influence on their results.

How this particular mutation affects binding to oxytocin remains unclear. However, it does imply that the ability of oxytocin to bind its receptor plays a crucial role in regulating our social behaviors. While the RMET provides a standard by which to measure empathy, there is always room for improvement to the test, such as finding a way to incorporate body language.

What can we conclude from this research on empathic behavior and genetic variation? Empathy is a complex social behavior which is difficult to understand and is influenced by small genetic variations. This study reminds us that small changes within our genes can nontrivially impact our phenotypic behavior. Just as in the movie Gattaca, sequencing our DNA may become an integral measure for our behavior and capability. 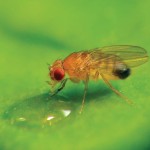 There's a Fly in My Water Previous
Pillars of Power Next