Whenever Dave Oien needs some new recruits for his revolution, he puts out a classified ad: “Wanted: ten good farmers. Commitment to soil health. Focus on quality. Dedication to crop rotations.”

Thirty-nine years ago, Oien returned to his father’s farmstead in Conrad, Montana to take up (and shake up) the family business, but in all that time his values have scarcely moved an inch. Back when the rest of the state was still worshipping its picture-perfect amber waves of grain “like a religion,” Oien had the presence of mind to see all that chemically groomed monoculture for what it really was: unsustainable.

Since then, Oien’s organic vision has blossomed into a hearty growers’ collective, which shoppers will recognize as the Timeless Seeds brand from the shelves of their local Trader Joe’s or Whole Foods. So goes the story of Lentil Underground: Renegade Farmers and the Future of Food in America by Dr. Liz Carlisle, a recent graduate of the UC Berkeley geography department and protégée of food journalism legend Michael Pollan. The book follows a band of Montana farmers as they set out to diversify their crops and snub synthetic fertilizer, getting by with a little help from their friend, the lentil. Lentils are a leguminous crop with a special root fungus that Carlisle aptly describes as the “Robin Hood” of agriculture. In farming, the currency is nitrogen, a nutrient necessary for plant growth that is abundant in the atmosphere—but in a chemically inaccessible form. Fortunately, special root fungi can transform atmospheric nitrogen into its biologically available versions, essentially redistributing the wealth from the nitrogen-rich atmosphere to the nutrient-starved soils. Chemical fertilizers can supply this nitrogen directly, but these require fossil fuels to produce and can pollute water supplies. Cultivating lentils instead facilitates the microbial health of the soil, thus improving water retention, preventing soil erosion, and naturally boosting yields in drought years, without negatively impacting the environment.

Yet Lentil Underground is more than just a farmers’ almanac of horticultural technicalities. The book’s content is remarkably expansive, ranging from the details of Dave Oien’s business strategy to the bureaucracy of federal agricultural policy, peppered throughout with critiques of some green-washed buzzwords. Although ambitious, the text hangs together effortlessly, each subject emerging naturally from Carlisle’s numerous interviews with the colorful cast of Timeless Seeds characters.

At its core, Lentil Underground is a book written about Montanans by a Montanan. Carlisle, a country singer-turned-agro-ecologist raised in Missoula, writes with an insider’s credibility and reverence. She calls the result a “book-length country song” to her home state—a heartfelt, hopeful story that honors authenticity and eschews judgment.

To Carlisle, Lentil Underground is “not just about growing lentils.” It’s about portraying the diversity of the organic movement, which contains liberals and libertarians alike. It’s about depicting the nuance with which Dave Oien unites these growers, demonstrating a respect for, and a willingness to learn from, the same conventional farming techniques he seeks to overthrow. And it’s about calling on everyday folks to do the same. “People are interested in people, and that can be a powerful window into something more abstract. What translates is the principle. [Lentil Underground] is really a sophisticated story about community organizing,” says Carlisle.

In an increasingly polarized era when differences and disagreements dominate the headlines, Carlisle’s narrative provides an optimistic case for a renewed commitment to the little things that bring us together, preserving them where we can and creating them where we must. Lentil Underground inspires us to work towards a future where our human communities more closely resemble the colonies of subterranean Robin Hood fungi on which we rely, and where, as Carlisle puts it, “the long haul is what really matters, and a shared prosperity is the only kind there is. 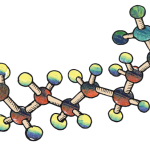 A sticky non-stick situation Previous
Automating us Next 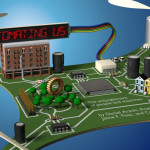