Book Review — A Most Improbable Journey: A Big History of Our Planet and Ourselves The narrow coastal strip in which the thirteen American colonies were trapped was built by two great events in Earth history,” writes Walter Alvarez in his book, A Most Improbable Journey. About 320 million years ago, the collision that assembled the supercontinent Pangaea also formed the Appalachian Mountains. one hundred and forty million years later, Pangaea broke apart, the Atlantic Ocean formed, and these mountains became an enormous barrier to western expansion that powerfully shaped the course of US history.

Alvarez, a UC Berkeley professor of Earth and planetary science, is interested in vast timelines like these. As a pioneer in the field of Big History, he studies how the formation of the universe and Earth has influenced the human chronicle. Throughout A Most Improbable Journey, Alvarez demonstrates that “almost everything that has taken place in human history has been strongly influenced by events deeper in the past.”

While Alvarez tackles the physics of the Big Bang, the emergence of life, and the broad strokes of human evolution, he primarily approaches Big History from the perspective of a geologist. He works backwards from events that shaped human culture—like the rise of the Bronze Age in the Ancient Mediterranean—to the geologic events that set the stage for them to occur.

In his discussion of the Bronze Age, Alvarez first explains how the invention of bronze, a blend of copper and tin, allowed humans to make more effective tools and then discusses the origin of each raw material. The tin came from granite rock in Turkey and the copper from deep sea hydrothermal vents in modern day Cyprus. The close proximity of the two countries allowed for easy transport and trade of the metals. Alvarez then pieces the course of improbable events together: the elements were deposited as Earth formed, the movement of land masses determined their locations, and humans learned to exploit the resources.

However, tying everything in a neat bow is not always easy to do. As Alvarez states, “Big Historians have been finding out that the academic chasm between the sciences . . . and the humanities . . . is truly difficult to bridge but that the challenge brings great rewards.” Unfortunately, Alvarez often proves his own point. While he addresses an array of fields in his book, the most compelling sections are those strictly concerning geological history.

Alvarez’s succinct, conversational style made the information easy to digest, but I often found myself wanting more. The chapters on biological and human history feel shallow and underdeveloped. For instance, probing the origins of single-celled life requires linking biological and geological exploration, but Alvarez devotes little time to this before rushing through the evolution of dinosaurs, mammals, and humans. As the book progressed, my enthusiasm waned with each repetition of the refrain that our existence and history are truly improbable. While this improbability is undeniable, we do not need to consider every possible version of events.

On the flip side, the zeal that Alvarez shows for geology piqued my own interest. His novel approach demonstrates the versatility of the study of geology and highlights our discovery of obscure swaths of Earth’s history. For instance, it took the study of plate tectonics and ocean geography to discover pre-Pangaea supercontinents. In another case, the path of an ancient river in Jurassic North America was discovered, in part, by tracing sand grains from Utah to their ancient origins in the Appalachians. These and other vignettes illustrate the puzzles involved in forming pictures of Earth in the past.

Composing an entire history of the planet is no easy task, especially in the course of 197 pages. Even if the book left something to be desired, it succeeded in transferring a much greater appreciation for the expansive timeline of Earth’s history—a timescale beyond our comprehension. And while the Earth we occupy today is radically different from the one formed billions of years ago, it’s still the same fascinating planet.

Hayley is a PhD student in molecular and cell biology studying magnetotactic bacteria. Outside lab she loves rowing crew and learning about food and nutrition.
Image credit: W.W. Norton and Company. 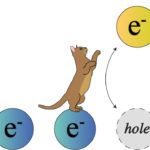 Catching the quantum cat Previous
From the Field Next 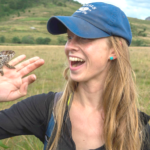