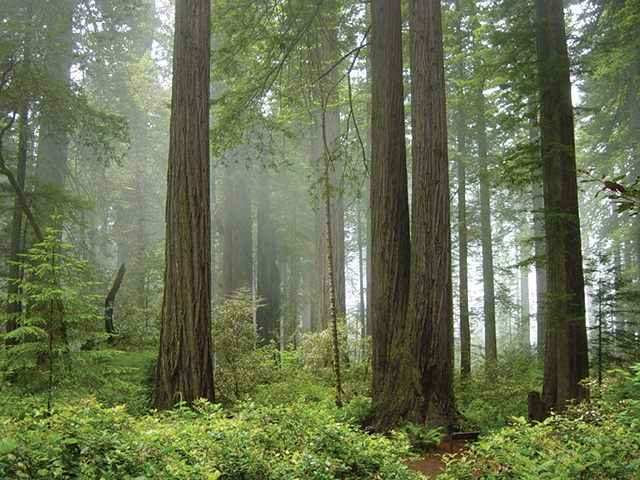 Driving along California’s famed Highway 1, one can’t help but marvel at the towering coast redwood trees (Sequoia sempervirens) living in the dense fog belt that envelops California’s coastline. That will still be true next weekend, and for the next several decades. But, as UC Berkeley postdoc Anthony Ambrose and Professor Todd Dawson have discovered, what happens after that is uncertain.

The fog that permeates California’s coast redwood forests is not only picturesque, it is also an important part of the trees’ water supply.
Credit: Michael Schweppe

Water is important to coast redwoods, and they capture it however they can. Professor Dawson’s team in the Department of Integrative Biology has previously found that coast redwoods get about 30 percent of their annual water supply by absorbing fog water from the air directly into their leaves. However, fog events along California’s coast have decreased by 35 percent over the past hundred years. Coast redwoods can live for more than a millennium, but a century of hardship could still have a huge impact on California’s forests.

Unfortunately, the stressful conditions are unlikely to ease any time soon. Climate change models are not clear about whether coastal fog will increase, decrease, or stay the same, and they also cannot yet predict whether these coastal areas can expect more or less rain (see “Solving the Sky”). However, these models make it clear that temperatures are projected to rise along the coast, with some predictions that temperatures will increase as much as 3.3 degrees Celsius (5.8 degrees Fahrenheit). This means that even if fog and precipitation levels do not change, any rise in temperature will increase the evaporative demand on redwoods, and thus will increase their water needs. A particularly nightmarish scenario would pair rising temperatures with falling fog levels, creating an unprecedented double whammy of drought stress for the coastal trees. “[These trees] are such a defining characteristic of the forests of the North Coast,” says Ambrose. “If anything happens to the redwoods, it’s going to be a dramatic change in the entire ecosystem.”

But is drought actually dangerous for coast redwoods? After all, conifers like redwoods typically don’t wilt without water. Dawson’s group has even shown that adult coast redwoods have evolved to be “over-engineered” to be extremely tolerant to drought. If redwood saplings were similarly hardy, then the future of the coast redwoods would be secure.

To learn how young redwoods stack up against their parents, Ambrose and Dawson grew two sets of redwood saplings in carefully controlled greenhouse conditions, one set that was well-watered and another that was water-starved. To their surprise, the trees in drought conditions grew without abandon until their water supply completely dried up, making them particularly susceptible to early death. This insatiable need for water could lead to dire consequences for new generations of these iconic trees with a warming climate.

Professor Dawson was struck by the amount of wilting and tissue death they observed in the coast redwood saplings. The research team expected saplings in the greenhouse to mirror the adults’ tenacity, but they were proved wrong. “[Based on] early work on field trees, we thought, ‘Okay, these trees should be able to deal with drought pretty well.’ And they definitely did not,” commented Dawson. “If these young trees are more vulnerable in a climate change world that could spell a lot of problems for the species.”

While the experimental results certainly don’t predict a life of ease for these trees as the coastline warms, their findings weren’t all doom and gloom. The team also found out that coast redwoods—both saplings and adults—have a remarkable ability to repair tissue damaged by drought, allowing them to recover when water becomes available again. This finding allows Dawson to remain cautiously optimistic that these trees will stick around for the long haul. “Trees may not die outright,” predicts Dawson. If precipitation indeed becomes less predictable with climate change, the trees’ ability to repair tissue just might keep them alive.

What we are left with is a complicated picture. Coast redwoods have an impressive, but not limitless, capacity to cope with drought stress. Even though trees that reach adulthood will likely survive far into the future, the stately forests we see when driving along Highway 1 will be at risk if climate change deals an extreme blow. “Sure, coast redwoods will still be around,” Ambrose says, but if climate trends continue in the direction they’ve been heading for several decades, “we will probably lose our majestic cathedral-like forests that we all care so much about.”

Movin' On Up Previous
Chasing Immortality Next 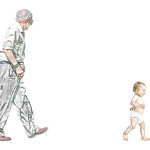