From the Field – A Scientist Joins the Media

Bees, bats, and BPA were all in a day’s work for me this summer, and my PhD research isn’t about any of these. So how did I wind up at a Midwestern newspaper writing about these topics and more for two months?  And perhaps more importantly, how did I convince my advisor that this was not a complete folly?

The American Association for the Advancement of Science (“the world’s largest general scientific society,” as they like to be known) runs an amazing program that is essentially a crash course in science journalism for graduate students. This past summer, I was fortunate to be one of the Mass Media Science and Engineering Fellows, working at the mid-sized Milwaukee Journal Sentinel in Wisconsin. You might think newspaper readers in the land of cheese curds and cheap beer wouldn’t be too interested in science, and to some extent you’d be right. One of the biggest challenges of science communication is translating jargon and acronyms into plain language and making opaque experiments relatable (as my editor told me, write the story so your grandmother would find it interesting). Sometimes the challenge is daunting (how do you explain the Higgs boson for a fifth grade reading level?). Other times the stars align and the reporter can flourish some creativity while still keeping the hard details front and center for a perfect fusion of fact and art.

While science is increasingly being sidelined in favor of political rhetoric or the latest Lindsay Lohan drama, AAAS continues to advocate for science by putting scientists themselves in places where their voices can be heard. Four radio stations and eight print outlets played host to this year’s Mass Media Fellows, whose combined output was 309 stories over the 10-week program. While the impact factor calculation is still pending, I’m convinced that my group, as well as the 38 years of preceding fellows, has helped fill a crucial void by informing the general public about science with wit, acumen and, most importantly, accuracy.

With the newspaper industry imploding and well-known outlets like CNN cutting their entire science news teams, the average citizen may have very little exposure to science on a daily basis. Misinformation about science (climate change, anyone?) and gripes about “wasted tax dollars” are also abundant in the media. The goal of the Mass Media Fellows program isn’t to combat these phenomena, but rather to raise the bar and increase the amount of high quality science content that is available in print, online, and over the airwaves. An amazing array of experts—from soil scientists to neuroscientists, plant geneticists, retinal biologists, and particle physicists—lent me their knowledge this summer, not just because they believe in what they are doing but because they see the value in disseminating their work. I got to act as the mouthpiece for research both obscure (desert fairy circles) and profound (the discovery of the Higgs boson). While my primary motivation during the fellowship was to hone my writing and get out of my own little scientific niche, if any of my stories inspired someone to read an original research paper or do some citizen science, I would consider my work with the Mass Media Program a success.

If any BSR readers are feeling the call to action, they are in luck, as Berkeley has an excellent track record in fielding Mass Media fellows. Former BSR editor-in-chief Rachel Bernstein, for example, spent her 2010 fellowship at the Los Angeles Times. She found that contextualizing scientific results—often the outcome of years of work—for a general audience is one of the biggest challenges in the 24-hour news cycle. “Science isn’t like sports or politics; there aren’t daily events that can be reported on and speculated about,” said Bernstein.

Instead, with science journalism, you have to artfully weave together community relevance and timeliness with previous and ongoing research. At a general interest newspaper serving a large urban area, Bernstein says, it is never enough to let the science speak for itself: “The stories were generally very application-driven,” with relevance to health or daily life. At the Journal Sentinel, I also found myself selecting for stories with local or health angles, often following the journal publication schedules by reporting on papers just being released. “The publication date makes it timely, but as scientists, we all know that the work was actually completed long before the paper finally made it to publication,” said Bernstein. One of her biggest hits—a front page story on local HIV research—went beyond the press release, creating a more thorough and compelling read than if she had just stuck to the published results.

She also realized that, as scientists, our instincts may sometimes be off: “Things that seem the most interesting to me don’t actually have that much of an impact [to the general audience], and sometimes the studies that interest readers are just painfully boring or esoteric [to me]. When it comes to reporting on science in the lay press, it seems that it’s the ‘what’ that is important, and the ‘how’ doesn’t really matter.” The Mass Media fellowship can thus be an experience in shifting your perspectives, as well as in writing.

Like Bernstein’s PhD advisor, mine was aware that I had strengths and interests beyond the lab, and she fully endorsed my leave of absence (your mileage may vary with your own advisor). Some Berkeley alums have transitioned into careers in science writing and communication—you can find 2005 Mass Media fellow Kaspar Mossman serving as director of communications at QB3, and Bernstein works as an editor at PLOS—while others have chosen to keep pursuing research. Whatever their paths, no doubt the fellows carry with them skills that help demystify the lab bench and make science accessible, whether they are performing it or reporting on it.

At the newspaper, my own daily mission to demystify usually started with reading an upcoming research paper. Since I’m not an expert in genetics or engineering, I was often approaching these papers from the position of the newspaper reader who has little to no background. My goal was to gain a thorough understanding of the experiment and its results in a very short time, procure some compelling quotes from the author and an outside expert, and get the reader hooked in the nut graph – the early part of the story that explains its news value and convinces you to keep reading. One of the main lessons of the Mass Media Program is that scientists and non-scientists communicate in fundamentally different ways: the former present background, justifications, and methods before even arriving at the results or the bottom line, which is what the latter want to hear about first. This inverted pyramid structure requires a shift from what scientists are used to, but also allows for the injection of some levity (“The nose knows, at least in fish”).

Besides changes in communication style, the novice science writer also experiences extreme acceleration. The pace in the newsroom is anything but slow, and can be a welcome change for anyone who has ever felt frustrated by the glacial speed of research. The immediacy of the print news cycle gives you the satisfaction of seeing concrete results on a daily basis. Unlike working in the lab, you may even get to leave the windowless newsroom and venture into the outside world, all in the name of science. One of my more exotic (and stickier) experiences came when I interviewed a local beekeeper. Little did I realize as I donned some protective gear that I would be learning more than anyone would ever want to know about hive structure and bee behavior, all while standing in the sweltering heat in a cloud of bees. No sting, no foul, though! The story on bees gained some great color and atmosphere from my interview that day, and I walked away with the best honey I have ever tasted.

Savoring the thrill of being published was also a major departure from the average graduate student experience. While I’m sure I never reached a massive readership (though one of my stories got about 4,000 page views online!), most of the responses to my stories were positive. If people can see how basic research is applicable to their own lives, or are inspired by audacious efforts to explore new worlds, they may be more willing to take action to defend science, for example by calling their representatives when funding is threatened. The Mass Media program’s greatest impact is at the grassroots level, where science converts are created one at a time through conversations between scientists and readers and listeners. Even if most graduate students, at Berkeley and beyond, are never going to become professional science communicators, we would all do well to talk about our work to family, neighbors, or policy makers. If ever there was a time to be boldly vocal about science, it is now.

From the Editor Previous
Strange Fruit Next 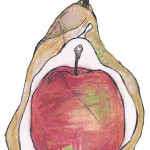