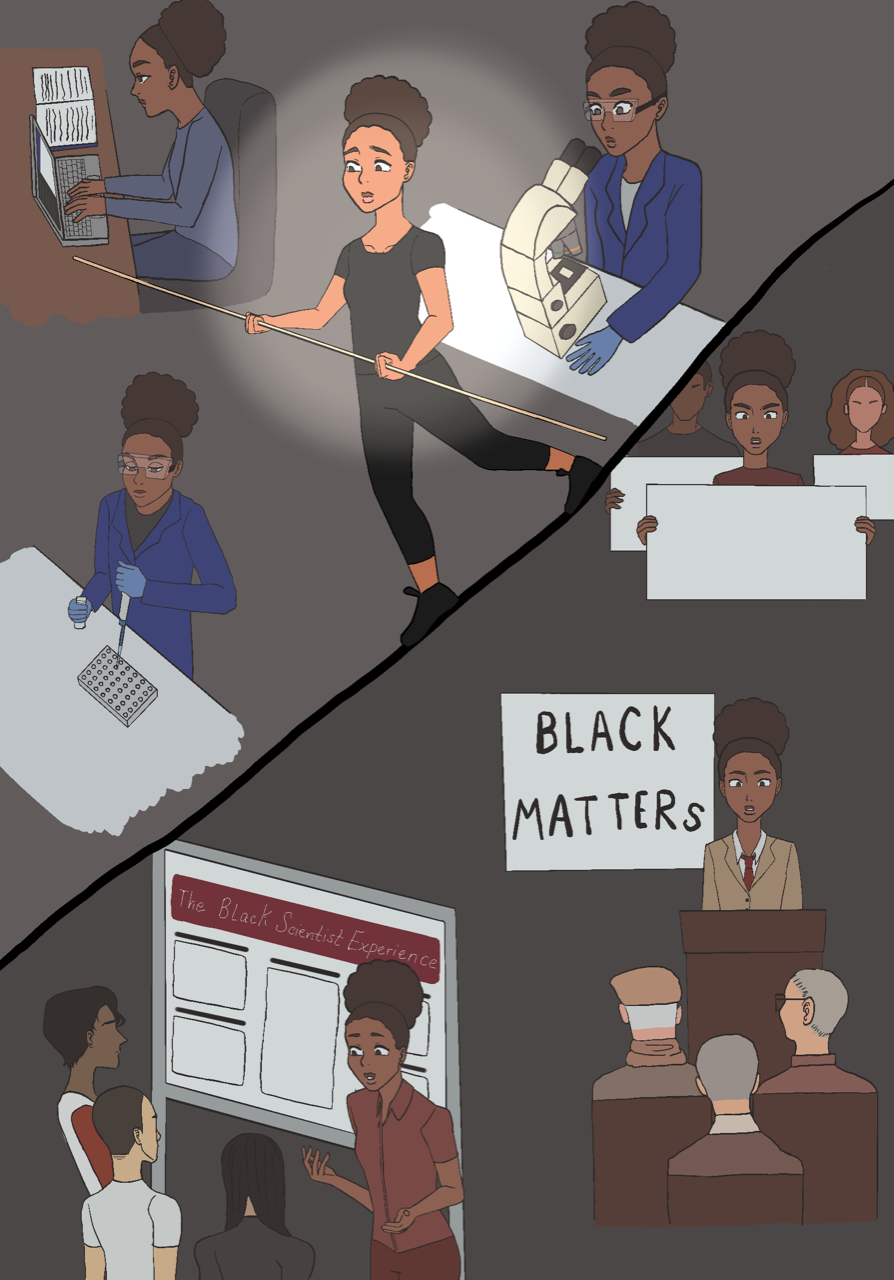 Upon matriculation to UC Berkeley, neither Valeria King nor Khansaa Maar expected, nor wanted, their Molecular and Cell Biology (MCB) doctoral studies to require racial justice activism. They had hoped that Berkeley would let them focus on their research. However, in the course of their graduate studies both students discovered that Berkeley’s progressive reputation comes up short, especially with regards to its treatment of Black scientists. Amidst their lived experiences of scientific racism in MCB in spite of existing diversity, equity, and inclusion (DEI) efforts, Khansaa and Valeria feel that holding the institution to its promises is a requisite for their safety and that of their peers.

Valeria’s four years as a doctoral trainee in MCB mirror the racist experiences she has dealt with her entire life. Rotations and retreats in her first year were “traumatizing” due to her immense isolation as a Black woman. “The students and the professors just seemed to disregard me,” she remembers of her first MCB class, “nobody seemed to understand (...) or even acknowledge that I was Black. The only Black student in my class.” Meanwhile, in contrast, ignorant remarks from peers and targeted interrogations of her intelligence from faculty signaled that she was unwelcome precisely because she was Black. Even earned accolades like nomination for MCB Graduate Affairs Officer positions felt disingenuous. No one knew Valeria well enough to truly advocate for her, so the nomination was tinged with tokenism and also the pressure to take on added work. She was “under a microscope and invisible.” Valeria sought comfort in her thesis lab and kept her head down to escape unwanted attention, in a similar fashion to the other few Black students in upper years. She learned that to survive at this institution, “you leave your Blackness at the door.” Eventually, in an urgent effort to make change in the wake of the murder of George Floyd, Valeria volunteered for the MCB Admissions Committee and fought to recruit more minority students. A record six Black students enrolled in 2021. She hoped the victory would signal that Berkeley might now be taking tangible steps for a safer environment for Black scientists.

The exact opposite proved true for Khansaa Maar, one of the recruits. In her brief time at Berkeley, she has already been the target of racial harassment, such as having her hair touched without her consent by faculty and her presence in a lab repeatedly questioned by staff who assumed she didn't belong. Khansaa considered leaving the program after realizing how pervasive the racism was at Berkeley. “I didn’t expect to be here talking about safety from campus police and working under faculty that cite Jim Watson and theories of scientific racism with no disclaimer,” Khansaa recounts. It especially frustrates her when “people act surprised” by this reality. “This is not ignorance,” she claims, “it’s acting, guarding privilege.” This power imbalance feels raw for Khansaa, whose upbringing in Sudan meant she “didn’t have any coping skills with racism” in the U.S. before moving here for college. “I expected it to be different,” she laments about graduate school, “but the moment I got here, it became apparent that science is not made for Black folks: staff, students, faculty.”

Khansaa’s negative experiences have compelled her to speak up. For her first MCB research presentation, she chose instead to present on the experience of Black scientists. She has teamed up with Valeria to tackle racism through policy change and spreading awareness, and the pair has already led the department’s first Black History Month celebration. Their schedule is packed with meetings negotiating policy and cultural change with Berkeley administrators. Paradoxically, however, the fact that Khansaa and Valeria feel they must divert energy from their biology research reinforces the inequity itself. “I’m not a politician. I’m a scientist. And I’m saying this about my people: energy is always being taken from us,” Khansaa comments, “I’m not supposed to beg for help, things should already be set in place for my safety.” Khansaa and Valeria grapple continually with juggling the research they came here to do and the activism that they wished were not so crucial for their survival in academia.

One of their biggest challenges is theoretical support from the department without meaningful, institution-wide results. Khansaa and Valeria receive genuine support from some faculty members, but the overwhelming burden on such few allies makes it impossible to change a community immobilized by complacency. And, while most everybody at a stereotypically progressive school like Berkeley is quick to extend verbal support, the lack of tangible collective follow-through leaves each new Black scientist as tired and hopeless as those who fought before. Khansaa sympathizes with and venerates scientists like tyrone hayes, who, as Berkeley’s only Black tenured Life Science faculty, is exhausted from decades of scientific racism and “taking all that beating, whipping.” She asserts, “he has scars on his back and we’re still bleeding.”

The scarcity of Black faculty and the coinciding exclusion reveal institutional shortcomings which deter Black students from continuing in academia. “The situation is dire,” Valeria states, “currently, there are no consequences for words and actions that have crushed students.” Indeed, while Title IX exists to address sexual harrassment, there is no similar framework for racial harassment. To this end, part of Valeria and Khansaa’s efforts include planning a round table with Berkeley faculty, students and national science funding agencies to brainstorm action items. “We need an accountability system for racial harassment that is serious and has real repercussions; suspensions, trainings, probations, something tangible for offenders,” Valeria says of the need for policy. She speaks about the openness she wants for this meeting: “We don’t have all the answers, but we want an experimental ground, we wanna hear white and Black people, because white people are scared and frozen into inaction.” Khansaa also urges white people to realize that involvement should not be a choice. “You shouldn’t need passion to support Black folks – it should be institutionalized,” she emphasizes, “If you’re white, I feel threatened. You have to use your privilege. It’s your duty; if you have rights, you have duty.”

At minimum, Khansaa and Valeria call upon scientists to educate themselves. Valeria asks: “How can you work in education and not be educated? To not take responsibility for your ignorance is to uphold white supremacy, enact violence.” She emphasizes, “teachers need to know better because students follow their lead.” Learning and disseminating anti-racist science is especially paramount since racist science has and continues to influence common thought. Khansaa recounts a study from the 1800s whose author burned and mutilated Black people such as John Brown in order to falsely claim that they don’t feel pain in the same way as white people. She asserts that today, after centuries of scientific racism, “if a white person versus a Black person comes to the ER with a broken hand, the treatment will be different. (...) That’s the power of science.” A deficit in social awareness has no place in a profession that values knowledge, nor in an atmosphere with the potential for such pervasive violence. Valeria stresses that, “in order to move forward, we need the moral needle to move too.” For instance, the advancement of CRISPR gene editing necessitates urgent ethical considerations. Valeria believes, “scientists aren’t ready for a tool like this while the community wielding this power has yet to fully consider all people and collect data equitably around the world.” It is known that targets for gene editing can vary among ethnic groups, for instance, and such considerations ought to be treated attentively given the history of abuse towards different races. Valeria urges, “we have to break the cycle with intention.”

That intent begins with giving a voice and platform to Black science. Amidst their many initiatives, Valeria and Khansaa are filming a documentary similar to Picture a Scientist, which informs about the hardship of women in science. Valeria elaborates that with this film, BLACK MATTERs, they “want to raise awareness, bring different aspects of racial science issues to life – the impact on science and humans.” In tandem, they are collaborating with other Life Science graduate students to plan and host iBio, a conference centered on DEI efforts in the sciences. This year’s theme was “Anti-blackness in STEM: moving past inclusion toward belonging.” Readers wanting to help BLACK MATTERs may also sign this letter supporting the need for its production.

Valeria and Khansaa urge the institution to change curricula towards equity. This specifically includes citing Black scientists and collaborating with Historically Black Colleges and Universities (HBCUs). For Valeria, “science ought to be: 1. Raw pursuit of knowledge (...) or 2. Advancement of humanity.” However, she can see that “bureaucracy and prestige drive science” at the moment due to disproportionate attention towards the lucrative Ivy League and Silicon Valley. Thus, neither of those goals are met. Khansaa, too, aspires to recenter academia. She harbors both “genuine fear for the future of science education [and] a desire to snatch depth of knowledge and enlightenment away from bureaucratic systems.” The pair understand the gravity of their mission, but they remain determined. “This is a problem that has a solution. I want to do my part to find it -- the future of science research and education depends on it.” Valeria comments. Khansaa shares her passion for this collective initiative. “As deep as knowledge and freedom go, this is one thing I can do better for people like me,” she affirms: “knowledge frees.”