Atoms at the eve of the universe

Uncovering the genesis of the periodic table 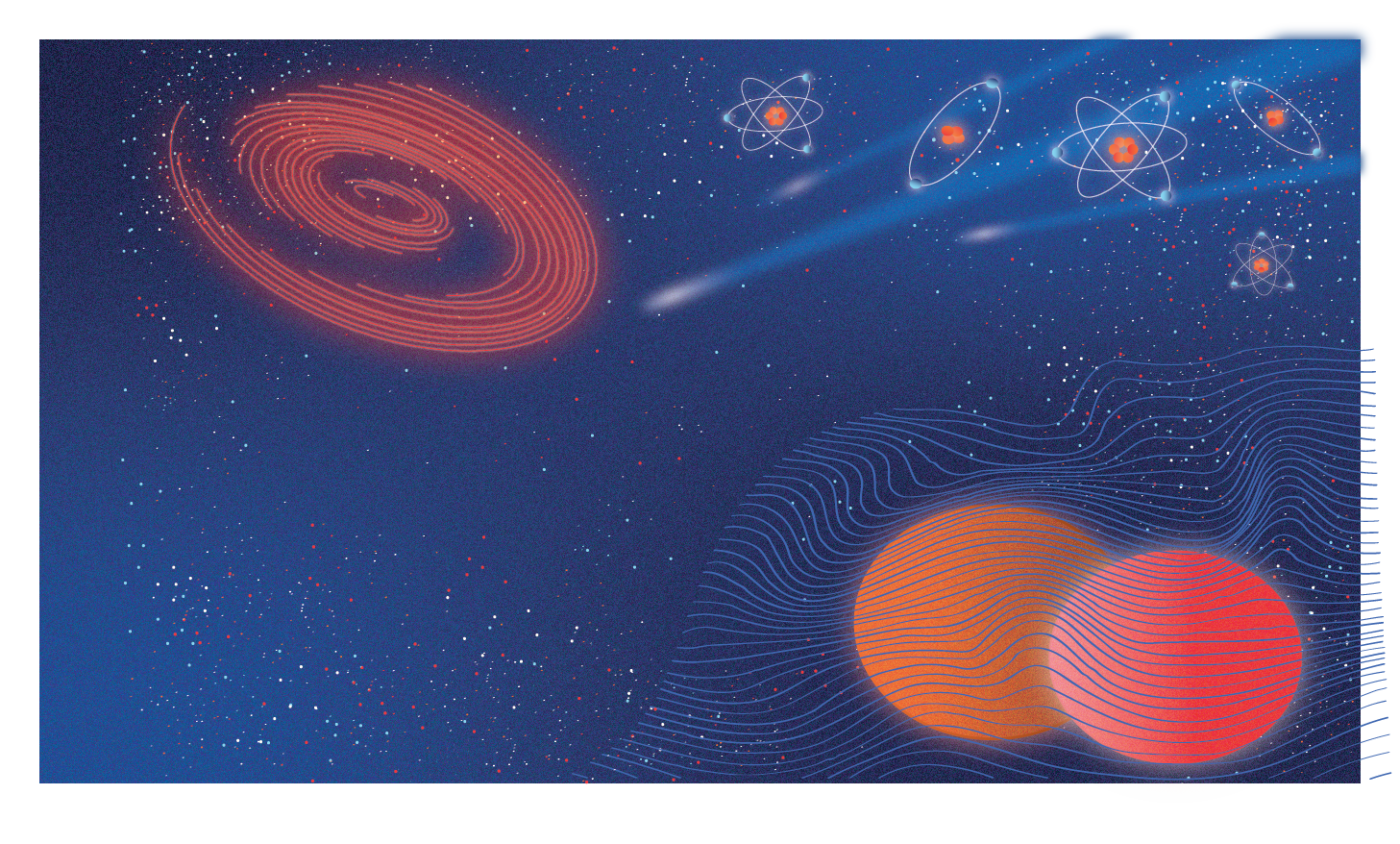 Atoms make up everything around us, from the carbon in our cells to the oxygen that we breathe. Each one of them has an origin story, predating us by billions of years. Some elements, like carbon and oxygen, were formed when lighter elements fused together in stars long ago. Others formed because of more exotic events, such as the Big Bang or merging neutron stars. Nucleosynthesis is the field in which scientists deduce how each element on the periodic table grew into its population that we observe today. At UC Berkeley, this research has a home at the Network for Neutrinos, Nuclear Astrophysics, and Symmetries (N3AS), an international collaboration headquartered here on-campus. N3AS researchers focus on two facets of nucleosynthesis: Big Bang Nucleosynthesis (BBN) and the rapid neutron capture process (r-process).

BBN focuses on what the universe looked like immediately after the Big Bang; a hypothesized event that describes how the universe grew from a tiny, dense object into its vast cosmic structure. The very early universe was a complex and unstable setting; “you have gravity, the universe is expanding, … electromagnetic plasma, weak interactions with neutrinos, … strong interactions between neutrons and protons'' explains Evan Grohs, a 2017 fellow at N3AS and current assistant research professor at North Carolina State University. This primordial cloud of gas expanded and cooled, which allowed subatomic structures to form and survive. “You get to a point where neutrons and protons (subatomic particles) can form,” remarks Grohs, “they’re totally stable.” These particles then came together to form isotopes of the three lightest elements: hydrogen, helium, and lithium.

At N3AS, BBN researchers formulate hypotheses about the early universe to predict how the lightest elements were produced after the Big Bang. Once a prediction is made, it can be compared to data collected by astronomers. Discrepancies between predictions and observations can often be resolved by refining hypotheses, which sheds light on the true nature of the Big Bang. Parts of this program have been successful—predictions and observations for hydrogen and helium are spot on, but “lithium actually doesn’t agree [with the predicted amounts] … that’s called the lithium problem,” comments Grohs. Disagreements like this, which have not been resolved despite countless attempts, demonstrate that our understanding of the Big Bang is probably missing a key ingredient. Historically, solutions to these problems often lead to revolutionary insights, which allow us to venture further in the universe’s earliest moments.

On the opposite end of the periodic table are the heavier elements, such as gold and platinum, which are too heavy to form have right after the Big Bang or through fusion in ordinary stars. For decades, physicists argued that these elements can form when a clump of protons and neutrons absorb an isolated neutron that passes by. When the absorption occurs rapidly it is called the r-process, and the result is a heavy, radioactive nucleus. Despite general acceptance of this theory by physicists, definitively observing the r-process in nature proved to be challenging.

In 2017, scientists observed a signal sourced by a “neutron star merger event,” explains N3AS senior investigator and UC Berkeley physics professor Dan Kasen. Two neutron stars, extremely dense clouds of neutrons that are left behind when massive stars die, somehow ran into each other. When they collided, the neutron stars spewed plumes of debris into outer space, which “gave off this radioactive glow for days and weeks afterwards,” illustrates Kasen.

Finding the faint afterglow from the neutron star merger in the night sky is like finding a needle in a haystack. In addition, the collision also radiates gravitational waves, ripples in the fabric of spacetime that were observed for the very first time in September 2015. Remarkably, gravitational waves can be detected without knowing the event’s location beforehand. One can then use the signal to triangulate the source’s location. This allows astronomers to orient telescopes towards the event and deduce what is inside the debris. Together with his collaborators, Kasen demonstrated that this faint glow had the unique signature of fresh gold and platinum, which formed when clumps of matter in the debris absorbed loose neutrons after the merger. This was the first time that scientists had direct evidence for the r-process, “it’s the thing we were dreaming about for a decade,” remembers Kasen.

This exciting and novel method for studying the r-process is only one of the many discoveries that await N3AS. There, teams of scientists from a variety of scientific fields come together and collaborate—working towards insights into the lithium problem, methods to extract new information from the next neutron star merger, and other questions that shroud our mysterious universe. There is no doubt that this collaboration will shed light and reveal many unknowns behind nucleosynthesis and our vast universe’s elusive history.

Malcolm Lazarow is a graduate student in physics