By Olivia Teter and Andrew Saintsing

By Olivia Teter and Andrew Saintsing 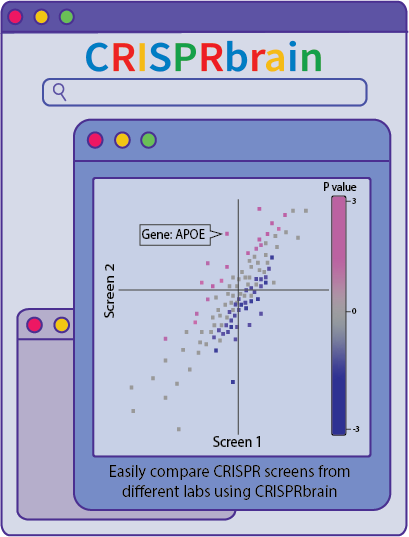 There are over 20,000 genes in the human genome, and the functions of many of them are not yet understood. Advances in genome sequencing technology have revealed correlations between genes and diseases, but successful therapeutics require knowledge of a problematic gene’s function. To address this gap, scientists mutate genes one at a time and check how cells respond. In recent years, CRISPR technology has greatly facilitated this process. Biologists use CRISPR screens to generate huge amounts of data on genes that regulate cancer cell proliferation, neurodegeneration, immune cell responsivity, and viral entry. Still, the sheer scale of available data makes understanding and sharing these CRISPR screen data sets a daunting challenge.

Dr. Martin Kampmann, a UCSF professor in biochemistry and biophysics, and Dr. Faraz Faghri, a collaborating computer scientist at the NIH Center for Alzheimer’s and Related Dementias from Data Tecnica International, recognized CRISPR screen data proliferation as a growing problem. “We realized that there is going to be a major problem as more people are generating the same data,” remarked Dr. Faghri. After initially planning how to visualize a CRISPR screen data set so that other researchers could access and interact with it, they quickly recognized the potential for a larger, more exciting project. Thus, in 2020, they launched CRISPRbrain, an online data commons for CRISPR screen data with features that bridge biology and data science.

Dr. Faghri exaplains, “We sat down and planned what a platform should look like in a way that would be scalable and provide value to … the biologist.” CRISPRbrain offers an intuitive interface to visualize, explore, and cross-compare data sets without needing a bioinformatics background. Scientists can easily upload and explore their own data or search and compare across the repository of CRISPR screens for a particular cell type, cell function, or gene. CRISPRbrain facilitates biological exploration and adds confidence to biological findings when they emerge from multiple studies. Looking to the future, Drs. Kampmann and Faghri, alongside the rest of the CRISPRbrain team, plan to accommodate microscopy data, integrate machine learning algorithms, and add features for data scientists to access biological concepts and definitions in their queries.

Ultimately, CRISPRbrain may facilitate much more rapid development of therapeutics. For instance, Kampmann and his lab have the expertise and equipment to determine a gene’s role in the nervous system. They could use the information they gather to propose interventions for Alzheimer’s and other neurodegenerative diseases. However, these same genes that affect the nervous system are present throughout the rest of the body. A therapeutic for Alzheimer’s disease that targets a particular gene could have wide-ranging and unintended consequences for a living patient. While investigating all the risks associated with a potential therapeutic is essential, it often requires the work of many research groups with different areas of expertise. CRISPRbrain offers a platform that connects those groups to push each other forward in developing novel, exciting therapeutic discoveries.

Olivia Teter is a graduate student in bioengineering