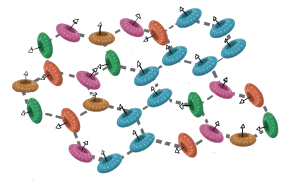 Although computer chips have been getting exponentially faster as the decades go by, we’re fast approaching a fundamental limit on how many transistors, or microscopic switches, we can fit onto a chip. Scientists may be able to bypass this limit by replacing transistors with a new kind of switch: a “spintronic” switch. These devices rely on a quantum property called spin to toggle between on and off.

Even though electrons don’t spin in the same way a top does, they do have a fixed amount of rotational momentum, which physicists call spin. The amount of spin can’t be increased or decreased; only the orientation of the “rotation axis” can change. In a spintronic switch, the collective orientations of many spins can form two types of organized patterns which affect the material’s electrical conductivity, and therefore whether the switch is on or off. Unfortunately, it takes energy to coax all the spins to reorient between the two states. On top of that, the organized spins quickly decay back into randomness.

But recently, a research group led by UC Berkeley Professor of Physics James Analytis made a breakthrough: by using a compound with chemical imperfections, such as stray atoms of other elements, the quality of the switch increased dramatically. The imperfections ruin the crystalline symmetry of the electronic spins, causing the spins to lock to each other like a jigsaw puzzle. As a result, the spins can’t reorient individually, so they’re forced to move in tandem. This remarkable discovery makes the switch stable against random decay and reduces energy consumption by a factor of 100. As it becomes increasingly viable, researchers worldwide are eager to discover novel applications of this exciting new technology.

Dhruva Karkada is a graduate student in physics