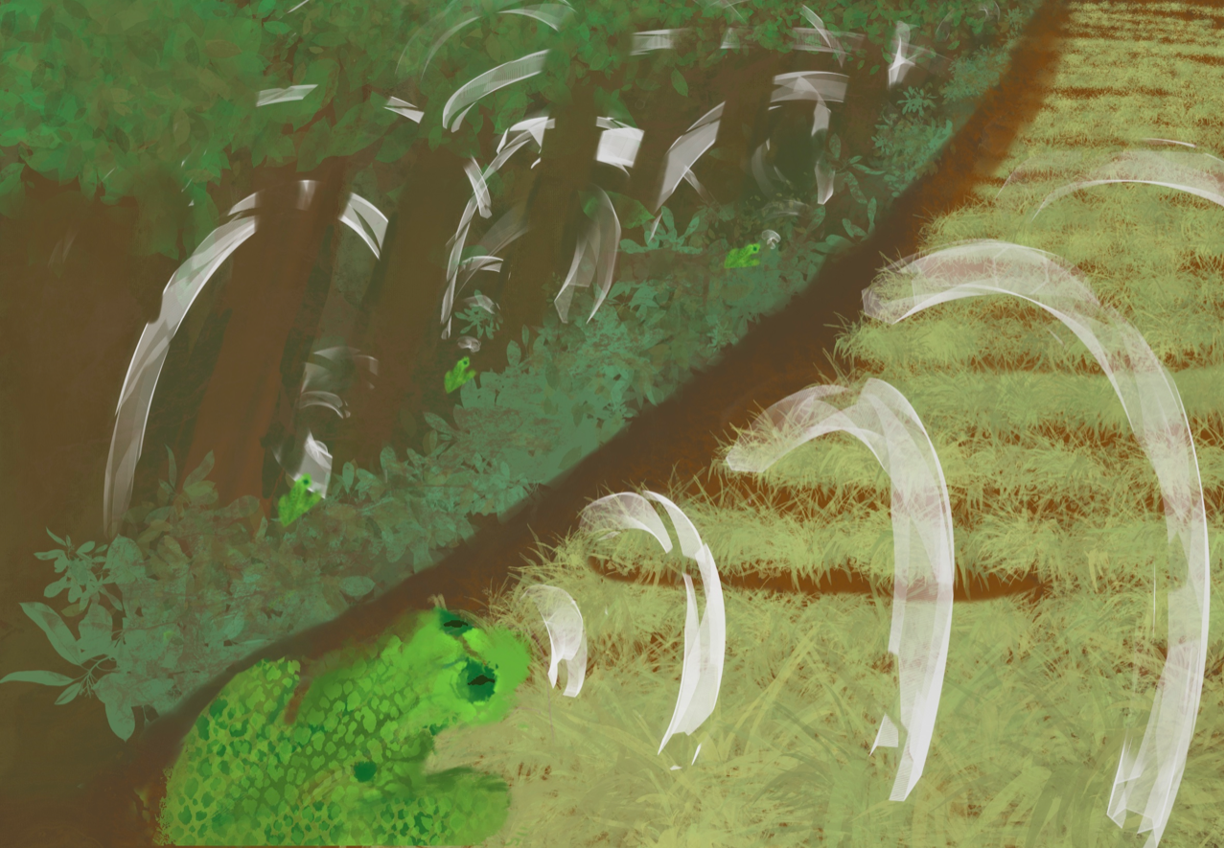 As a child, Becca Brunner’s idea of a good time was copying encyclopedia entries on animals into her notebook. She had no idea back then that “ecologist” was a possible career choice. She was always fascinated by animals, but one particular kind was especially exciting to her.

“I’ve always loved frogs,’ she said. “If you didn’t know what to get me as a gift when I was a kid, you got me something frog related.”

Now 34, Brunner is a herpetologist (an expert in frogs and amphibians) and a PhD candidate at the University of California, Berkeley in the Department of Environmental Science, Policy, & Management.

Brunner’s research is based in Ecuador, where she studies local frog populations to determine which traits cause frogs to thrive or struggle when faced with habitat disturbances. Specifically, she examines if forest fragmentation due to agriculture is a barrier to frog breeding. In order to avoid inbreeding, frog populations must introduce new genes from other populations to increase their genetic diversity. Genetic diversity is important because it proves a greater chance for resilient traits to develop–traits that may help an individual avoid predators or obtain food more effectively, for example.

One way Brunner determines if frogs are traveling to breed is by examining mitochondrial DNA, which is found in the mitochondria and is inherited from an individual's mother. This kind of DNA is commonly used in population genetics studies because it has a high variability and is less likely to have genetic changes due to natural selection. Using this genetic information, she can determine how closely-related various frog populations are in a given area. If the data shows that frogs from geographically distinct populations are related, then the members of those populations must be traveling across the intervening distance to breed with one another and exchange genes. Distances that frogs travel to breed vary, even within one species; for example, the common toad may travel anywhere from 5 meters to 5 kilometers to breed.

“If you are small, traveling even a few meters takes energy,” Brunner said.

Using population genetics to understand a species and its behavior is not a new technique. However, Brunner has expanded on this traditional method of analysis and taken her research to a new level by using an additional source of information: soundwaves.

Most male frogs use mating calls to attract a female. The calls are coded with information about the male frog’s health and vitality; for example, a bigger frog usually makes lower frequency calls. The female will hear and interpret the call and pick a mate, usually choosing the biggest male she can find.

But there is another important aspect to whether a male frog is successful in calling a mate: the environmental soundscape. In ecology, a soundscape is defined as all the sounds that come from an ecosystem. Each landscape has unique physical structures that influence the way soundwaves travel through the environment. A higher-frequency call needs a denser environment to travel, because high-frequency sound is more susceptible to attenuation (the weakening of a signal or current over a distance). Additionally, having more objects for a soundwave to bounce off of may help the higher-frequency wave amplify itself through positive (or constructive) interference, in which a soundwave bounces off an object in a way that produces a new wave that mimics the original soundwave. This is beneficial for a frog’s mating call because the peaks and valleys of both soundwaves line up in sync, making the peaks and valleys bigger and making the sound louder.

Because of this, a wide-open, empty space like a crop field may be the death of a mating call. Over time, this could potentially lead to the death of entire populations–or even entire species–by promoting inbreeding.

However, in some cases, a frog’s call may evolve to adapt to the unique soundscape of its natural habitat. Brunner’s work uses one potential example, Orejuela's glass frog, that lives by loud waterfalls in Ecuador and Colombia. It has an unusually high-pitched call compared to its large body size; at three inches long, it is roughly double the size of most glass frog species. Brunner said its call probably evolved to be heard over the sound of the rushing water of the falls, which is generally of a lower frequency than the calls of many frogs. She suggested that the existence of this frog is evidence that traits can evolve due to the soundscape of a species’ environment.

Brunner suggests that over time, if there were glass frogs with low-pitched calls that lived near waterfalls, they either died out because they were unable to call to each other and find mates, or they moved away from the falls in order to find better reproductive success. Either outcome would reinforce the preference among frogs with high-pitched calls for living near waterfalls, and potentially lead to new species of frogs specialized for different acoustic habitats.

This hypothesis is incredibly difficult to test, but the fact that large body size and high call pitch do not necessarily correlate may be evidence of a frog species adapting in response to its acoustic environment. In nature, it is uncommon to find frog species that prefer to live near waterfalls because the environment is usually too loud for them to call to one another, and is also difficult to move around due to the force of the water. This is why Brunner has spent time studying the delicate, see-through Orejuela’s glass frog: It may be a unique example that illustrates a more general strategy for how frogs can adapt to the challenges posed by their habitat’s soundscape.

“That is a super exciting concept to me, that the sound [of a habitat] can actually affect breeding biology,” Brunner said. “My hypothesis was that maybe we don’t find these frog species in agricultural areas, especially pastures, because the sound environment is too different.” Brunner is still analyzing the data she has collected and is hoping to have a draft of her findings prepared this month.

Brunner hopes her research will be applicable to real-world conservation management plans. She suggests that farmers could utilize crops that are more ideal for amplifying the soundwaves produced by calling frogs. Current crops in Ecuador include palm oil, corn, bananas and wheat, which are often monocropped (a farming strategy where a single crop is grown every year on the same plot). The agricultural structure Brunner suggests would resemble a forest: fruits and vegetables for personal sustenance, and coffee and cacao as cash crops, grown underneath native trees. This would help the soundscape of the crop field better mimic the natural acoustic habitat of frogs.

“[Local farmers are] just trying to make ends meet,” she said. “I would love to also have these results turn into something that is a win for biodiversity and local people.”

Brunner’s studies address a key question in conservation and ecology: Why do we find species where we find them, especially in this age of human habitat disturbance? By studying population genetics and changing soundscapes, she hopes to develop a better understanding of how frog breeding patterns are impacted by deforestation. If her hypotheses prove correct, her work may shed new light on how best to improve agricultural practices to help frogs and humans coexist.

Krissy Waite is a graduate student in journalism