From the Field - A tale of two chipmunks 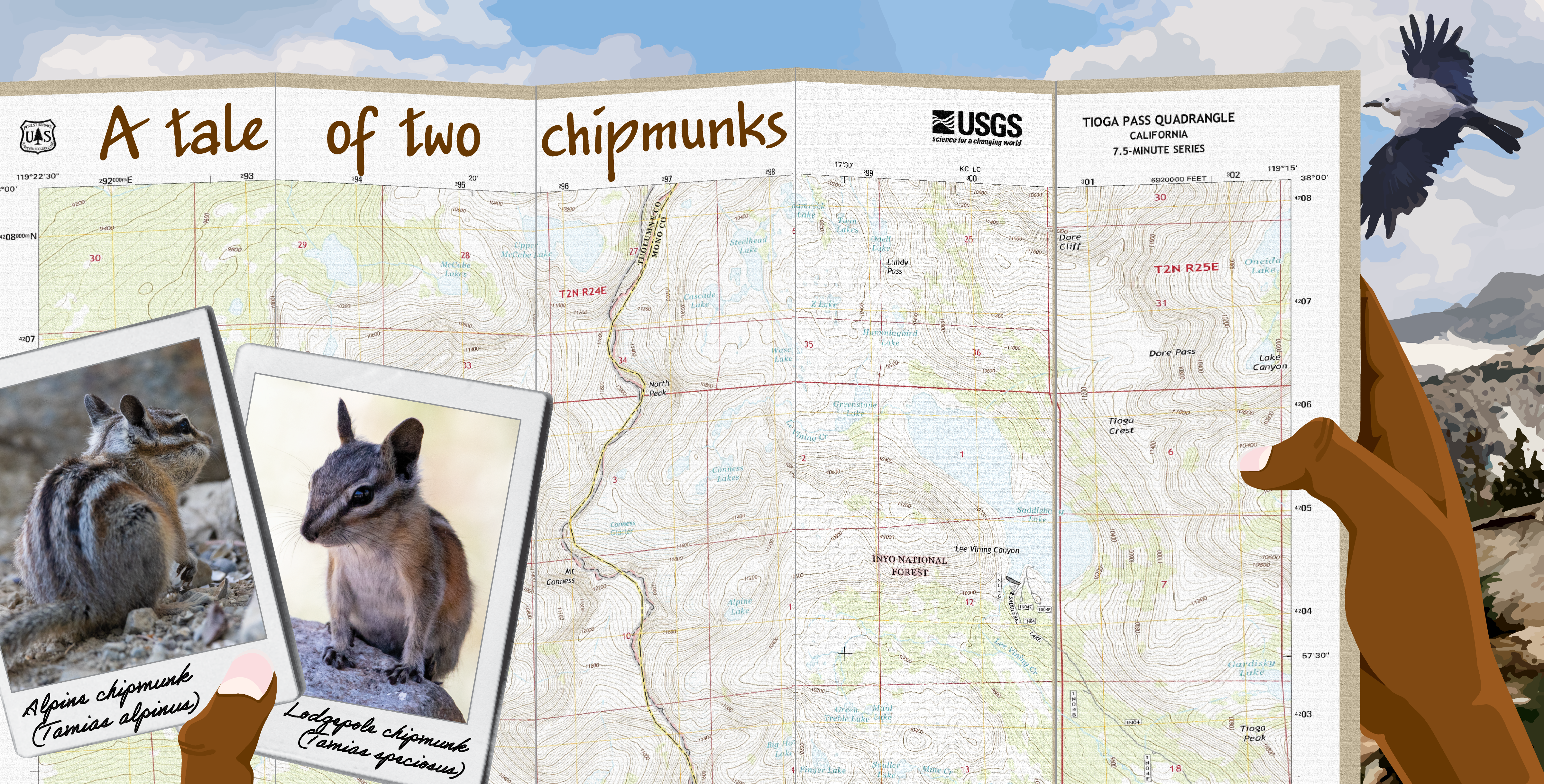 Have you ever heard the call of Clark’s Nutcracker? In the Sierra Nevada mountains of California, this bird’s nasal caw is a ubiquitous fact of life, an obnoxious pronouncement that yes, this specific pine tree does indeed belong to the handsome black, grey, and white bird perched atop its narrow crown. Joining in the chorus, you might hear the piercing alarm call of a concerned yellow-bellied marmot, the melodic song of a foraging flock of white crowned sparrows, or, if you listen closely, the high-pitched cheep of a little chipmunk hiding in the trees or shrubs. For those of us who spend significant time in the wilder parts of the Sierras, these sounds serve as the soundtrack of a unique and truly fascinating ecosystem. I often find myself marveling at how, despite everything, life manages to not only live in such an unforgiving environment, but thrive.

High elevation presents many unique challenges for animals looking to survive in the mountains. Despite a limited growing season, with at most five months of available plant growth, animals must acquire enough food to grow, reproduce, and survive the harsh winter months. How will they adapt their survival strategies as climate change accelerates? And what can their contrasting responses to a changing environment tell us about what’s in store for animal life as our climate continues to warm? These questions draw me to the mountains every summer, where I try to piece together the shared story of two species of chipmunk who call the Sierras home: the lodgepole (Tamias speciosus) and alpine (Tamias alpinus) chipmunk.

Lodgepole and alpine chipmunks are closely related, and their habitats in the eastern Sierra Nevada mountains overlap significantly--I can often observe and capture both species within the same trapping area. The effects of climate change can already be felt here in the mountains; as temperatures continue to warm, summers lengthen and winter snowpack thins out. As a result, the range of alpine chipmunk populations has shrunk over the past century as they move to higher, still-cool elevations, a pattern we see in many other high-elevation species in response to these environmental changes. In contrast, lodgepole chipmunk populations have remained relatively stable over the past century, with lodgepoles still occupying much of their historic elevation range despite the changes to it. By trapping, tagging, and observing these two chipmunks, I hope to learn why such closely related species differ in their response to their shared changing environment.

In many ways, surveying for small mammals has changed very little in the last century. The work day begins just after sunrise, with a cup of coffee and a quick breakfast. We hike along a series of 10-meter by 10-meter grid lines, where at each grid point there is a pair of small, collapsible live traps with a spring-loaded trap door. We bait the traps with a tiny glob of peanut butter–a treat even rodents find irresistible–prop open the door so that it’s ready to snap shut when the sensitive mechanism is triggered, and hike on to the next pair of traps. We repeat this circuit every few hours over the course of the day, in hopes a chipmunk has come to visit one of our baited traps.

If we’re lucky, one of the traps will be closed and a pair of dark, curious eyes will be peering back at us. Once a chipmunk has been captured, I give it a small radio transponder tag for future identification, and collect data including age, sex, and body mass, as well as non-invasive biological samples such as feces for hormonal analysis and a small snip of ear tissue for genetic information. Lastly, I analyze the animal’s behavioral responses to novel environments. I deploy a portable arena, which serves as a field-ready sound stage to film chipmunk behavior. Designed and constructed of PVC piping and plastic sheeting, the arena is an enclosed, standardized environment that is unfamiliar to the animal. Each chipmunk is allowed to acclimate for a time before we place the trap at the entrance to the arena, with the trapdoor wide open to their new stage.

Then, I observe. I want to understand how exploratory behavior differs between the two species of chipmunks. My data show that the lodgepole chipmunks, on average, take significantly less time to enter the arena than alpine chipmunks. Once inside, they are also more active, and more interested in exploring their new surroundings. In other species, increased boldness often correlates with increased survival in new or changing habitats, which complements what we understand so far about these chipmunk species. Bold behavior may make an individual more likely to take risks, and better poised to take advantage of new resources. Indeed, as the climate of their environment has changed, lodgepole chipmunks have not migrated, but rather adapted and explored new survival strategies.

The alpine chipmunks, in contrast, seem to be responding to their changing habitat by further specializing to their high alpine environment. Individuals vary little in their daily activity levels, being active only when temperatures are optimal. This observation coincides with their hesitancy to explore and their more acute physiological stress responses to unpredictable conditions, in comparison to lodgepole chipmunks. My colleagues and I have seen how increased midday temperatures are related to elevated stress-hormone levels in the alpine chipmunk, but not the lodgepole. All of this information implies that the alpine chipmunk’s habitat specialization, in contrast with the lodgepole’s exploration, may be the result of individuals less equipped to cope with suboptimal conditions, and therefore less likely to engage with the unfamiliar.

Climate change is a process that unfolds over generations. But even with my limited time living and working in the mountains, I can see the changing environmental conditions and how acutely it affects these chipmunks. I’ve seen years where snowmelt comes much later than average and animals struggle to find enough food to survive, let alone build up fat stores for winter. Through the lodgepole and alpine chipmunks, we see contrasting approaches to surviving a changing world. While doubling down on a specialty may work in the short-term, the long-term prospects for the survival of the alpine chipmunk are precarious. They may keep moving higher and higher in search of that ideal alpine habitat, but eventually there will be no more mountain left to climb. Maybe the better lessons lie with the lodgepole chipmunk, in flexibility, in resilience, and in making the unfamiliar familiar.

Kwasi Wrensford is a graduate student in integrative biology.