Leaping to a brighter future

A mountain lake is a classic metaphor for serenity—quiet, still, and calm. But in the High Sierra of Sequoia and Kings Canyon National Park (SEKI), a few hours southwest of Berkeley, the most ecologically healthy lakes are hopping with life. The area is home to birds and snakes, many of which feed on a small frog with a raspy call and brightly-colored thighs: the mountain yellow-legged frog, once the most common amphibian in the Sierra Nevada mountains.

Unfortunately, this species is in trouble. Predation and disease have caused the frog population to shrink to a tenth of its original size. The introduction of non-native trout that feed on frogs and invertebrates, has left once-vibrant lakes supporting little else besides gnats and midges. In addition, an insidious fungal disease is rapidly spreading through the frog population. The fungus, Batrachochytrium dendrobatidis (Bd), infects the frogs’ skin and interferes with their ability to breathe and absorb water, often leading to death. Bd is a likely factor in the decline of hundreds of amphibian species worldwide and its presence in mountain yellow-legged frogs is a bad sign. Between Bd and the non-native trout, these frogs are “very much in danger of going to zero,” says Danny Boiano, aquatic ecologist for the National Park Service. Because the frogs were once so plentiful, their loss likely has a profound impact on the ecosystem. Isaac Chellman, environmental scientist for the California Department of Fish and Wildlife, explains that the mountain yellow-legged frogs “eat a lot of different invertebrates, and they are also the food source for other animals, including birds and mammals. Undoubtedly they play an integral role in the food web.”

Although the situation seems dire, researchers and field teams are working hard to save this species, and there are signs of hope. Efforts to remove invasive trout have turned previously inhospitable lakes into prime frog habitats. Lakes in which frogs have been eradicated by Bd could be repopulated by the small fraction of frogs that can persist despite the disease. The process of restoring frogs to empty lakes is most successful when the populations’ genetics are known, since genetically diverse populations are more likely to survive in a new environment. Until recently, though, knowledge of this species’ genetics has been extremely limited. Andrew Rothstein, a UC Berkeley graduate student in the Department of Environmental Science, Policy, and Management, set out to understand the frogs’ population genetics within SEKI, a critical refuge for the species. 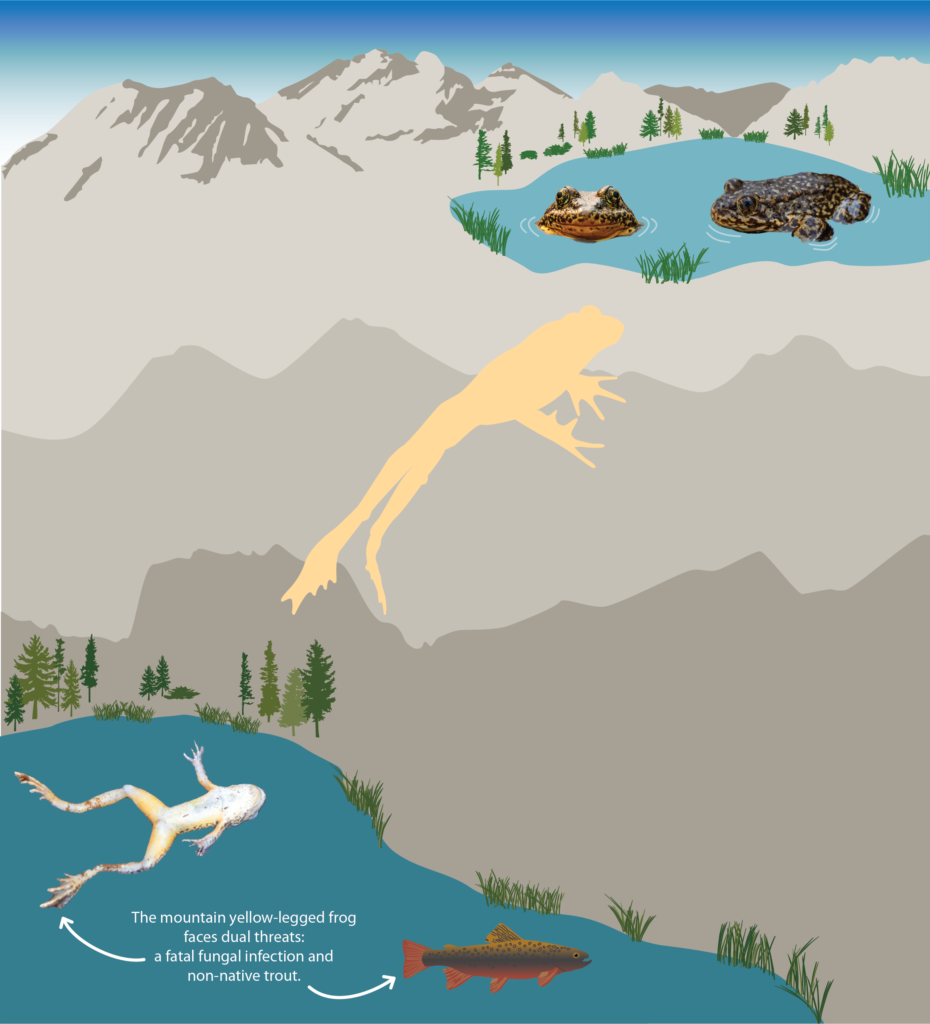 Getting a picture of the population genetics across the park, which is larger than Rhode Island and includes thousands of lakes and ponds, was a daunting task. Luckily, as a conservation researcher, Rothstein was well acquainted with the principle of reuse. Hundreds of archived frog skin swab samples already existed in deep freeze but getting useful information from them was no simple matter. Initially taken to detect the mere presence or absence of Bd fungus, the samples contained relatively low amounts of frog DNA and included contaminants that made DNA sequencing difficult. Inspired by similar work from Thomas Poorten, a previous frog researcher at UC Berkeley, Rothstein made the most of these low-quality samples by focusing on particularly variable regions of the genome.

This unorthodox data collection paid off. By comparing genetic information from frog populations across the park, Rothstein determined which populations were most genetically similar. He also found that populations that had been infected with Bd, which might have been expected to have lost genetic diversity as the population declined, were just as diverse as uninfected populations. “We could use that diversity to preserve [this species] in the future,” Rothstein says. “It’s a bit of shining hope.”

Before Rothstein’s research was even published, conservation teams were using it to guide decisions about restoring frog populations. “This was a piece that we needed,” says Boiano. “When we’re moving frogs around ... we can pick the best source, the closest or most genetically similar source so that we’re being as responsible as possible.” In addition to repopulating lakes with frogs of a similar genetic makeup to the original inhabitants, introducing diverse populations to empty lakes could shift the odds in the frogs’ favor. Frog populations are still in decline, and the fate of the species in SEKI remains very uncertain, but with new information of their population genetics, their future looks a little brighter.