To tackle questions about the influence of nature versus nurture, some neuroscientists ask why our perceptions of the world are so similar. Is it due to how our brains are wired? Or is it contingent upon having similar visual experiences? At UC Berkeley, the Cognitive Neuroanatomy Lab (CNL), led by Dr. Kevin Weiner, links genetics, brain anatomy, and human behavior to quantify the relative importance of genetics and experience in shaping a person.

In a recent study, postdoc Jesse Gomez focused on the ventral visual pathway. This pathway is organized as a functional hierarchy, meaning early areas process smaller, simpler features––like an edge of an object––and later areas combine these simple features to represent larger, more complex objects––like a face. Gomez discovered two distinct sets of genes whose expression correspond to the thickness of brain tissue and the speed at which neurons fire. These changes in cell structure along the pathway contribute to an increase in the amount of visual space neurons process, explaining why we see an increase in functional complexity. 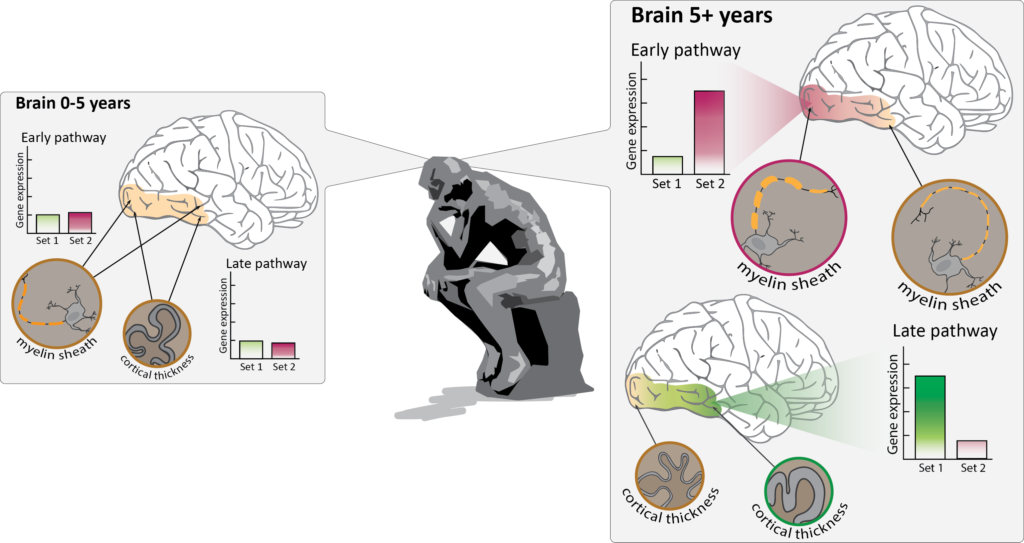 Gomez also explored how gene expression changes across development. He found that adult-like patterns emerge at age five, not at birth. In other words, even though genetics determine aspects of the structure along the pathway, experience also shapes anatomy and, consequently, behavior. By probing the influence of genetics versus development on brain anatomy and function, Dr. Weiner and colleagues have begun to unpack how nature and nurture work together to build a brain.