Electric power can come from unexpected places. Take for instance, lemon batteries. Teachers use them to demonstrate reduction-oxidation reactions—when electrons move from one molecule to another. A lemon battery usually consists of a lemon pierced by a galvanized nail and a copper coin. Zinc from the coating on the galvanized nail dissolves in the lemon’s citric acid and leaves behind electrons. When alligator clips and wiring connect the nail and the coin to form a circuit, the electrons flow through the circuit to the coin where they combine with hydrogen ions to generate hydrogen gas. The current could be used to power a small motor for a miniature car that’s juiced and built to last.

Lemon batteries illustrate how energy can be converted from one form to another and how the flow of electrons between atoms produces mechanical movement. Today’s technology depends on such conversions not only in the batteries that power our electronics, but also in the combustion of carbon-based fuel. Most living cells, including our own, obtain useful energy when electrons flow from food molecules to oxygen molecules. In both metabolism and combustion, carbon dioxide and water are the chemicals left over after the energy is released.

Carbon-based fuel, whether it is food for our bodies or gas for our cars, is incredibly useful because it acts as an energy reservoir. When a solar panel captures energy from the sun and converts it into electricity, the electricity must be used immediately, or it dissipates. In contrast, energy remains stored in the chemical bonds of fuel until the fuel is activated. Its usage presents a major drawback, however, because of the inescapable production of carbon dioxide associated with its combustion. When we dip into buried fossil fuel reservoirs to power our technology, we destabilize the carbon cycle and accelerate climate change. A car that runs on lemons would itself be a lemon, but at least the hydrogen gas it produced wouldn’t contribute to increasingly devastating natural disasters. Although it is ultimately unlikely that citric acid will be part of the solution to climate change, Professor Peidong Yang’s research group may have found an important role for acetic acid, the main component of vinegar. 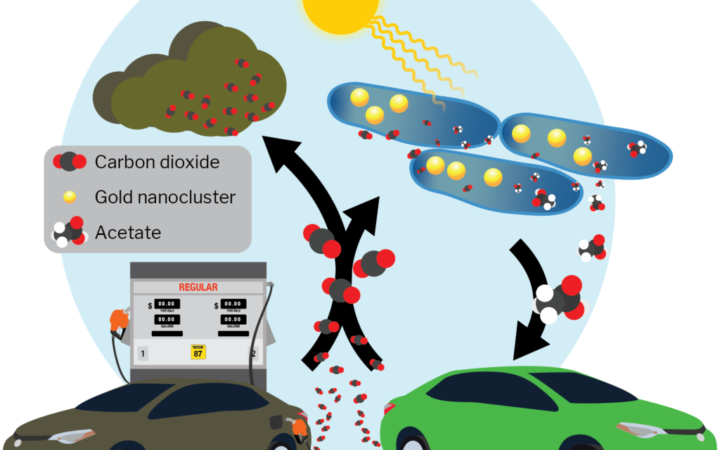 Scientists can readily harvest acetic acid from the bacteria. Concentrated vinegar may not seem that valuable, but with a few modifications, chemists can turn it into fuel. “We can chemically convert acetic acid into ethanol and butanol,” says graduate student Hao Zhang of Yang’s group. “I would be interested in genetically modifying the bacteria so that they themselves synthesize these fuels or even the building blocks for plastic polymers.”

In an effort to regain balance in the carbon cycle, scientists could grow huge colonies of acetogens to act as carbon sinks and fuel sources. If they chose just any acetogen, though, they would likely have to find a way to feed them. “We chose to work with M. thermoacetica because it can consume electrons directly,” says Zhang. If these bacteria do not have access to food, they can harvest energy from electrical current. Yang’s group has taken advantage of the bacteria’s amazing ability by combining them with gold nanoclusters that act as microscopic solar cells within the bacteria themselves. The energy in light excites electrons in the gold nanoclusters and generates a current that proteins in the bacteria can capture and transfer to carbon dioxide. Zhang is confident that this biohybrid system can be scaled up for industrial production. “I think the main issue will be ensuring that all of the bacteria in an industrial-sized tank have access to enough light to be productive, but that is just an engineering problem that can be solved with appropriate setup designs,” she says.

Technological change takes time. Bacterial solar fuel pumps won’t power cities tomorrow, and fossil fuels will remain cheap and accessible. If a scientist told a group of chemistry teachers that they could have renewable lemon batteries in five years, no one would expect the teachers to change their demonstrations in the meantime. There’s always another lemon, and it’s not like they live on the one they have.