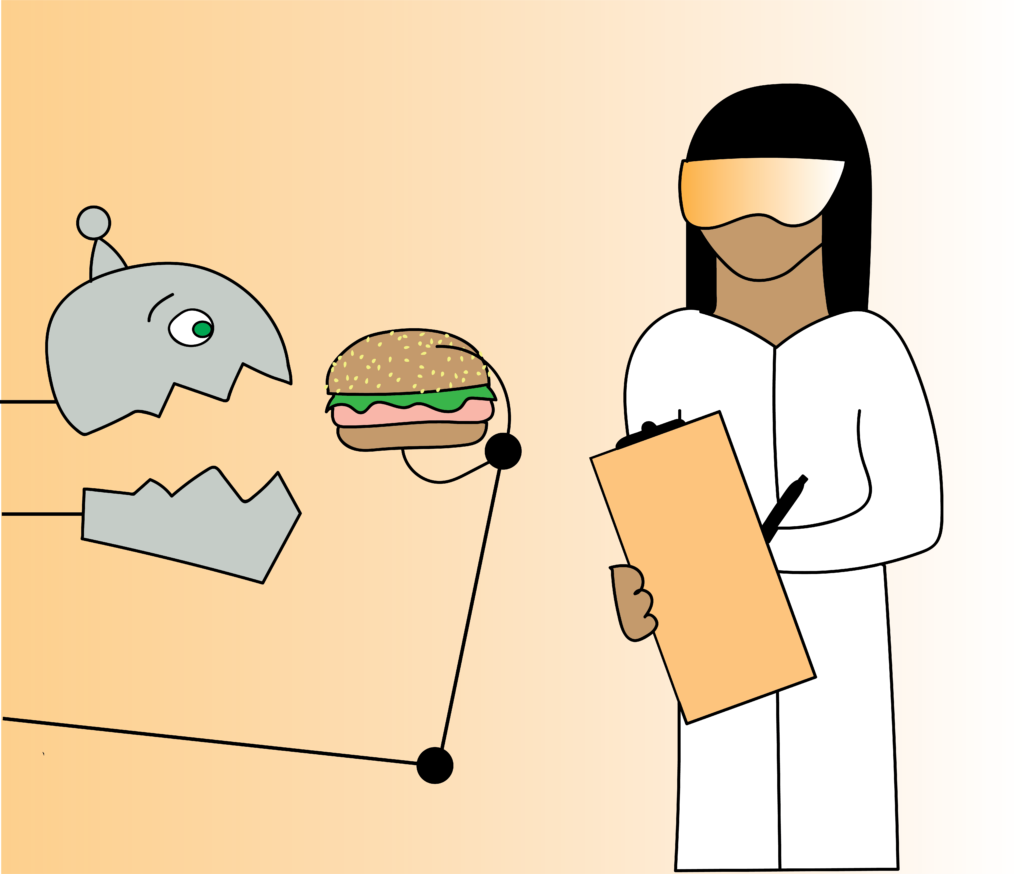 Scientists design non-meat burgers to imitate not only the flavor of salmon, but the feeling of biting into juicy, tender grilled salmon.

Kimberlie Le watches, fascinated, as mechanical jaws chew down over and over again on a juicy salmon burger. She jots down notes about how the meat crumbles and mashes together. Later, she will use data from high-precision instrumentation to see which flavors make up the unique taste of the salmon. All of this work is done to create a perfectly delicious salmon patty that may one day end up on your dinner plate. The catch: this burger is made from fungi rather than meat.

Le and her classmates were inspired to create a meat-free salmon burger after attending the world’s first university-level, semester-long class in developing plant-based foods at UC Berkeley. Researchers including Le at the UC Berkeley Alternatives Meat Laboratory are creating new foods that have the taste, texture, and smell of salmon or beef, but are meat free. Their goal is to make delicious food that takes less water, energy, and time to produce than conventional meat products.

Animal-free meat made from plant and fungal proteins is a growing market, partly driven by consumer curiosity, and partly driven by the ecological benefits of lab-grown meat. Our world population continues to grow and our arable land shrinks due to rising sea levels and encroaching deserts. Unless we find ways to feed ourselves without destroying our environment, there is a real risk of a global food crisis.

From most estimates, by the year 2050, there will be over 10 billion people on Earth. Already, animal agriculture accounts for a quarter of all greenhouse gas, and pound-for-pound, beef is 30 times more environmentally demanding than plant protein. Today, consumers in America eat 56 billion animals per year and, with growing populations, continued demand for animal meat will likely be unsustainable.

“The increasing production and consumption of meat is very resource intensive,” explains Dr. L. Ann Thrupp, the Executive Director of the Berkeley Food Institute. “Large amounts of water, land, and energy are needed per unit of meat produced. That’s a huge impact on the environment.”

“Water pollution, air pollution, soil degradation, erosion—it’s all significant. Any given farm that works toward sustainability has to have environmental responsibility. It’s not easy to get win-win solutions,” says Thrupp.

Interest in alternative meats fueled by more than student interest in sustainability—the US meat market was worth over $1 trillion in 2016, and entrepreneurs and investors are starting to see the potential monetary value of meat-free products. By most estimates, the meat substitutes market is predicted to grow to $20 million in the next 10 years. 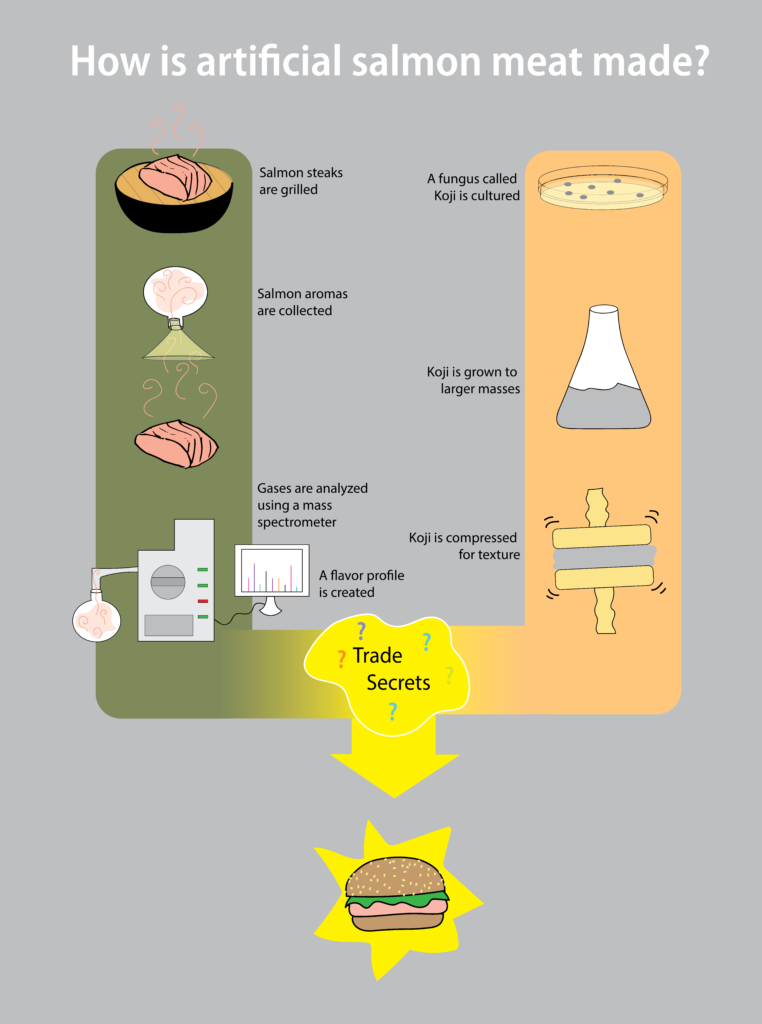 How exactly can a plant taste and feel like animal meat? Three key properties are critical for plant proteins to successfully imitate meat—flavors, smells, and textures. Scientists are working to understand how individual components of foods like fats, proteins, and sugars mesh to form the taste, texture, and aroma profile specific to each type of food.

At its core, these research efforts work to identify the individual components or chemicals that drive each sense. Just like building with Lego blocks, scientists developing seafood made from plants construct a taste profile with the perfect balance between many flavors that work together to taste just like a salmon steak. Similarly, the smells have to be just right in order for us to enjoy food built from plant proteins. Most importantly, the texture has to match the squish, crunch, and smoosh our teeth and jaws feel when munching our favorite foods.

To recreate taste, scientists must understand the composition of each food, isolating each building block of flavor so they can be rebuilt with plant proteins to mimic meat. Each flavor is in fact a specific combination of the taste and smell, which begins with our taste buds reacting to the five basic tastes: sweet, salty, sour, bitter, and savory, also known as umami. Every flavor produces reactions of varying intensities for each of these tastes. This process is surprisingly complex: assuming five basic tastes and 10 levels of intensity, taste buds can detect over 100,000 unique flavors. On top of this, researchers are also exploring four new tastes: fattiness, alkalinity, wateriness, and metallic flavor, which all add to the experience of flavor. By combining each of these individual flavor components with analogs naturally occurring in plants, scientists can recreate the flavor of meat without using the meat itself. For example, researchers have found that metallic taste is important for the perception of meatiness—animal meats possess a metallic iron taste from hemoglobin in animal blood. This flavor is then recreated with the plant version of this protein, called leghemoglobin. With Le’s salmon burger, the salty, savory, and slightly sweet taste of fish meat was recreated by selecting species of algae with the same fishy taste as salmon.

Smell is another important component of taste. Anyone who has tried to taste food while congested knows how much odor influences flavor. The smell of a food, known as its aroma profile, is the molecular recipe formed as foods break down under heat, giving rise to the newly formed compounds that help impart distinctive new flavors. Using precise analytical tools such as gas chromatography, which vaporizes and sorts molecules individually, scientists and engineers can determine the individual chemicals that give rise to an aroma. Researchers can then add chemicals with similar properties to the lab-grown protein to better mimic the flavor and aroma of animal meat.

The final key sense our mouths experience when biting into a burger is texture. Like taste and smell, different meat products possess highly unique textures, so understanding how these foods react to our chewing forces is critical for producing realistic plant-made meat. Scientists have created machines that mechanically chew food and allow them to analyze each of the forces involved in breaking it down into smaller bites. As we chomp down on a piece of meat, it deforms, and the individual meat fibers undergo stress and strain forces. The stress forces compress the fibers, squishing out the juices that carry the flavors, and the strain forces change the shape of the fibers, which molds the food into lumps we can swallow.

Inventors like Le and cofounder Joshua Nixon are using this technology to grow proteins from a species of fungi that smells, tastes, and deforms just like fish meat. The team carefully selected a species of fungus, Aspergillus oryzae, commonly known as Koji.

“The fungus that we grow has a naturally occurring texture that is like meat since the fibers are similar to animal muscle fiber in size,” says Le. “The fungus is high in protein and neutral tasting to start. Then we combine natural flavors and other ingredients like plant-based fats to create meat and seafood-like products.”

The fungus is cultured in a nutrient-rich bath, where it grows the long, stringy filaments that are used to make textured strands of proteins found in meat. This protein-rich base is combined with plant fats for juiciness, starches for chewiness, and flavors ranging from umami to salt to give the lab-grown salmon burger its distinctive flavor and texture. The final product is molded into patties that look and feel like natural fish fillets and are ready to be seared and heated to make a juicy salmon burger. By building foods block by block with flavors and textures made from plants, scientists like Le and Nixon are able to recreate the experience of animal and seafood meats.

Innovating alternatives to meat has been a focus for UC Berkeley since 2011, when Impossible Foods worked with scientists to create the first commercially available meat-free beef burger, which looks, smells, and bleeds like animal meat. Since then, several Bay Area start-ups have developed meat-free foods, including eggs (Just), shrimp (New Wave Foods), and meatballs (Memphis Meats). The meat-free wave has also made its way to UC Berkeley labs and classrooms. Last year UC Berkeley launched the Alternative Meats Lab, which brings together industry experts and various campus laboratories to explore frontiers in so-called fake meat. The Sutardja Center for Entrepreneurship & Technology recently offered a class, the first of its kind, in developing plant-based foods. Based around a practical laboratory class, students work together to engineer the taste, texture, smell, and appearance of meat from a range of plants and fungi to make foods that are as delicious and nutritious as animal meat. The fast-paced class mixes industry leaders in the food development market with UC Berkeley’s students. During the class Le and Nixon came up with the idea of sustainable seafood made from fungi, and have since founded Terramino, creating meat and seafood in a process similar to brewing.

“The Alternative Meats program was difficult because there is a lot of information and problem areas within the alternative meat space to tackle,” Le says. “We had to focus and work with the limited time and resources we had to create first iterations of our products.” 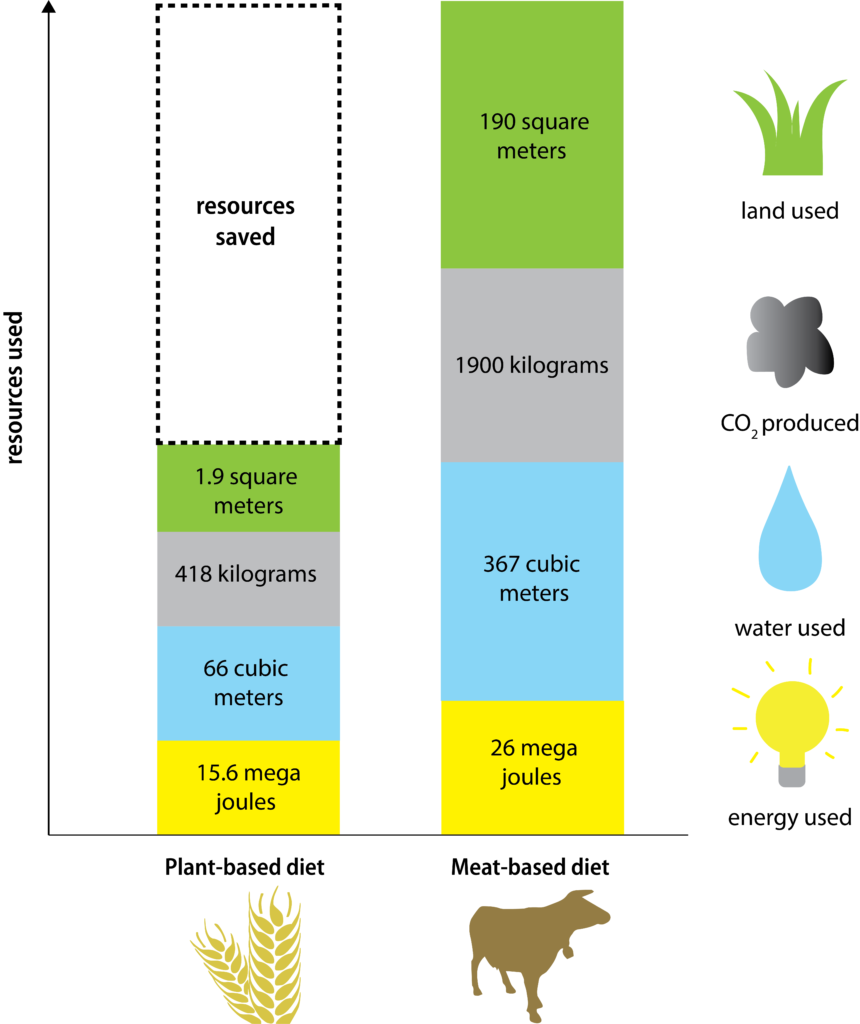 Plant-based or fungi-based diets use up fewer resources than meat-based diets for the same quantity of food produced. As the world's population grows, it will be essential to produce food that requires less land and resources and produces less waste.

While the concept of animal free meat is appealing, there are still some key unanswered questions. For example: Are these foods really more sustainable? With lab-grown meat still a fairly new addition to our menus, it will take time to determine their long-term impact relative to conventional meat. The energy and material inputs required for growing proteins in a laboratory is not trivial. Additionally, the energy and greenhouse gas contributions from transporting these new products to shops and restaurants still have the same impact as animal meat.

“The costs are very high for all the lab equipment, water, and resources needed,” says Thrupp. “I think it’s really important to find out how affordable these products are for people.”

Another potential issue is getting approval for alternative meat substitutes. For example, Impossible Foods has been working with the US Food and Drug Administration (FDA) to get a key ingredient, the meaty-tasting leghemoglobin, approved as safe for consumption. Since the leghemoglobin is made by genetically modified yeast cells, it was considered a new food ingredient and was not listed as safe for human consumption; scientists and consumers alike had concerns about it being a potential allergen.

“These [alternative meat] products should have rigorous regulation,” says Thrupp. “[Alternative meat companies] are putting unknown products into the food system, and I think criteria need to be established about the health and safety impacts.”

The FDA has recently responded to Impossible Foods’ efforts to get leghemoglobin listed as safe for human consumption stating they have “no questions,” approving it as safe to eat. But only time will tell if consumers believe alternative meats are a safe, economical, and sustainable choice.

Finally, it may take time for consumers to become used to the idea of meat without animals. It is also possible that consumers will be averse to plant-based meat, no matter how tasty it proves to be. “A challenge industry-wide will be to educate consumers and deliver a great experience with these new meat products,” says Le.

Looking to the future, as the world population grows, and the strain on global food production becomes more acute, food shortages may become an increasingly common reality in both rural and urban areas. One solution to imminent food shortage needs to involve more sustainable food cultivation practices, and alternative meats could well play a key role. While it may take time for burger fans to widely adopt fungi and plant proteins in place of animal proteins, it’s clear that alternative meats are more than just a fad: they are a tasty path toward a more sustainable future.