Through photosynthesis, plants have been turning solar energy and carbon dioxide (CO22 faster than today’s plants can absorb it, leading to climate change and a dwindling fossil fuel supply. Plants themselves are not that efficient. Most convert less than 1 percent of the available solar energy to chemical form. To re-capture CO2 emissions and ensure energy security, chemists are developing enhanced, artificial photosynthesis to make fuels from CO2 directly.

Photosynthesis requires light energy to split water molecules into protons, electrons, and oxygen. The protons and electrons must then be transferred to CO2, which forms energy-rich hydrocarbons. In recent years, scientists have produced devices that carry out these steps more efficiently than plants, converting up to 10 percent of solar energy into usable fuel.

Meet the photoelectrochemical cell: a positive charge is required to remove negatively charged electrons from water and begin the water splitting process. This charge is provided at a structure called the anode. 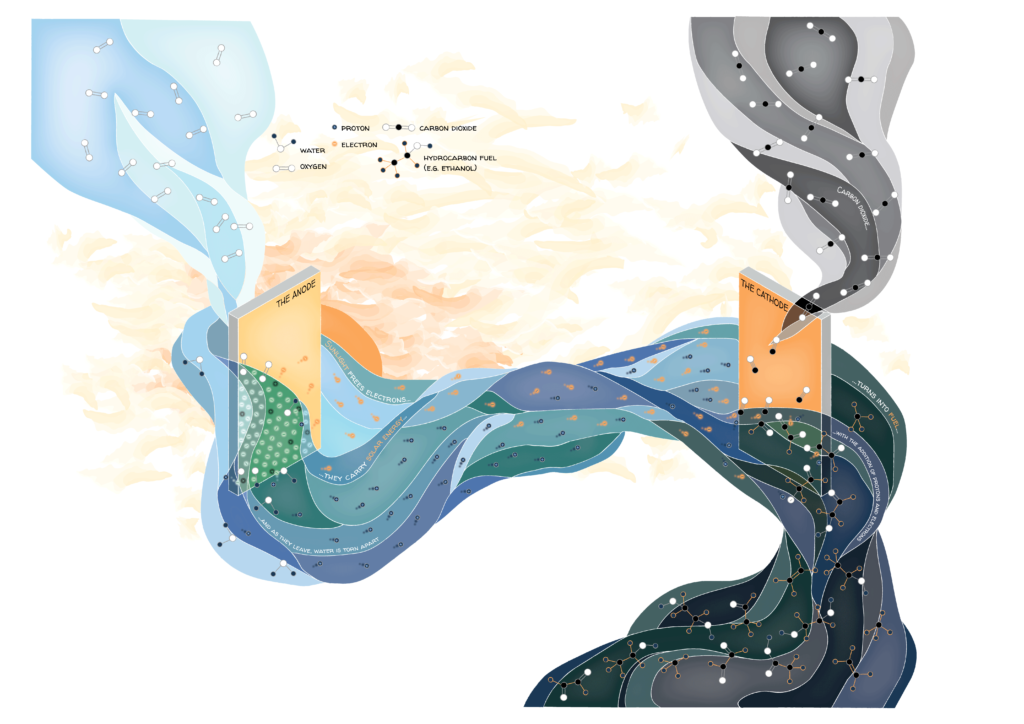 The anode can be made from a semiconductor: a material that can conduct electricity when electrons are given enough energy to move from their ground state in the valence band into empty higher energy states in the conduction band. One can think of the electrons as cars stuck on a busy highway suddenly gaining the ability to fly above the traffic. Light can launch electrons into the high energy state, leaving behind an empty ground state with a positive charge. Electrons from water molecules are left to fill this hole, like traffic merging into the highway from an on-ramp. However, there must be a strong enough positive charge to attract the electrons from water, and electrons must be able to reach the higher energy states using light provided by the sun, which is mostly in the visible energy range from red to violet. These conditions depend on the atomic structure of the semiconductor. Dr. Kristin Persson is one of many scientists working with the Joint Centre for Artificial Photosynthesis (JCAP) to find semiconductors that meet these criteria. “I am on the discovery side, scanning large chemical spaces in the periodic table,” she says; “trying to figure out which needles in the haystack can actually fulfill all those different properties.” She and her colleagues use computational modeling and a high-throughput experimental approach where three elements are combined in every possible ratio in ten percent increments using a modified inkjet printer. In this way, hundreds of compounds have been narrowed down to a few promising anode materials that can initiate the water splitting process even in the low-energy end of the rainbow—red light.

Excited, negatively charged electrons and the protons from the water accumulate at a structure called the cathode, where they can be added to CO2 to make energy-rich hydrocarbons in a process known as CO2 reduction.

To make CO2 into even a simple hydrocarbon like ethylene, there are several steps of making and breaking bonds between atoms. For each step to occur at a reasonable pace, a catalyst is required to reduce the amount of energy needed to make or break these bonds. Copper has been studied extensively at JCAP for its ability to form two-carbon molecules like ethanol and ethylene. Dr. Junko Yano, a Senior Scientist at Lawrence Berkeley National Laboratory and Principal Investigator at JCAP who has done fundamental studies on both natural and artificial photosynthetic systems, admits it “is far from the ideal catalyst.” According to Yano, “Progress includes … learning how to do photo-driven reduction, which does not happen in natural photosynthesis.” In contrast to water splitting, CO2 reduction on copper and in plants is not driven directly by sunlight. In plants it is driven by the energized electrons produced in water splitting. However, most inorganic anodes do not give these electrons enough energy. A light-absorbing semiconductor at the cathode could ensure electrons have the extra energy they need to reduce CO2. “Coupling that to sunlight is much harder,” says Persson. “There are efforts on understanding how catalysis works on copper metal and then maybe we can find materials that can absorb visible light and exhibit similar properties.”

Many of the best water-splitting catalysts developed so far show optimal rates in highly corrosive alkaline conditions, while many potential catalysts for the cathode reaction with CO2 perform best and survive longer under milder, more neutral conditions. This makes it difficult to combine them into a durable working device. As Persson puts it, “A lot of ongoing basic research does not consider long-term stability as a requirement … in order to actually make something work in the real world I believe we have to incorporate design for stability into the discovery process.” Researchers at Berkeley Lab’s Molecular Foundry have adopted this strategy and developed water-splitting co-catalysts made of a mixture of relatively abundant and inexpensive elements—nickel, cobalt, iron, and phosphorous—that they claim can outperform the catalytic ability of the leading precious metal compound in neutral pH.

Will fuels produced by artificial photosynthesis feed our engines in the near future? Probably not. A set of materials that meets all the necessary criteria remains elusive. “We’re not there yet in terms of finding the material” says Persson, but she emphasizes that artificial photosynthesis is a worthy long-term goal. “We need to figure out what is out there,” she says. “We need to create possibilities.”

Dana Goodacre is a graduate student in chemistry.