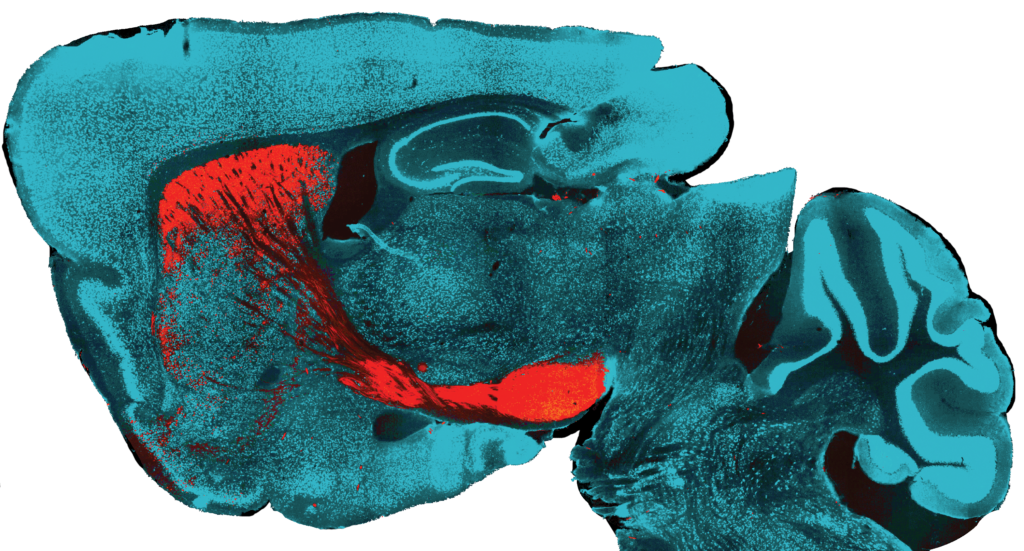 Sagittal section of a mouse brain showing striatal neurons of the direct pathway (red) projecting to the substantia nigra pars reticulata, the output structure of the basal ganglia. Bateup's lab is studying how mutations in autism risk genes affect the activity of this basal ganglia circuit.

The underlying causes of neurodevelopmental and psychiatric disorders, such as autism spectrum disorder (ASD), are challenging to understand. Even when researchers can identify a genetic mutation that causes ASD, the precise way in which the mutation affects the brain is often mysterious. Researchers in the lab of Dr. Helen Bateup have made strides in understanding one such mutation by honing in on how its effects differ in different types of cells within the brain.

The gene in question is called TSC1, so named because mutations within these gene can cause tuberous sclerosis complex (TSC)—a genetic disorder with a high incidence of tumors, seizures, and autism. To model the human disease, researchers deleted the TSC1 gene in the mouse striatum, which is a region of the brain important for behavioral choices and habit formation. The result was striking—while some types of striatal neurons were unaffected, others became more likely to aberrantly fire off signals to other cells. This research presents a new and interesting explanation for how mutations in the TSC1 gene might cause autism. Neurons that fire inappropriately might give rise to the repetitive and inflexible behaviors that are characteristic of ASD. For now, why some mutant cells within the striatum become hyperactive while others do not, and how their hyperactivity contributes to neurodevelopmental disorders, remain intriguing questions for future research.

The Bateup lab’s findings add to an emerging pattern in ASD research. “While mutations in ASD risk genes frequently impact neuronal physiology, the specific consequences of these mutations are cell type-dependent,” says Bateup. Not all neurons are exactly alike, and understanding their differences may be key to unlocking the complex causes of ASD and other neurodevelopmental disorders.

A.J. Torre is a graduate student in statistics