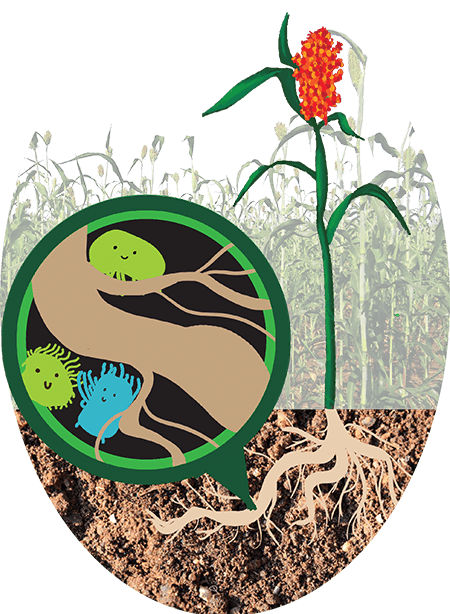 Actinobacteria growing on the roots of sorghum plants may provide a beneficial relationship by helping the plants survive arid climates.

In recent decades, biologists have discovered that the trillions of microbes that inhabit our skin and digestive tract profoundly influence our health. An unhealthy imbalance in these so-called “microbial communities” are now linked to malnourishment, obesity, and autoimmune disorders. Expanding from this research in humans, plant scientists are now seeing that specific bacteria can help crops withstand stressful environments. The Coleman-Derr Lab at the Department of Agriculture’s Plant Gene Expression Center is studying the microbes that affiliate with sorghum, a crop that can survive extended periods of drought that kill other cereal crops like corn and wheat. Using DNA sequencing to profile microbial communities, the team saw an overabundance of a distinct group of bacteria called Actinobacteria living around drought-treated sorghum roots. By analyzing the activity of microbe and plant genes as well as metabolites, there is good evidence that the sorghum root is releasing carbohydrates to feed the Actinobacteria. In turn, the Actinobacteria might be protecting the root. For instance, Actinobacteria-inoculated sorghum roots grew better than germ-free roots during a follow-up drought stress experiment. Tuesday Simmons, a PhD candidate in the lab, says it is currently unclear how Actinobacteria boost root growth. However, she posits that these microbes could be releasing “plant hormones that tell the plant ‘keep growing!’ even when external signals, such as drought, make the plant want to stop.” Understanding that specific bacteria can aid in growth during stressful environmental events might provide microbe-based treatments, similar to humans taking probiotics, to enhance crop yields.

Tim Jeffers is a graduate student in plant and microbial biology