Most of us have been there: delicately balancing an overflowing cup of coffee while rushing to work. Some of us have even risked a light jog with our precious cargo. This careful balancing act may be impressive for a human, but it hardly matches the stunts regularly performed by hummingbirds. Professor Robert Dudley, the principal investigator of the Berkeley Flight Lab (BFL), compares a hummingbird feeding at a flower to a person “sprinting on a treadmill, while drinking a latte, and doing it with sub-millimeter stability.” What’s even more remarkable is that hummingbirds, many of which live in the rain-soaked tropics, continue this flying feat in adverse weather conditions without any major decrease in stability. Scientists at the BFL are interested in characterizing how hummingbirds fly, and in particular, how they fly in rain, turbulent air, or confined spaces. With that knowledge, they hope to both gain a better understanding of how flight evolved in nature, and improve the way flying machines are developed. 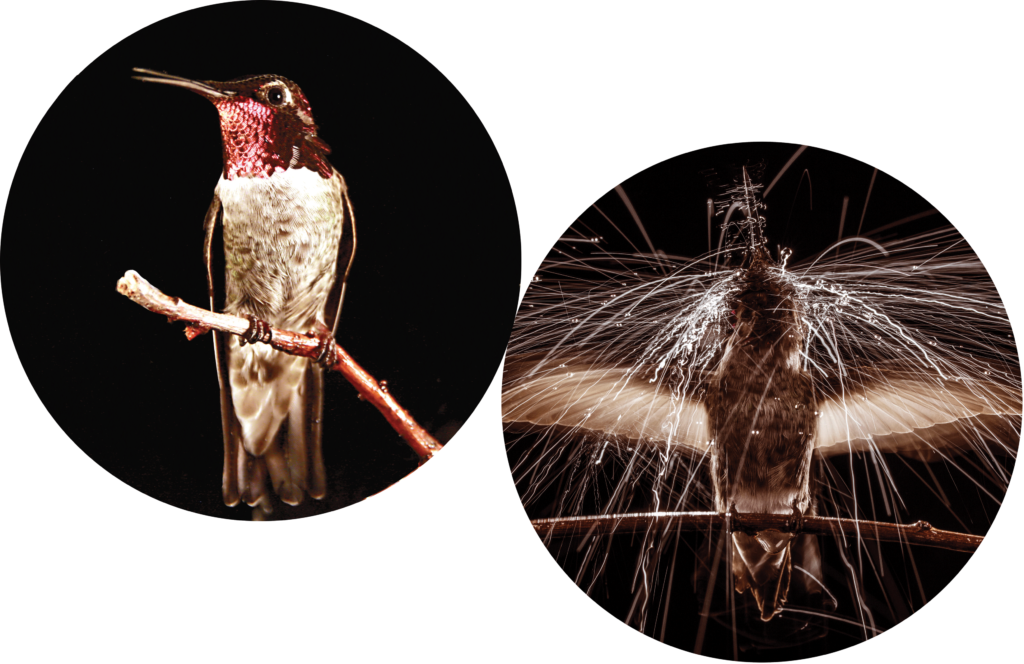 An Anna's hummingbird shakes off simulated rain, while perched on a branch in the Berkeley Flight Lab.

Hummingbirds are an ideal model organism for studying flight. They have a much larger flight envelope, or range of flying skills, than other birds—most birds can only fly forward, but hummingbirds can also hover, fly vertically, and fly backwards. They are also larger and easier to observe than insects, but they are not so large that they can’t be handled in the confines of a typical laboratory space.

Bringing hummingbirds into the lab makes it easier to study them mid-flight, but they still beat their wings 45 times per second, which appears as a blur to the human. To slow down wing movements for the human eye, BFL researchers use synchronized, high-speed cameras to track the birds as they fly in three-dimensional space. They also employ more complex technologies, such as laser sheets, to visualize the flow and measure the aerodynamic forces created by the beating of the birds’ wings. Once a hummingbird’s activity has been dramatically slowed, more exact parameters—such as their flapping frequency or flight speed—can be calculated.

When former postdoc Dr. Victor Ortega-Jiménez first arrived at the BFL, he set out to determine exactly how hummingbirds manage to fly in the rain. Flight in the rain may seem trivial, yet a hummingbird flying in light rain will accumulate approximately 20% of its mass in raindrops in just one minute. That additional weight is equivalent to a 150-pound human gaining 30 pounds, or over 3.5 gallons, in rain water. Since that weight increase would be unsustainable during a daylong search for food, Ortega-Jiménez reasoned that hummingbirds must have some mechanism of drying themselves mid-flight.

To study how hummingbirds dry themselves in the laboratory, Ortega-Jiménez built a rain simulator that sprinkles water on the hummingbirds, allowing him to observe the birds’ flight in light, moderate, and heavy rain. He found that wet hummingbirds shake their head and body back and forth—much like a wet dog—to remove the majority of the accumulated water in a matter of milliseconds. He also discovered that the exact mechanics of their shaking change depending on whether they are perched or flying. When hummingbirds are perched, they shake much faster and shake their head, body, and wings all at the same frequency. However, when they are shaking midair, the birds’ wings must briefly switch out of sync to compensate for the dramatic body movement. These observations help explain how hummingbirds—in contrast to most other birds, who take shelter during storms—keep themselves dry and continue flying in the rain.

Ortega-Jiménez’s model for flying in adverse conditions has contributed to a growing body of work on natural flight. Many groups—including bioengineers in the BFL—are using their discoveries as inspiration for artificial flying machines, but there are still many hurdles to overcome before hummingbird-like drones ever take to the sky. According to Dudley, in order to truly mimic hummingbird flight patterns, our flying machines will need “a really great nervous system” and much better stabilization mechanisms than currently existing ones. However, he is optimistic that scientists can continue to learn from these birds in the meantime. For example, hummingbirds may precisely tune their wing movements to minimize the amount of drag created by their wings, which in turn helps minimize their energy consumption during flight. If scientists can better understand how the birds conserve energy during flight, they may be able to improve the currently limited flight time for most drones.

Even if engineers are unable to mimic the exact mechanics of hummingbird flight, the research conducted at the BFL provides a small window into how hummingbirds navigate the world around them. You may never be able to jog to work while sipping coffee, but perhaps you will better appreciate the amazing display of coordination the next time a hummingbird flits past.

Eric D. Lee is a graduate student in infectious diseases and immunity.