When I met with Professor Kurt Cuffey, renowned UC Berkeley glaciologist, I expected a grizzled nomad who spent his career roaming the arctic with no need for a stuffy office. I quickly found that while Cuffey has indeed been on many expeditions to places like Greenland and Antarctica, most of his time is spent inside, sitting in front of a computer analyzing data and solving equations. Fortunately for me, his brand new computer was acting up the day we met, so he had plenty of time to tell me about his work studying glaciers.

KD: Could you give me an overview of what you do as a glaciologist?

KC: I work on glaciers in three broad areas. One is through climate and how the glaciers record climate change. A second is the dynamics of ice masses, which includes how they flow and how they react to climate changes and other external processes, such as sea level rise. The third category is what we call glacial geomorphology, and that’s studying the set of processes by which glaciers scour the bedrock landscape to create landforms.

I’m not a scientist who’s specifically tied to one tool. I collaborate with a lot of people who are in command of different methods, but what I work on really changes from time to time. I do some fieldwork, I do some work on ice cores, I do a lot of work on the computer doing numerical modeling.

KD: How did you become interested in studying glaciers?

KC: Two threads really started it. My father was a paleontologist—so I was exposed to the earth sciences long ago. The other contributing factor was that although I grew up in Pennsylvania, I would take trips out to the American West with my dad and my brother. I really became fascinated and enthralled with mountain landscapes in particular. When I was old enough to start traveling on my own, the first place I spent a lot of time in was Glacier National Park in Montana. I was captivated by the spectacular scenery that is created by glacial action: the deep valleys and sharply sculpted peaks. About this time, I also learned calculus, and that opened up a lot of scientific literature that was previously inaccessible to me. Those two things together convinced me that I would try to be a landscape scientist. Glaciers were part of the landscapes I love. 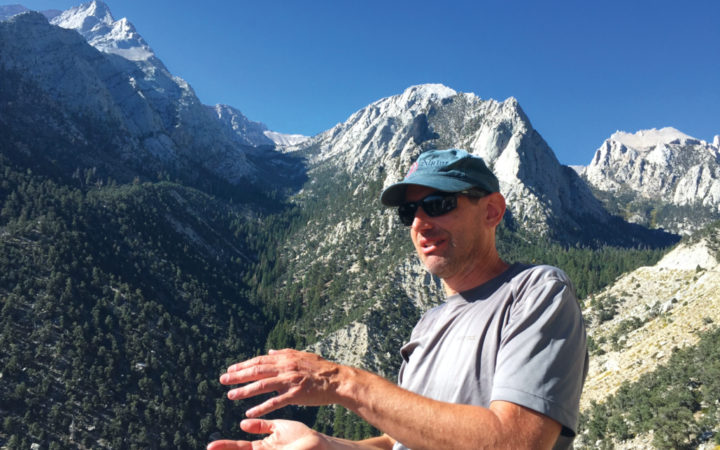 KD: You mentioned you do some fieldwork. Could you tell me about your last trip and what that project involved?

KC: The last big glacier fieldwork project was in the Canadian Rockies. Our goal was to study the dynamics and the erosional processes of an ice mass at the head of the valley. We installed a survey network on the glacier—putting posts in the ice and then measuring their positions using high-resolution GPS—to measure how fast the ice is flowing and melting. We also used a radar system to image how thick the glacier is, which is very important for understanding the dynamics and seeing the topography of the bedrock.

KD: What are some of the technical challenges that come with that kind of fieldwork?

KC: This was a very remote, high site, and there was no cheap or easy way to get all of the supplies in. Helicopters are a very expensive item, so that’s a big part of the budget. It limits what you can do, for sure. There’s also the hazard of crevasses and other sorts of cavities in the ice. I had one of my graduate students step through a snow bridge into a crevasse below. Fortunately he didn’t fall down into it. That was scary.

KD: You also mentioned you do some work on ice cores [long, vertical samples of ice drilled from a glacier]. Where do these samples come from? What information do they provide?

KC: Most recently, I worked on a climate history project that is centered around an ice core from Central West Antarctica. The core, which is extracted in pieces, is a cylinder about three and a half kilometers long and twelve and a half centimeters in diameter. It’s a very expensive thing to do—a multi-million dollar project. I’m one of something like 30 principal investigators on the project. To extract the core, we contract with drilling experts arranged by the National Science Foundation. The core gets taken from this remote place in Antarctica, shipped on an airplane to the coast of Antarctica, comes back in a freezer on a boat to the coast of California, and is then shipped to the US National Ice Core Laboratory in Denver in a set of freezer trucks.

Part of my funded project was to send my colleague from the United States Geological Survey, Gary Clow, to the ice core site in Antarctica. After the core is extracted, there’s a hole, called a borehole, that’s left in the ice. Gary measures the temperature in the borehole to a very high precision, so we get a profile of temperature as a function of depth, going from the surface to three and a half kilometer depth, close to the bed. Those temperatures retain some remnants of the past climates—the cold of the last ice age is preserved to some extent at depth in Antarctica. 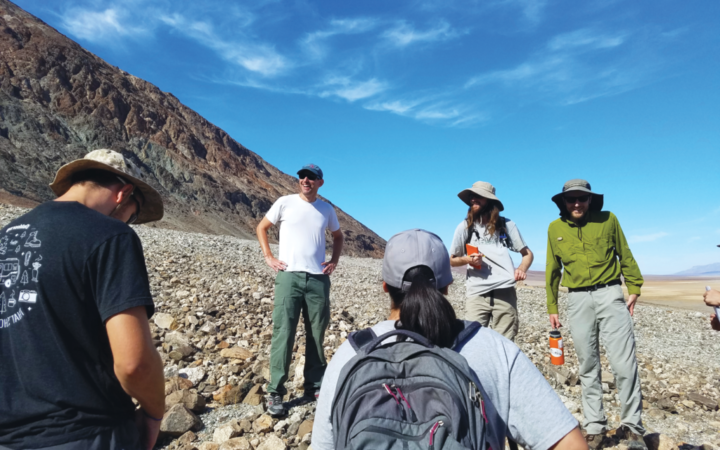 KD: Are there other types of data that go into understanding temperature history?

KC: Yes, absolutely. The analyses of the borehole temperature have to be combined with other measures from the core. A bunch of people descended on the US National Ice Core Laboratory to chop the core into pieces, and those pieces got sent off to labs where they are measured for different properties. Colleagues at the University of Washington and the University of Colorado measure the composition of the oxygen and hydrogen composing the ice itself. Colleagues at Scripps and at Oregon State measure composition of the trapped gases in the ice. Combining those two types of indicators with the borehole temperature measurements allows us to reconstruct how the temperature has changed over time. It’s very collaborative.

KD: It sounds like there is a lot of computational and analytical work that goes into processing these data. Is that true?

KC: In both of those projects—the Canadian glacier fieldwork project and in the ice core project—a lot of what I do involves sitting at a computer. It’s sad to say perhaps, if you had the vision of the hero glacial explorer, well-dressed in fur-lined jackets and so forth. That does happen, and I’ve done all that, but it’s a small fraction of the total time. What I mostly do is I sit at a computer performing data analysis and numerical modeling.

KD: Maybe I’ve over-romanticized the whole fieldwork gig. When you sit down at a computer to analyze data, what are you doing?

KC: We have data that came from an ice core or from measuring the flow and thickness of a glacier. What we want to do is have the data speak to us and tell us something about the system. The flow properties of the ice, or the climatic temperature history, for example. To simulate the flow of a glacier, I write a numerical model. The math looks sophisticated but is actually quite simple. It’s taking Newton’s laws of conservation of mass, writing them in the correct way for the system, combining them with some very material-specific properties, and then solving these equations. In principle, you could solve it just with your calculator, but it would probably take a million years. So I use a computer that’s designed to function as a million of you, reduced in size and stuffed into a little computer, churning away at my behest. A lot of the work that I can do simply would not have been possible forty or fifty years ago because the computing power wasn’t available.

KD: How has being at UC Berkeley shaped your research?

KC: I like to hear what other people are working on—both in the physical sciences and the social sciences. I have my home here in the geography department, and I have an appointment in the earth and planetary science department. Between these two departments, I can learn about what is happening in geophysics, but I can also learn about economic interpretations of social problems and cultural politics and so forth. Consider a problem like global warming. Fundamentally, it’s neither just a physical science problem nor just a social science problem. It’s some mixture of both, and to tackle it we really need to bring in the humanities, too. It is good to be in a place like UC Berkeley with such diverse intellectual engagement.

Katie is a PhD student studying immunology. She not-so-secretly wishes T cell research required some fieldwork in the mountains.