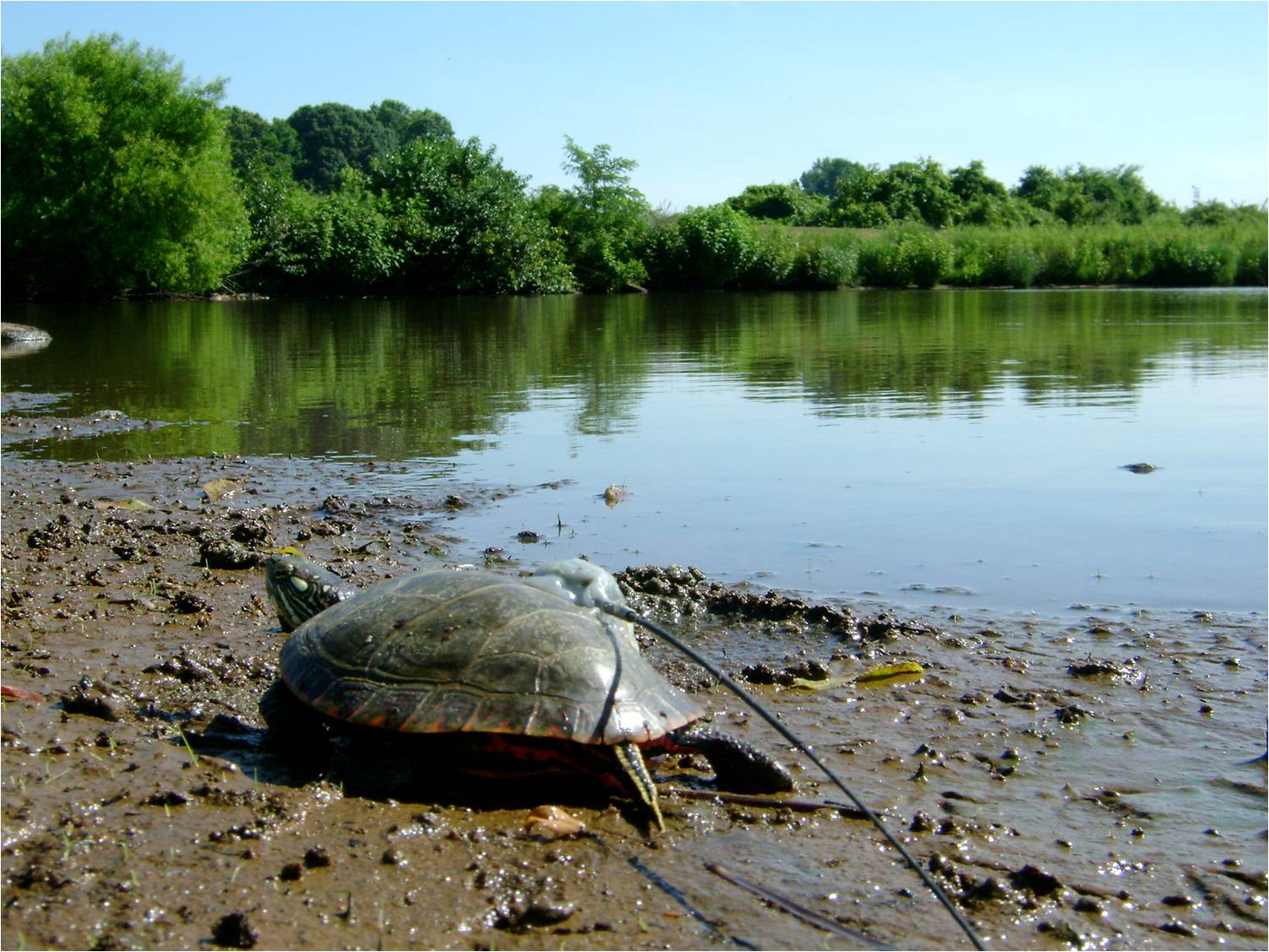 The painted turtle, a good-looking reptile![/caption]

Turtles are stereotyped as moving so slowly that you might not think about the fact that turtles can move quite quickly, especially when they have somewhere to go! The painted turtle (Chrysemys picta) is one of the most common turtle species native to the United States. These reptiles primarily hang out in fresh-water ponds and eat watery foods like algae, plants, and fish. But how would turtles cope if their home-pond disappeared? Given the major climate changes that are happening at a rapid pace, it is often difficult to predict the repercussions of these changes until it is too late. But once in a while, a study site gives scientists the perfect opportunity to test hypotheses about how animals respond to habitat change.

A new manuscript “The Role of Age-Specific Learning and Experience for Turtles Navigating a Changing Landscape,” published this month in Current Biology, details just what happens to turtles that lose their habitat and lose their way. The results suggest that turtles have a critical period for learning information about their environment, which could have long-term repercussions on their behavior and survival. I corresponded with one of the study’s authors, Timothy Roth, to get more details. Start with a rapidly changing environment – say a pond that gets drained yearly. That’s exactly what Drs. Roth and Krochmal used for their study site, in a project that spanned five years. Two ponds on a farm in Maryland were fully and quickly drained (within 24-hrs) once a year to manage the local bird population and maintain wetland health. But many turtles use these two temporary ponds and must find a new water source each year when they are drained. In a sense, this drainage creates a problem the turtles must solve – adapting to a changing landscape to find a new place to hang out.

Radiotransmitters were glued onto 60 resident turtles that grew up in the surrounding area. The radiotransmitters allowed the position of the turtles to be recorded at least three to four times per hour. Timothy Roth notes, “Contrary to popular belief, these turtles can move relatively quickly when they want to. People have the general impression that turtles are slow. But this is not always the case.” The red paths show the movements of resident turtles from the drained ponds (T) to permanent ponds (P). Yellow paths are a sample of translocated adults. Image courtesy of Science Direct/Current Biology.[/caption]

One fascinating thing that happened is that ALL 60 of the resident adult turtles and a handful of local juvenile turtles used just one of four pathways to get from the drained pond to a new pond. The results took the authors by surprise, “We never expected these movements to be so accurate and repeatable. It is really quite amazing.” The turtles took around sixteen hours (on average) to relocate themselves to their new home. According to Roth, “We do not know how the paths were originally created or why those paths were used over others. What we can say is that the paths are not those of least resistance nor are they the shortest or straightest.”

These adult turtles, once establishing a route that worked for them, just stuck to it over the years; all turtles that were tracked for multiple years used the same path each year. On their first journey, the resident juveniles could have been following cues left by adult turtles, such as trails left by shed turtle skin and feces. “Following the leader” is not a likely explanation, as multiple turtles were never seen leaving the pond together or taking a route simultaneously.

So what happens if you take a naïve turtle that grew up in another pond, and plunk them down in your study site? Well, you might think, if turtles just use local cues, they’d pick up on the trails of the resident turtles, and use one of those four established turtle paths. And that’s exactly what translocated juvenile turtles did.

However, for turtles that were over four years of age, this was not the case. Of the thirty naïve adults, NONE of them were able to successfully find a new pond with water, even though these permanent ponds were less than 1 km from the drained ponds. Instead, these adult turtles wandered in rather circuitous paths, sometimes even crossing the established resident turtle routes, but never picking up on them. The study authors had to abort this part of the study after three weeks to return the naïve turtles to their old pond, as the turtles were losing significant amounts of weight and had not yet found a source of water. Scientists are still researching which cues turtles rely on for navigating through a complex environment (like this one).[/caption]

The results suggest some form of crystallized learning happens during the early part of a turtle’s life. Early experience may be dependent on environmental cues, but later navigation depends on early experience, rather than environmental cues. I had to ask, can you teach an old turtle new tricks? Roth asserts, “Adult turtles certainly learn. Other studies in other labs train them in classic Skinner boxes and the like. However, in our ecological situation, there seems to be no learning of paths by any individual over the age of three. There is likely a developmental constraint on learning, perhaps as a function of changing neural functioning.”

Like all good studies, this one leaves us with just as many questions as answers. Why did the turtles choose those paths in the first place? Could stress be affecting the adult translocated turtles somehow? Roth and Krochmal will continue to examine the possible mechanisms behind this route learning during the critical period, including a deeper examination of the use of UV cues in the field. They also hope to also examine the effects of stress on turtle navigation as part of their continuing research.

This study demonstrates the importance of early learning in the turtle to their adaptability to a changing environment. Juveniles appear to adapt to new environs, but it’s not clear this would be true for adults. For the adult painted turtle’s sake, we should all hope they don’t find themselves a stranger in a strange land, as these reptiles just might wander in circles and die before finding a new water source!

Photos and images courtesy of Timothy Roth and Aaron Krochmal.